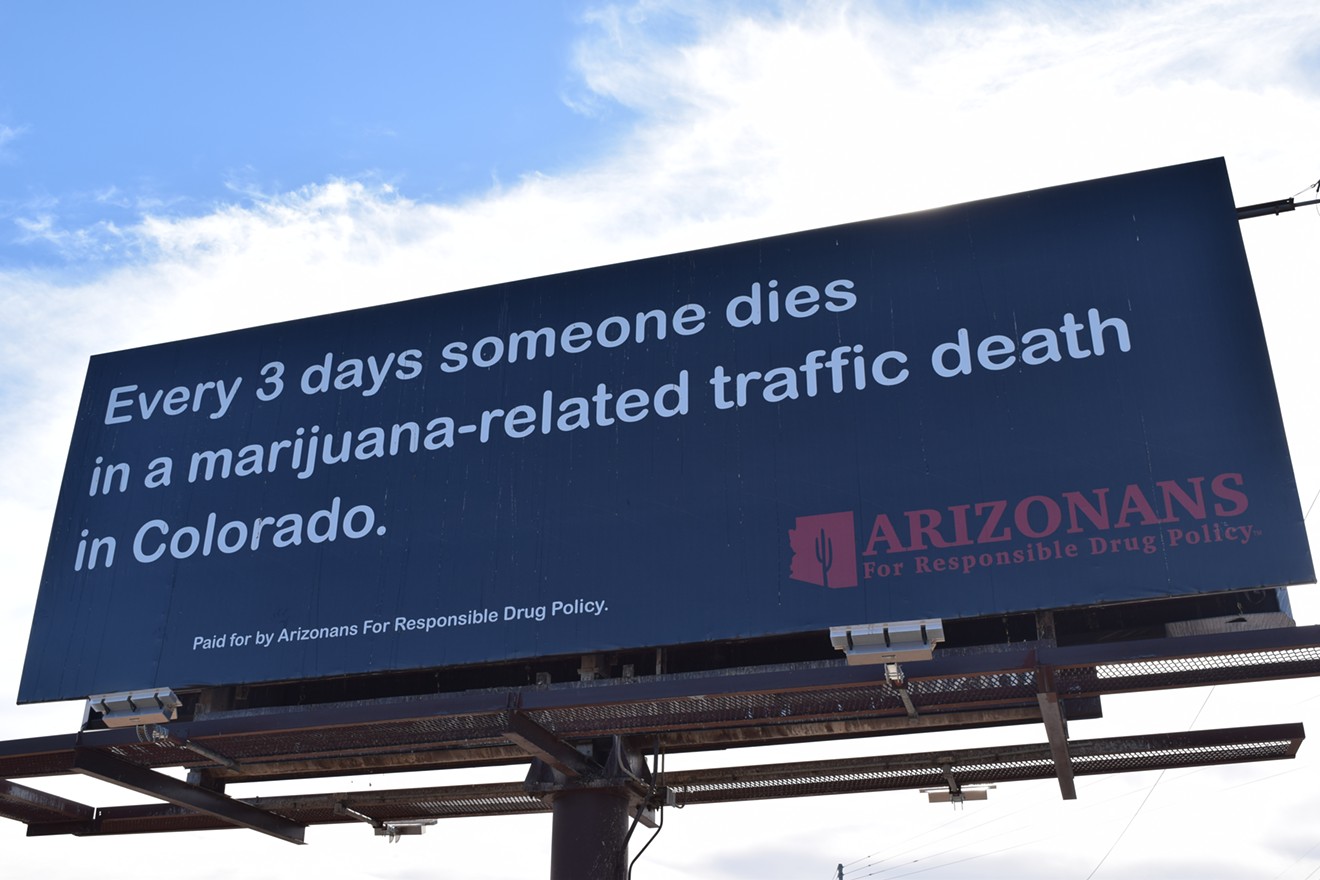 A billboard on 16th Street and Indian School Road from the advocacy group Arizonans for Responsible Drug Policy. Joseph Flaherty
An anti-marijuana advocacy group is hitting back with its own "scared straight"-style of ads in response to Phoenix-area billboards from a marijuana app company.

The anti-pot group Arizonans for Responsible Drug Policy is rolling out a billboard in Phoenix that cites increased traffic deaths as a result of marijuana legalization in Colorado.

On one of the group's five billboards, just south of Indian School Road on 16th Street, ARDP claims that in Colorado, where voters legalized recreational marijuana in 2012, there is a marijuana-related traffic death every three days.

The source on this claim is an October 2017 report from the Rocky Mountain High Intensity Drug Trafficking Area (HIDTA). It's ARDP's only source for the statistic they cite on the billboard.

From the anti-drug group's statement touting the billboard campaign:

However, critics have cautioned against relying too heavily on studies like this from HIDTA, a federal task force created by the 1988 Anti-Drug Abuse Act. 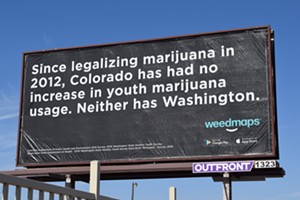 An Arizona anti-marijuana nonprofit called billboards like this one from app company Weedmaps false advertising.
Joseph Flaherty
Think-tank types, activists, and researchers — generally those who are more inclined to support marijuana legalization — say the task force is overly focused on negatively portraying the consequences of marijuana legalization in states like Colorado and Washington. After all, HIDTA is a federal body, and the feds still classify marijuana as a Schedule I drug.

Studies from HIDTA have faced questions before for mangling percent increases and bungling poll numbers. Even Colorado Governor John Hickenlooper criticized HIDTA stats when Attorney General Jeff Sessions referenced them in a recent letter on marijuana. Hickenlooper, along with the Colorado attorney general, pointed out that "data collection gaps rendered pre-2012 data incomplete."

And reports from the task force are also not peer-reviewed, unlike an article published in a scientific journal.

Merilee Fowler, the secretary/treasurer for ARDP, wrote in an email that the HIDTA report "obtained the data from the National Highway Traffic Safety Administration, Fatality Analysis Reporting System and Colorado Department of Transportation."

In late October, the app company Weedmaps came under fire from ARDP. The anti-drug group alleged that Weedmaps was guilty of false advertising for its billboards in the Phoenix area. The Weedmaps billboards show positive statistics about the effects of marijuana legalization.

A 501(c)4 nonprofit organization, ARDP is careful to note in its press release that no funds from the group's successful effort to defeat the 2016 ballot measure that would've legalized recreational marijuana in Arizona went to the new billboard campaign.