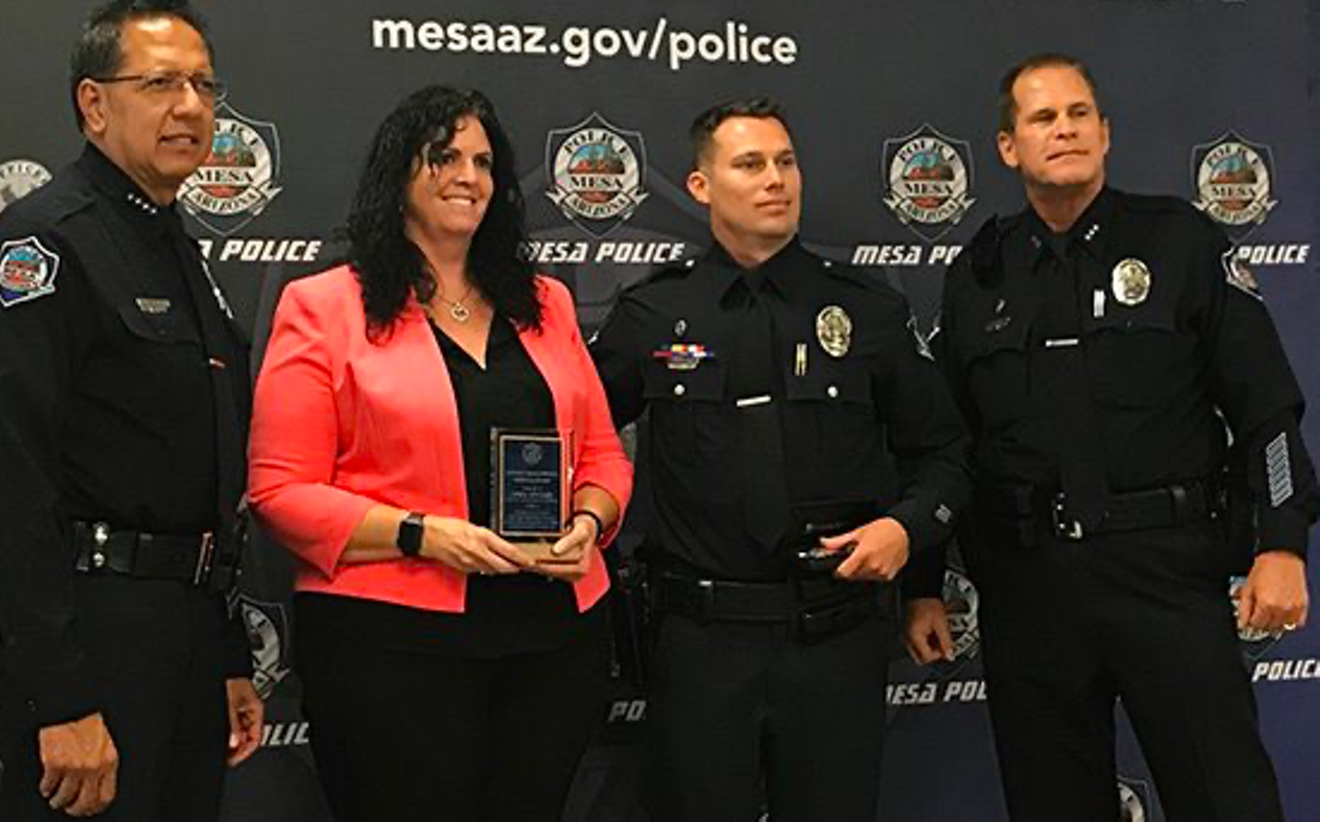 MCAO prosecutor April Sponsel receives an award from Mesa police in 2018. Mesa Police
April Sponsel, the prosecutor who ignited a major scandal when she brought bogus gang charges against Black Lives Matter protesters, is on her way out of the Maricopa County Attorney's Office.

After keeping Sponsel on paid leave for more than a year, the county informed her on Monday that they plan to fire her, citing multiple cases that she had egregiously overcharged. ABC15 broke the news of the county's plans on Tuesday evening.

The details of these new cases are damning. In one, Sponsel charged a man with felony assault on an officer with a "dangerous weapon." It turned out to be a nearby ballpoint pen, which no one saw the man holding. The charge would have forced a mandatory sentence of 10 1/2 years in prison.

Though the county has now formally informed Sponsel that it plans to dismiss her, the termination is not yet finalized. Sponsel will be allowed to respond at a meeting with the county next week. Asked about Sponsel at a press conference Wednesday morning, interim Maricopa County Attorney Rachel Mitchell said that because it was an "active personnel matter" she couldn't get into details.

However, Phoenix New Times obtained a copy of the 16-page dismissal letter against Sponsel that details the key failures of the 2020 gang prosecutions, which have been widely reported. But, notably, it also exposes serious flaws in several other cases Sponsel handled over the last few years.

"I find a disturbing pattern of excessive charging and a failure to review the available evidence," Chief Deputy Paul Ahler wrote in the letter to Sponsel. Termination, he concluded, was the "only appropriate option."

Attorneys for Sponsel did not return New Times' requests for comment.

In October 2020, Sponsel — a seasoned gang prosecutor at the county attorney's office — was the lead prosecutor on a case that brought criminal gang charges against more than a dozen Black Lives Matter protesters. The case hinged on the idea that the protesters' use of the common refrain "ACAB" (All Cops Are Bastards) amounted to gang membership.

Though she held a key role, Sponsel was just one of multiple prosecutors and law enforcement officials at the county and the Phoenix Police Department who worked to bring the charges. After public outcry began to mount, the county attorney's office dropped the charges. In March 2021, it placed Sponsel on leave. An investigation commenced, culminating in Monday's decision.

At the time she was prosecuting the gang case, Sponsel was part of the First Responders Bureau, a division dedicated to prosecuting cases where cops and other emergency responders were victimized. The bureau was ultimately disbanded last fall, in the wake of the ACAB gang scandal.

Before that, though, Mitchell took over the division in September 2021 and, she claims, reviewed Sponsel's record. "I was the person who identified those cases," she told press on Wednesday.

She found a concerning pattern.

First, there was the ballpoint pen case. This case dates back to June 2020, when a 25-year-old man was caught shoplifting from a CVS store. He had no prior record and had stolen only sunglasses and the pen from CVS. As of last winter, he was homeless.

Apparently, when Maricopa County Sheriff's Office deputies tried to arrest the man, he fled and then resisted. The ensuing struggle lasted about two minutes. Police reports claimed that in the course of this struggle, one of the officers suffered a supposed "puncture wound" that required medical attention. Officers saw a pen near the suspect's hand and surmised that he had "stabbed" the officer with the pen, though none of them testified that they had ever seen him actually holding it.

Photos of this supposed puncture wound raised doubts about the seriousness of this injury. Ahlers attached one in his letter to Sponsel, which was taken immediately after the alleged assault. 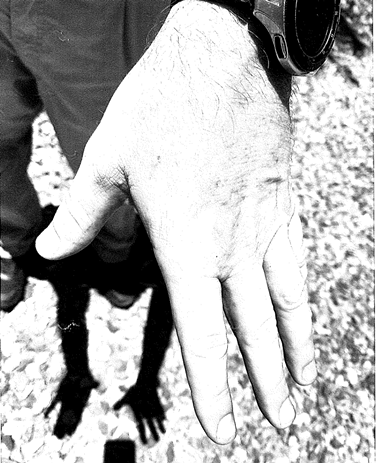 Evidence of the "puncture wound" was submitted by MCSO deputies.
Maricopa County

Despite the clear importance of the photos of the injury, Ahlers wrote, Sponsel never reviewed them. They also were not provided to the defense for nearly a year, when Sponsel went on leave. The assault charge against the man was dismissed, though the county is still charging him with resisting arrest with physical force, a class six felony.

Sponsel is being investigated by the Arizona state bar over her conduct in this case and others, according to court documents obtained by New Times that contain emails from a state bar investigator requesting grand jury transcripts of the cases.

Other Sponsel cases highlighted in the letter suggest similar issues.

Another also involved a protester, Richard Villa, who on August 9, 2020, was protesting at Phoenix police headquarters. It was the six-year anniversary of the death of Michael Brown, an 18-year-old shot and killed by police in Ferguson, Missouri.

In this case, Sponsel again filed a charge of aggravated assault against an officer, using a dangerous instrument. Here, the "deadly weapon" was a piece of fencing, which Villa pushed toward the officers, causing no injuries. This was captured on video. "When you received the video evidence, it should have been obvious that you did not have any good faith basis to pursue a charge," Ahlers wrote.

In another case, she charged a man with the same crime — aggravated assault against an officer — for pointing a gun at officers. But video evidence showed that, in fact, the man never had pointed the gun. He simply dropped it on the ground.

The letter, and the county's review, only dealt with Sponsel's most recent pending cases from 2020 and 2021, when she was part of the now-disbanded first responders unit.

But Sponsel has an 18-year tenure as a MCAO prosecutor. For years, she was a lead counsel on cases involving aggravated assault on law enforcement officers. She received glowing performance reviews as recently as last spring, she has alleged in court documents in her ongoing defamation lawsuit against the county.

In her lawsuit, which was filed in February, Sponsel claims that the county attorney's office and former County Attorney Allister Adel scapegoated Sponsel for the gang prosecutions — when, in fact, the entire chain of command approved of the charges.

"Everyone on the MCAO executive team, including Adel and others in her chain of command, was aware that Sponsel would be handling the [gang case] and approved of her handling the case," the civil complaint alleges.

Sponsel was informed by her supervisor, she alleges in court, that Adel and her second-in-command, Ken Vick, had approved of the gang charges. There was "no question" that Adel was aware of the charges, Sponsel claims. Vick is now facing a state bar investigation over his role in the prosecutions.

But armed with the evidence in this letter, the county seems to be making a case that the gang prosecutions were not an isolated event.


Mitchell said Wednesday that the county is open to looking back at older cases that Sponsel handled, but is not doing so proactively. "If there are some additional cases from the past, beyond the time that [Sponsel] was in the First Responders Bureau, that people have concerns about and want us to look at, we can certainly do that," Mitchell said.

The complete notice of intent to dismiss Sponsel, with some redactions by the county attorney's office, is shown below: