Screenshot from a 3-D medical animation of the coronavirus. Wikimedia Commons
click to enlarge 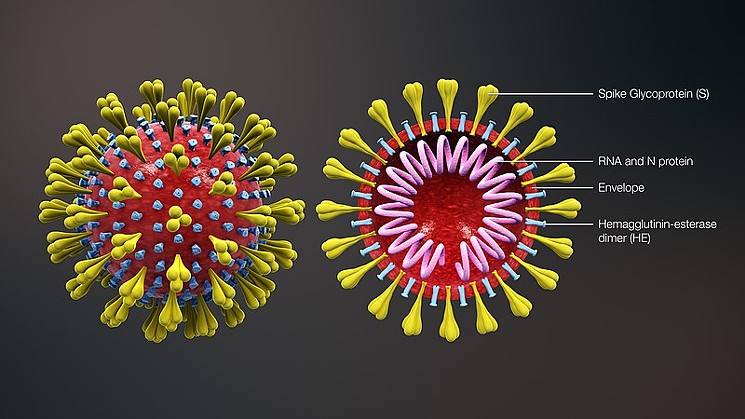 Screenshot from a 3-D medical animation of the coronavirus.
Wikimedia Commons
The highly transmissible Delta variant of the coronavirus is likely the "dominant" strain circulating in Arizona and is causing a new "surge," according to one of the state's leading experts.

After months of declining COVID-19 cases, new infections are now on the rise in Arizona. According to modeling from Arizona State University's Biodesign Institute, the weekly average number of new cases rose from around 400 in early June to almost 1,000 in late July.

Today, the Arizona Department of Health Services (DHS) reported 1,043 new cases and 10 new deaths. The spiking cases mirror a nationwide uptick in new infections, though Arizona is reporting some of the highest new infection rates in the nation, only coming behind states like Florida, Missouri, and Alabama, Centers for Disease Control and Prevention data shows.

"We had been trending down and now we’re clearly on an upswing," said Joshua LaBaer, the Biodesign Institute's executive director, during a media briefing today. "We are accelerating. We are seeing the beginnings of a surge here."


"A lot of it has to do with this Delta variant," he added. "We are probably dominant now with the Delta strain."

Steve Elliot, a spokesperson for DHS, wrote in an email that the Delta variant caused an estimated 68 percent of positive COVID-19 tests reported so far in July, based on genome sequencing of samples.

But this surge probably won't be like past surges during the worst of the COVID-19 pandemic. While the Delta variant is more transmissible than the original COVID-19 strain that upended the world last year, many people have been vaccinated against the virus. And health experts agree that the vaccines are very effective against the new Delta variant and preventing hospitalizations due to severe symptoms.

In Arizona, roughly half of the state's population has been fully vaccinated, according to ADHS. Locally, the data appears to illustrate this: Over 92 percent of new COVID-19 cases reported in June in Arizona were among those who either weren't fully vaccinated or hadn't received any doses, per ADHS. There are rare cases of vaccinated people still catching COVID-19, but those are anomalies.

"By and large it is a surge among the unvaccinated," LaBaer said. "The important take-home message is that the vaccines do work against this Delta variant."

LaBaer added that the new increase in cases likely won't overwhelm local hospitals as past surges did due to the significant number of people who have already been vaccinated. Other factors are contributing to the new spike alongside the circulating Delta variant, he said, such as Arizonans turning to indoor activities during the brutally hot summer months and people ditching masks as the pandemic appeared to be waning.

His advice? Avoid crowds and wear a mask if you're in such a setting. And get vaccinated. Now.

"This is not a time to participate in crowded events," LaBaer said. "And if you’re in a crowded situation, wear a mask."

More information about the available COVID-19 vaccines and how to get them can be found here and here.
KEEP PHOENIX NEW TIMES FREE... Since we started Phoenix New Times, it has been defined as the free, independent voice of Phoenix, and we'd like to keep it that way. With local media under siege, it's more important than ever for us to rally support behind funding our local journalism. You can help by participating in our "I Support" program, allowing us to keep offering readers access to our incisive coverage of local news, food and culture with no paywalls.
Make a one-time donation today for as little as $1.