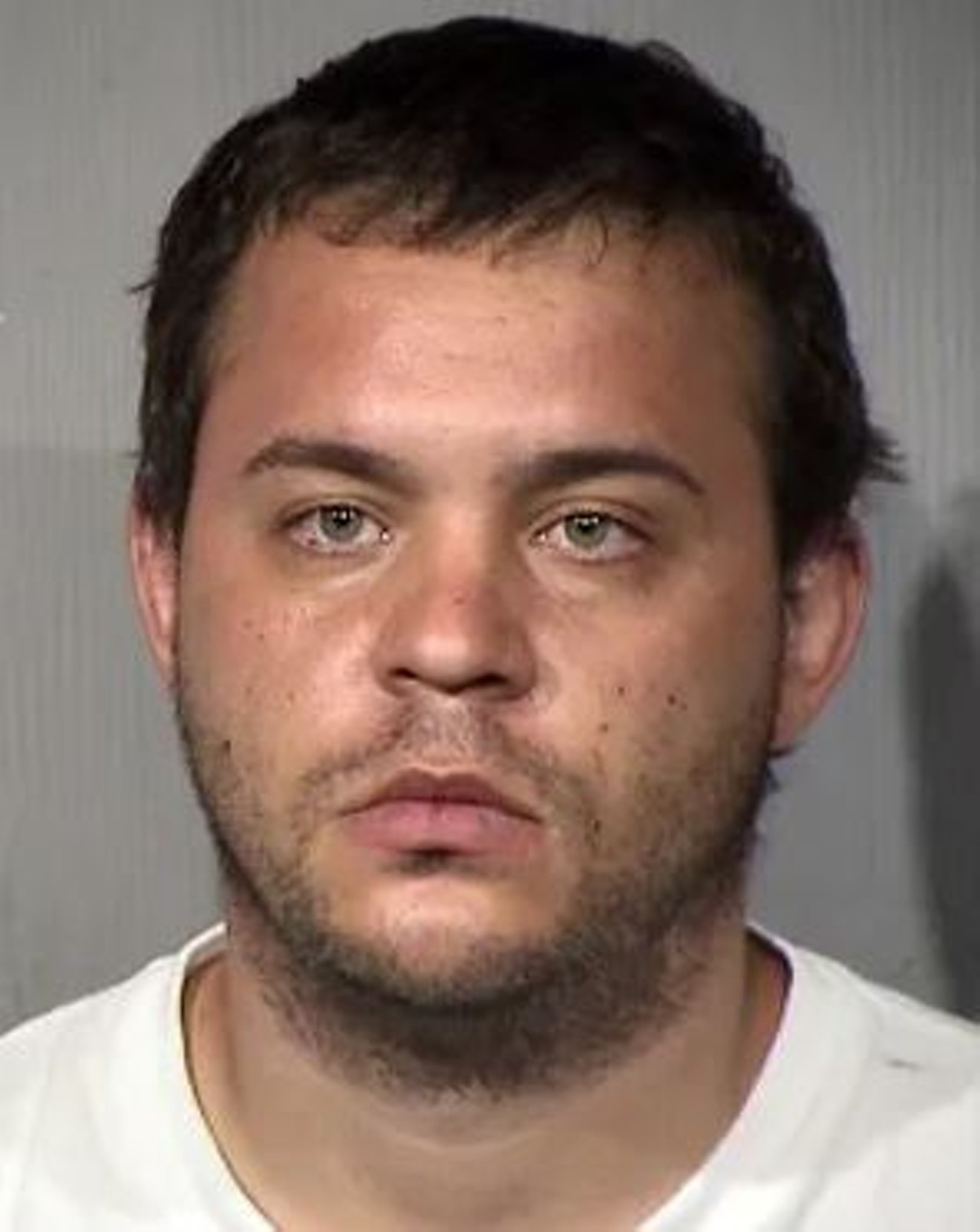 Matthew Egler, who's 29, is being accused of arson of an occupied structure following an investigation. A video released by police shows a man starting the fire at the building at Central Avenue and Thomas Road, which is shared by the Maricopa County and state Democratic Party. A small car Egler used in the crime was also recorded; it was registered to a family member, making it easy to find him. 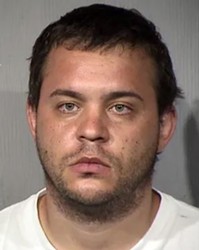 Matthew Egler
MCSO
Egler was a state committeeman from 2016 to 2019, according to his LinkedIn page, representing "Democratic Party Voters in Several Precincts in Legislative District 22 in Arizona." He'd been "recently banned from continued volunteer service," a police news release states.

(A local Democrat who asked for anonymity later confirmed that Egler had served as a state committeeman, but had been removed from the position in 2017.)

A Democratic candidate in District 22, Mary Honne, declined to comment to Phoenix New Times about Egler, saying, "I'm not going to give you any information." She referred the question to Bobbie Kithcart, party chair for District 22. Kithcart didn't return a phone call or email.

Egler states on LinkedIn that he is a former precinct committeeman for the Westbrook Precinct in Peoria, and a former groundskeeper for the city of Peoria.

He also lists himself as chairman of the board of directors and president of something called Valley Leadership Council, a company he founded that has nothing to do with Valley Leadership, a local leadership training organization.

Social media history shows Egler has made several delusional comments while representing the "council," including in April that he got Ivanka Trump pregnant.

Egler referred to his "love" for Ivanka in a video shared on social media, and in the same video confesses that he "took out a building." He added that he and Trump's daughter were "married in secret by the governor of New York," claiming he wasn't getting "responses from the senate" and that he was thrown out of the Supreme Court building on an apparent visit to Washington D.C.

The phone at the party HQ had a busy signal on Wednesday.

Rumors of "domestic terrorism" had spread over social media in the wake of the firebombing. The day of the explosion, Maricopa County Supervisor Bill Gates was among those airing his thoughts publicly about the possibilities.

Democrats of Greater Tucson
"Fire has officially labeled this an arson WE CANNOT LET TERRORISM STOP OUR WORK AS DEMOCRATS," tweeted the official site of Legislative District 9 Democrats.

The site linked to a statement on the Democrats of Greater Tucson, in which the organization's president, Larry Bodine, posts a photo of the damage inside the building. "We cannot let terrorism stop our work as Democrats," Bodine says, and goes on to urge people to donate to the group.

Bodine tells New Times he doesn't believe the statement requires a clarification after the news that Egler is a former Democratic volunteer.

"I think it is terrorism," Bodine said. "He's a Trump supporter who brags about bombing places."

Bodine added that he hadn't actually seen evidence that Egler is a Trump supporter. He said it didn't matter if he was, because the arson was intended to terrorize people.

No one was hurt in the fire, but it destroyed some memorabilia, including campaign materials for John F. Kennedy and "years of candidate and organizing materials," Maricopa County Democratic chair Steven Slugocki told local CBS affiliate KPHO-TV.

"'We are deeply saddened and shocked by today’s news, but appreciate the swift action by law enforcement to ensure that the suspect is in custody. This is a time for all Arizona Democrats to come together as friends and family. This unfortunate incident will not distract or deter us from achieving the goals we set in 2016. We remain committed to our mission to elect Democrats in November.

"As we work to navigate the process of finding a new home, we want to express our humble thanks and deep appreciation to all those who have reached out during this challenging time and have made generous donations. We thank you from the bottom of our hearts.

At this time, we will await further information from law enforcement as this situation develops.'"