Last week, a highly restrictive Texas law that bans abortions after roughly six weeks and empowers private individuals to sue abortion doctors or anyone who "aids or abets" abortion procedures went into effect after the U.S. Supreme Court declined to block it.

Now, at least one anti-abortion Arizona lawmaker is thinking about mimicking the Texas law. State Senator Nancy Barto, a Republican who backed Senate Bill 1457 — a controversial new law, signed by Governor Doug Ducey earlier this year, that bans abortions based on genetic abnormalities and threatens abortion doctors with jail time — tells Phoenix New Times that she is thinking about introducing a local version of the Texas law during the 2022 legislative session.

"I am seriously considering it, yes, but I can’t say for certain at this point," Barto wrote in an email. "We will be watching closely to see what happens in the courts with the Texas law and other pro-life laws moving through the federal courts, including Arizona’s new law prohibiting abortions of unborn children like those diagnosed with Down Syndrome."


Barto, who represents parts of north Phoenix in the legislature, went on to describe the Texas law, which is also referred to as Senate Bill 8, as a "novel approach." She specifically praised the component of the Texas law that authorizes members of the public to sue abortion doctors and other involved individuals. 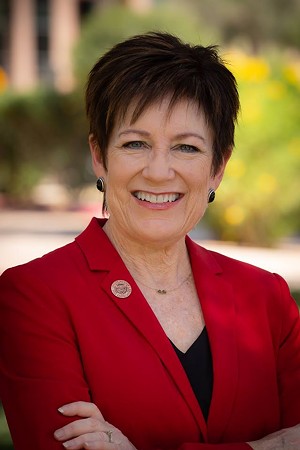 State Senator Nancy Barto.
azleg.gov
"By taking enforcement out of the purview of the government and its agencies and placing it solely in private citizens' hands – you remove all of the traditional obstacles in the courts," she wrote. "With the stiff penalties for a doctor violating the Texas heartbeat law, they're simply not willing to take the chance and continue performing them."

When asked if she has had direct discussions with other anti-abortion Arizona lawmakers about introducing a copycat bill next year, Barto wrote that there is "interest" among legislators in the idea.

Cathi Herrod, the president of the Center for Arizona Policy, an anti-abortion organization, also said in a statement that the Texas law could serve as a blueprint for anti-abortion activists.

"We may have a roadmap that the U.S. Supreme Court has allowed to go into effect," she said. "We wait now to see how the Court handles challenges to the law, and we go from there."

Murphy Bannerman, a spokesperson for Planned Parenthood Advocates of Arizona, said that a bill introduced by Republican lawmakers during the last legislative session that would have mandated that prosecutors file homicide charges against abortion doctors and patients patients was "more extreme" than the Texas law.

She added that abortion opponents feel buoyed by the Supreme Court's refusal to block the Texas law and its decision to hear a different abortion case out of Mississippi that could undermine Roe v. Wade, the 1973 ruling that protects abortion access nationwide.

"Our legislature is hostile to abortion and will most likely introduce something similar to Senate Bill 8," Bannerman said. "They see a pathway to banning abortion."

State Representative Walt Blackman, a Republican lawmaker who vehemently opposes abortion and sponsored the bill requiring homicide charges for abortion patients, did not respond to a request for comment on the Texas law.
KEEP PHOENIX NEW TIMES FREE... Since we started Phoenix New Times, it has been defined as the free, independent voice of Phoenix, and we'd like to keep it that way. With local media under siege, it's more important than ever for us to rally support behind funding our local journalism. You can help by participating in our "I Support" program, allowing us to keep offering readers access to our incisive coverage of local news, food and culture with no paywalls.
Make a one-time donation today for as little as $1.