A notice from the Arizona Department of Liquor Licenses and Control outside VLive's front door in November. Benjamin Leatherman

The director and deputy director of the Arizona Department of Liquor Licenses and Control resigned earlier this week, Phoenix New Times has learned.

Director John Cocca and Deputy Director Michael Rosenberger both stepped down, according to CJ Karamargin, a spokesperson for Governor Doug Ducey. 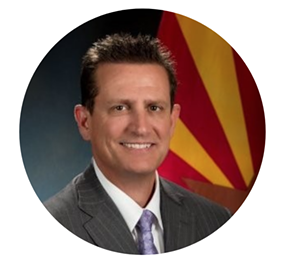 Director John Cocca resigned earlier this week.
Screenshot via LinkedIn
Colonel Heston Silbert, the director of the Department of Public Safety, will serve as interim director for the time being, he said.

It is unclear why they both resigned. Ducey's office didn't send out a press release regarding the turnover and Karamargin wouldn't comment further on the matter, stating, "We do not talk about personnel matters."

Cocca served as director of the agency since 2015 after a long stint as an assistant chief in the Scottsdale Police Department, according to his LinkedIn profile.

(This is a breaking story and will be updated.)
KEEP PHOENIX NEW TIMES FREE... Since we started Phoenix New Times, it has been defined as the free, independent voice of Phoenix, and we'd like to keep it that way. With local media under siege, it's more important than ever for us to rally support behind funding our local journalism. You can help by participating in our "I Support" program, allowing us to keep offering readers access to our incisive coverage of local news, food and culture with no paywalls.
Make a one-time donation today for as little as $1.