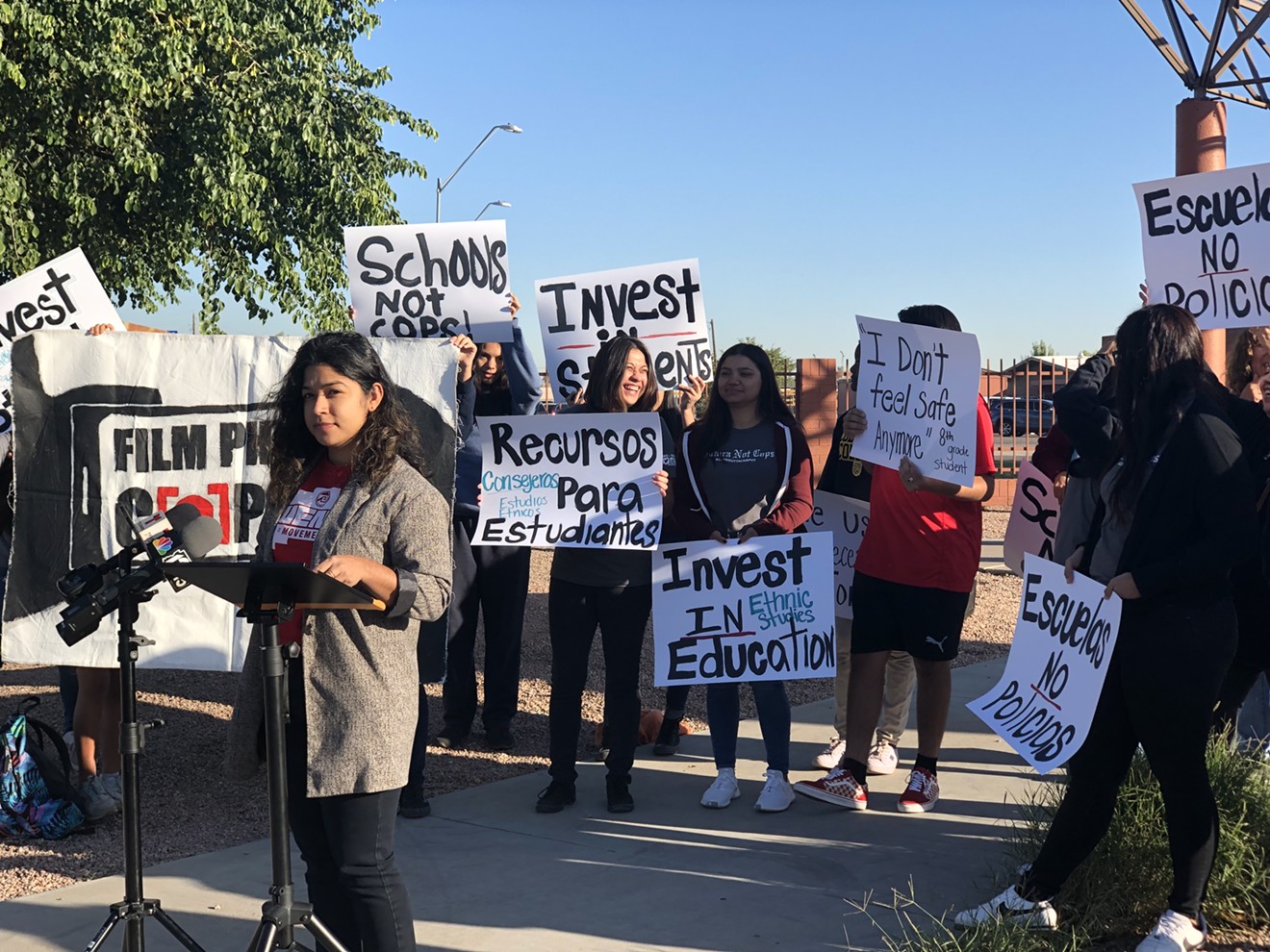 Students protest the use of school resource officers outside Isaac Middle School on October 28. Hannah Critchfield

The school resource officer who pepper-sprayed a group of middle school students and handcuffed another last month no longer works at Isaac Middle School.

The move comes despite Isaac School District’s conclusion of its investigation of the incidents, which found no evidence that the officer violated any district policy.

Neither the district nor Phoenix PD would give further comment on Vavrinec's departure as school resource officer.

Since the October incidents, several Isaac Middle School students and members of the migrant justice organization Puente Human Rights Movement have called for the officer’s removal. They’ve also requested the district end its intergovernmental agreement with Phoenix police and instead use the funding to hire additional counselors on campus.

The district did not inform community members of the officer’s departure, even when questions about the event eclipsed the public comment period of the district's governing board meeting on November 14.

Around 50 people, mostly parents with young kids, gathered at Moya Elementary School on Thursday night to hear the district’s updates and provide comments to board members afterward. About 20 of them were wearing gray “No Cops on Campus” T-shirts, and stood in solidarity as the first commenter began to speak.

"It’s been made aware to us that the school is using excessive use of force, particularly pepper spray, on children," said Isis Gil, a member of Puente Human Rights Movement who lives in the district. “We are here because we would like to be able to speak to the points of what happened on that day, but we still do not know the entirety of it. We have heard of intimidation and coercion by police officers at Isaac School … and we demand that you remove Officer Vavrinec from our school grounds."

Puente community members at the Isaac School District board meeting on November 14.
Hannah Critchfield
The coalition has previously criticized Isaac School District's lack of transparency on the incidents, particularly for failing to inform parents that pepper spray had been used on students on campus.

Isaac School District has said Puente never contacted it directly to ask about the incidents. Thursday evening's board meeting was an opportunity to do so, though the district was not obligated to respond to comments and did not immediately do so. Only two commenters, both from Puente, spoke at the meeting. The group's leaders wanted students from Isaac Middle School to share testimonials, but the students and other activists didn’t arrive in time to sign up ahead of the start of the meeting. Puente member Maria Castro alleged this was because parking was inaccessible.

After the two community members' time to speak ended, the board members moved to dismiss the public portion of the meeting. But another Puente member stood up.

“I just think it’s ridiculous that you won’t hear from community members who are standing right here asking,” the woman said.

Dr. Mario Ventura, the district superintendent, offered to schedule a meeting with the organizations another time.

“It still would be nice if the burden wasn’t on Puente members to schedule a meeting, and if the school could answer questions at a meeting already intended for the community,” another member from the group said.

All audience members shuffled out shortly thereafter, and the board members began their private portion of the meeting. No mention was made of Vavrinec's move.

James Milam, executive assistant for Isaac School District, said the district cannot comment on “any update in employment status” for school resource officers, as they are employees of the Phoenix Police Department, not the district.

Dr. Mario Ventura, Isaac School District superintendent, speaking with Puente community members after the end of the official comment period of the district's board meeting on November 14.
Hannah Critchfield
This technicality has been central to the coalition's critiques about the officer’s behavior on campus, and Isaac Middle School’s use of school resource officers in general: The school does not have its own rules about the ways school resource officers are to behave on campus, and instead defer to general policies of Phoenix police.

"Resource officers are [bound by] protocols established by their law enforcement agency," Isaac district policy states. This means the use of pepper spray on fighting sixth graders, or handcuffs on a student attempting to run away while being escorted to the principal’s office, are both within protocol.

Still, the state of Arizona is beginning to recognize the need for additional training for school resource officers, focused on understanding adolescent development, mental health, crisis intervention, and de-escalation.

The same day as the Isaac District board meeting, Governor Doug Ducey announced that the Arizona Peace Officer Standards and Training Board (AZPOST) would be offering an advanced training course for school resource officers later this month. The initiative was inspired and largely spearheaded by State Representative Alma Hernandez, the governor’s office said, after she spoke publicly on Twitter about suffering violence at the hands of a school resource officer while attending an Arizona high school.

The training, titled “Adolescent Mental Health Training for School Resource Officers,” is optional, though the state hopes to make future training sessions mandatory in the new year, according to Patrick Ptak, spokesperson for Ducey's office.

The Phoenix Police Department is not requiring its school resource officers to attend, but Sergeant Fortune said officers have been signed up for the training, and it’s the department's goal to have all of them participate.

Vavrinec, having returned to patrol, is likely not included in this group.
KEEP PHOENIX NEW TIMES FREE... Since we started Phoenix New Times, it has been defined as the free, independent voice of Phoenix, and we'd like to keep it that way. With local media under siege, it's more important than ever for us to rally support behind funding our local journalism. You can help by participating in our "I Support" program, allowing us to keep offering readers access to our incisive coverage of local news, food and culture with no paywalls.
Make a one-time donation today for as little as $1.
Hannah Critchfield was an editorial fellow for Phoenix New Times starting in 2019.