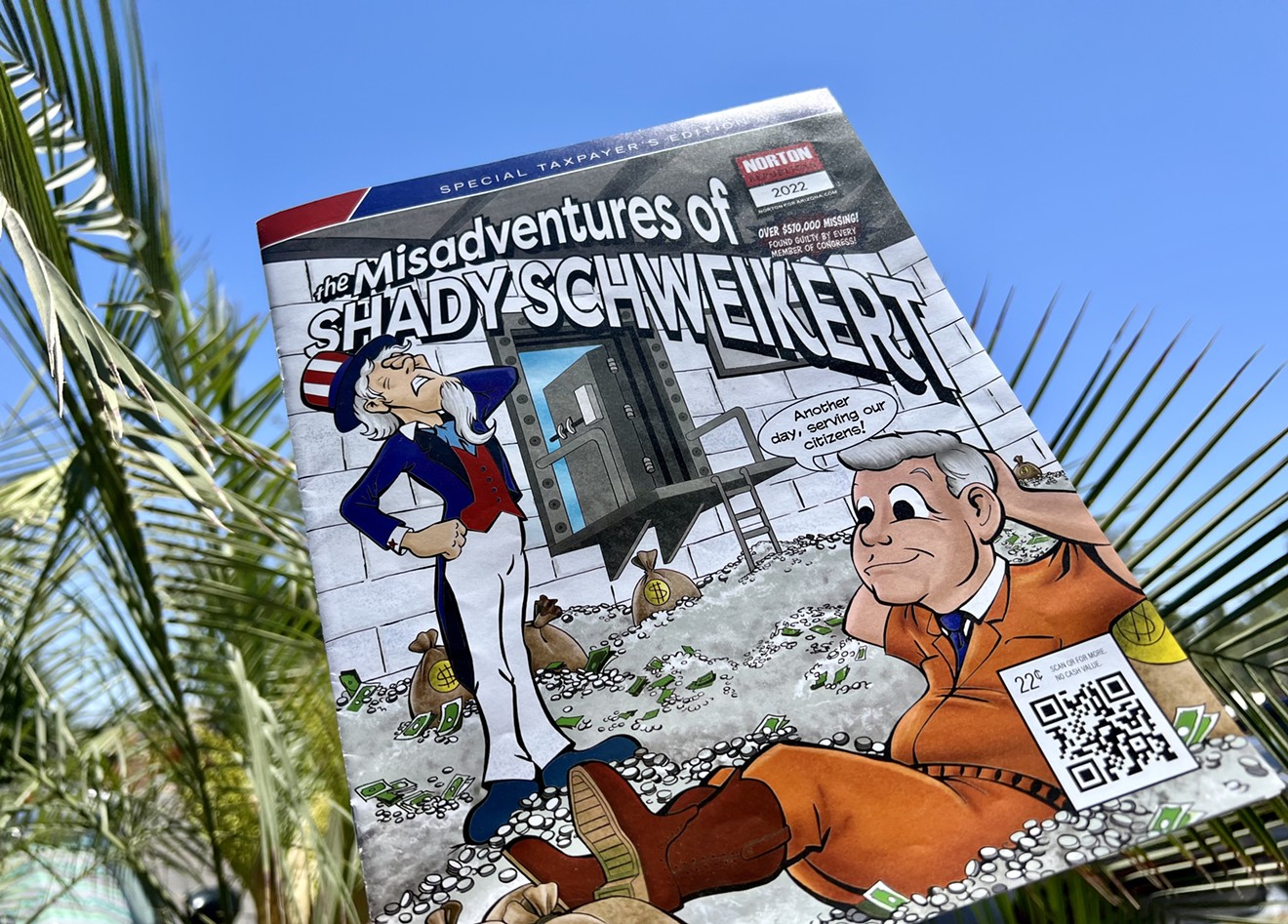 There’s a new supervillain in town, and he's terrorizing the people of Arizona.

At least that's the case according to new campaign literature coming from Elijah Norton, a political newcomer and entrepreneur from Scottsdale seeking to unseat U.S. Representative David Schweikert in this year’s Republican primary.


During election season, Arizona voters have come to expect unsolicited phone calls, emails, and canvassers at their doorstep. They might not, however, expect a political comic book to arrive in the mail alongside routine credit card bills and packages from Amazon.


But if you live in Arizona’s newly drawn First Congressional District, which encompasses parts of north Phoenix and north Scottsdale, Cave Creek, and Fountain Hills, there’s a good chance your postal carrier will soon deliver that political product to your mailbox.


Nearly one in three households in the reliably Republican district will receive a comic book in the mail this week from Norton’s campaign.


Like in Superman or X-Men, this graphic depicts the dealings of a supervillain. But it’s not Lex Luthor or Magneto. It’s Shady Schweikert, a besmirched caricature of the incumbent congressman clad in an orange jumpsuit and blue baby bonnet.


Through six pages of sequential storytelling, Shady Schweikert accepts illegal campaign contributions and writes himself a fake loan, blowing the cash on first-class flights, tickets to the Super Bowl, and fancy dinners.


He’s ridiculed by prominent Democrats and Republicans, including the rest of Arizona’s Republican congressional delegation: Paul Gosar, Andy Biggs, and Debbie Lesko. Then the cartoon shows him getting thrown in a jail cell. All the while, a star-spangled Uncle Sam slowly changes his opinion of the sixth-term congressman from skeptical naïveté to one of total disdain, ultimately deeming the miscreant “corrupt.”

“They’re grasping at straws,” Chris Baker, Schweikert’s political consultant, told Phoenix New Times. “We would expect nothing less than a comic from a joke of a candidate and a joke of a campaign. It really is the case of a fool and his money.”

The comic book plot centers around scandals from Schweikert’s 30-year career as a lawmaker. He’s painted as a criminal, but he never has been convicted of a crime.

"Elijah Norton has shown already that he can't be straight with voters and this is just another example," Baker said. "We're confident voters will see Norton for who he is."

Norton would have you think otherwise.


“David Schweikert’s crimes are very serious, but admittedly somewhat dry for voters with busy lives,” Brian Seitchik, Norton’s political consultant, told New Times. “We wanted to create something that would outline how he’s cheated taxpayers, citizens, and donors in an easily digestible manner.”


The Arizona House Ethics Committee reprimanded Schweikert on a number of campaign finance-related violations in 2020. In February, he agreed to pay a $125,000 fine to the Federal Elections Commission, stemming from a campaign finance blunder nearly a decade ago. It's not a crime, but that's not how Norton sees it.

"The only federal building Shady Schweikert should be allowed in is a federal penitentiary," Seitchik said.


The creative but splashy jab at Norton’s political adversary begs the question of whether it represents clever campaigning or a candidacy self-destructing.


It depends on who you ask.


“Voters are inundated by our campaign over a variety of mediums. We wanted to provide something that would make it very easy to track David’s multitude of crimes,” Seitchik said. “We felt a comic book would be the right medium to do that.”


According to the incumbent Republican from Fountain Hills, it’s a last-ditch effort to undermine a campaign in which political analysts say Schweikert is a strong favorite.


According to numbers from the Federal Election Commission, Norton has raised more than $3.5 million for his bid this year — with $2 million from his own coffers — while the incumbent Schweikert has raised just over $1 million largely from his supporters.


Self-funders have a long history of flaming out in Arizona, including: Jim Pederson, who lost his U.S. Senate bid in 2006; Buz Mills, who tanked in the Republican primary in Arizona’s 2010 race for governor; and Republican Steve Gaynor, who lost his bid for Arizona secretary of state to Katie Hobbs in 2018.


“There’s a reason why self-funders almost always lose,” Baker said. “I’m not surprised that a petulant little rich kid thinks he can buy an election. They think they can throw out outlandish accusations and the voters are going to buy it. It’s not going to work.”

Seitchik, a longtime adviser and Arizona state director under former President Donald Trump, believes there's a place in office for self-funders. He has strategized for other financially independent candidates in the past like Gary Podesto, the former mayor of Stockton, California.

"Thirty years a politician, 10 years a member of congress, $1.5 million in legal bills, $175,000 in fines, and all Shady Schweikert and his cronies can do is throw mud," Seitchik said. "Typical."


Norton’s campaign didn’t disclose on the record how many comic books were printed, but Seitchik said it’s “in the high tens of thousands.”


He also wasn’t willing to share who designed the neon strips, but said that after looking at several artists, “we felt that the person who did this was able to capture the essence of what we’re looking for.”


The playful art appears cutesy and innocuous but makes serious accusations about Schweikert as the two GOP candidates continue to fire shots at each other.


A car warranty company that Norton founded sued a super PAC for defamation on Sunday and sent Schweikert a cease-and-desist letter over a website that mocks the insurance executive and calls him a “scam artist,” New Times first reported on Thursday.


Now he’s firing back again with the comic book — “The Misadventures of Shady Schweikert.” Norton also has put out an accompanying video ad that permeated television channels, YouTube, and popular streaming services this week, encouraging voters to call his campaign office and claim a free copy of the comic book.


Seitchik says the comic book has been well received by present and future voters alike. It's not just a campaign ad, it's also educational entertainment for kids, he says.


“Children enjoyed reading the comic book and couldn't believe their congressman had committed those crimes. David is an embarrassment and an absolute shanda, frankly," Seitchik said, using the Yiddish word for a disgrace.

Seitchik also refrained from sharing the cost of the comic books, which were printed last week, citing “strategic purposes.” That information will become public with the next round of FEC filings next month.


Norton’s campaign first coined the Shady Schweikert moniker in an October television ad, where the incumbent was called “the most corrupt politician in Arizona history.”


On the back page of the new comic book, readers are urged to mail a faux coupon for “X-ray specs” that “see right through your Congressman” to Schweikert’s Scottsdale office on Northsight Boulevard.


“The Schweikert campaign believes voters are smart, and the Norton campaign and his consultant believe voters are dumb,” Baker said. “Our voters are not dumb.”


Norton will face Schweikert in the Republican primary election on August 2.