Arizona Rep. Walt Blackman: George Floyd Is 'Not a Hero,' BLM Is a 'Terrorist Organization' 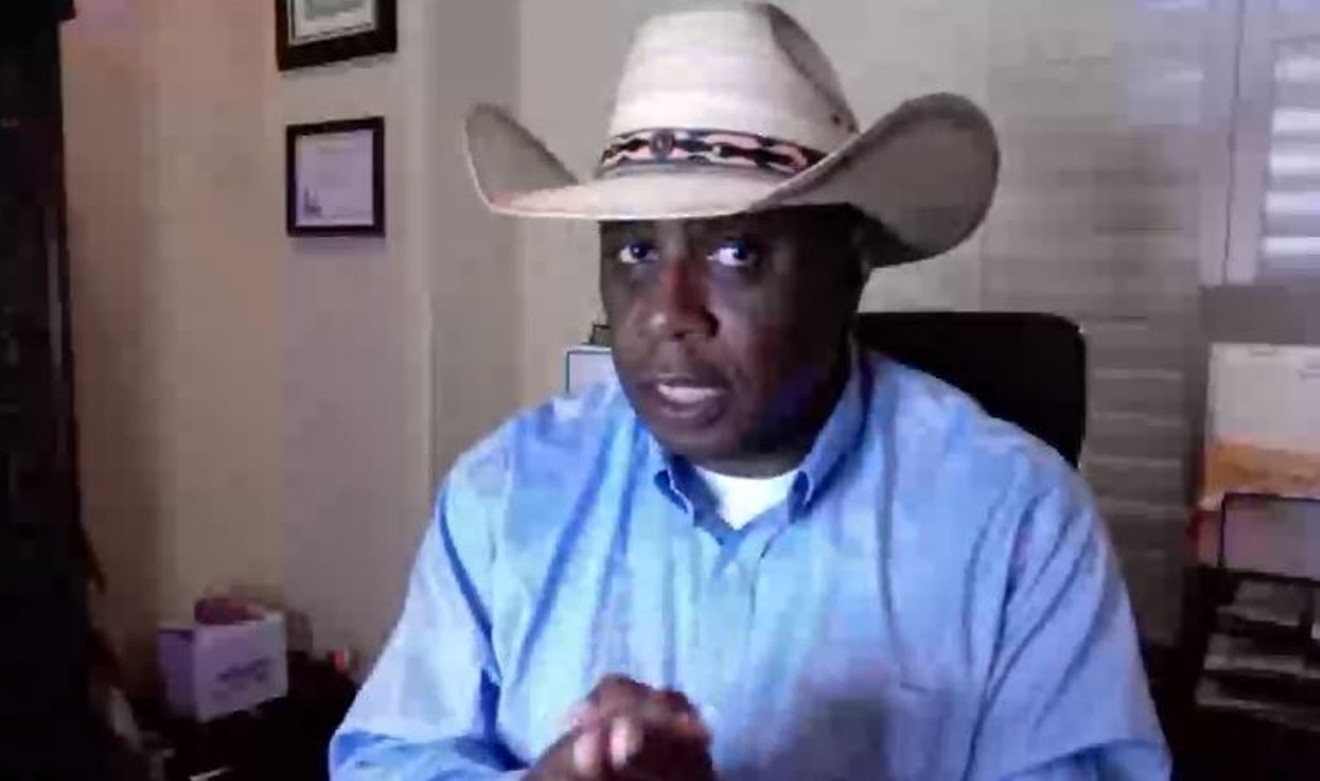 Not that he thinks Floyd deserved to be killed by a police officer, mind you. The Republican lawmaker from Snowflake — who, like Floyd, is black — points that out every few minutes in a lengthy video he posted to Facebook and Twitter today.

But the main theme of the video is that Floyd has a criminal background and "the left" should not put him on a pedestal.

I DO NOT support George Floyd and I refuse to see him as a martyr. But I hope his family receives justice. https://t.co/qf3Nd7RnKZ

Floyd died on May 25 when a Minneapolis cop arresting him on suspicion of passing a fake $20 bill snuffed out his life by kneeling on his neck for eight minutes. Video of Floyd's gruesome death inflamed people from coast to coast, pushing Americans into the streets for massive protests and resulting in a government crackdown that included nightly curfews. The now-fired officer, Derek Chauvin, has been charged with second-degree murder, and three other police who stood by as Floyd died have been charged with crimes.

"I DO NOT support George Floyd and I refuse to see him as a martyr," Blackman posted on his Twitter site on June 4 when he shared his video. "But I hope his family receives justice."

In the 47-minute video, Blackman is seen obtaining information from a viral video that right-wing activist Candace Owens published on Wednesday with essentially the same theme. Blackman rips the idea of putting Floyd's face on a T-shirt or portraying him as an "upstanding man."

"This individual is not cotton candy," he says. Floyd had been sent to prison five times, and once held a gun to the stomach of a pregnant woman while committing a home invasion with accomplices, Blackman says.

He admits "some people are going to be pissed off at me" for his comments, but "we shouldn't stand for this ... he is not a hero. He had a criminal background, he had criminal intent."

Blackman has at times been a champion of criminal-justice reform in the Legislature. Last year, he introduced a bill, unsuccessful in the end, that would have been among the most significant reforms in 25 years. He drew criticism from reform groups last year, though, when he voted for a bill that gave people a five-year sentence for possessing illegally even a small amount of fentanyl.

Local civil-rights activist Reverend Jarrett Maupin, one of the organizers of protests in the Phoenix area, notes that even Rush Limbaugh called Floyd "the essence of innocence" recently while on the syndicated radio show The Breakfast Club.

“How a Black person can be so indoctrinated as to have more disdain for the mainstream Black community than Rush Limbaugh is a mystery to me," Maupin said in an email. "By rejecting the inherent worth and dignity of George Floyd and of fellow Blacks, by refusing to deal with systemic and institutional racism ... Walter Blackman and his ilk have, in all practicality, volunteered to put their proverbial knees on the proverbial necks of all Black people. That, is what is most frightening of all.”

Blackman didn't respond to a request for comment. A representative of Black Lives Matter Phoenix Metro said someone would call back with a response to Blackman's statements. Phoenix New Times will update this article if they respond.

(Update: The American Friends Service Committee-Arizona, a prisoner advocacy group that has worked with Blackman in the past on sentencing-reform legislation, released a statement that included a vow to halt its work with him: "Mr. Blackman’s choice to focus on Mr. Floyd’s substance use and conviction history served to dehumanize Mr. Floyd and validate police violence... AFSC-AZ will not work alongside partners who are not aligned with our values and commitment to uphold the worth and dignity of all people, regardless of who they are or what they have done.")
KEEP PHOENIX NEW TIMES FREE... Since we started Phoenix New Times, it has been defined as the free, independent voice of Phoenix, and we'd like to keep it that way. With local media under siege, it's more important than ever for us to rally support behind funding our local journalism. You can help by participating in our "I Support" program, allowing us to keep offering readers access to our incisive coverage of local news, food and culture with no paywalls.
Make a one-time donation today for as little as $1.