A new lawsuit will force the Arizona Supreme Court to decide if early voting is unconstitutional in the Grand Canyon State. Lynn Trimble

Arizona Republicans are trying in the legislature and the courts to end the long-established and wildly popular tradition of early voting.

The Arizona Republican Party wants to nix the method that voters in the state have used to cast ballots for the past 30 years.


Arizona is among the most competitive battleground states in the nation and midterm elections are rapidly approaching.

Arizona voters rely on early mail-in voting more than every other state. In the last election, 89 percent voted by mail, four times as often as the national average.


Yvonne Cahill is the elected secretary of the Republican Party of Arizona and is named in the lawsuit filed late last week.


Cahill is a luxury real estate agent in Scottsdale, according to her LinkedIn profile. But in court, she's an Arizona voter and taxpayer representing the Republican Party.

Critics claim that Republicans are throwing up yet another roadblock for voters under the guise of security issues when no security breaches have happened. A string of recounts, audits, certifications, and legal challenges all upheld the integrity of the 2020 presidential ballot.

Still, the GOP is calling out early voting as a problem.


“In-person voting at the polls on a fixed date is the only constitutionally permissible manner of voting,” wrote Alexander Kolodin, attorney for Phoenix-based Davillier Law Group LLC,  which represents the Arizona Republican Party in the lawsuit.


If the petition is successful, the state would be barred from allowing mail-in and drop-box voting in future elections, including Arizona’s primaries on August 2 and midterms on November 8.

Critics claim the legal challenge is merely a political ploy to tarnish the reputation of Arizona's Democratic Secretary of State Katie Hobbs, who is running for governor.

They accuse the Republicans of trying to mislead voters by suggesting that she is flaunting state law.

“Secretary Hobbs has taken this unconstitutional act and run with it,” Kolodin said in an email to Phoenix New Times.


The Arizona Constitution awards all voters the right to “secrecy in voting,” which Kolodin argues is negated when ballots are completed off-site and subject to coercion out of the view of supervisory election officials.

The nascent lawsuit begs the question of why GOP leaders are defying the whims of their constituents, critics suggest.


At least half of Arizona Republicans vote by mail.

Terán also serves as the chairwoman of the Arizona Democratic Party.

"Any attempt to get rid of the early voting system is motivated by the extremists taking over the Republican Party," she said. "The lawsuit shows just how desperate they are to make it harder for people to vote."

Arizona voters cast ballots by mail four times the national average in lieu of a voting booth, according to the Pew Research Center.


Even though Republicans widely avail themselves of voting by mail, it's not in their best interest, some GOP leaders argue.


“The debate over the integrity of our elections has been divisive because it has been led by politicians,” said Joanna Duka, a Phoenix-based Republican political strategist. “Early voting is popular but ultimately, voters care more about security than convenience.”


Hobbs has been an outspoken advocate for mail-in and early voting since taking office in 2019 and is expected to file the state's defense with the Arizona Supreme Court by March 11.


The case will continue without oral argument, according to Supreme Court records. All seven justices on Arizona's high court were appointed by Republican governors. 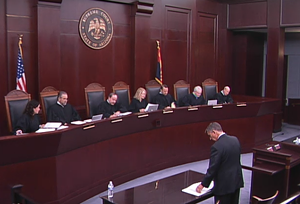 “This lawsuit has a single aim — to make it more difficult to vote,” said Hobbs in a statement. “I look forward to once again defending the voters of Arizona and defeating this ridiculous attempt to undermine our elections.”

The Arizona Republican Party cites a 2005 Commission on Federal Election Reform report in justifying the lawsuit. The report's authors argued that voter confidence in the election system was lower than ever and that reforming voter identification rules would help.

Co-chairs of that commission were former President Jimmy Carter and former U.S. Secretary of State James A. Baker III. During their tenure, the duo claimed that “absentee ballots remain the largest source of potential voter fraud," citing the notorious case of absentee ballot fraud during the 1998 mayoral race in Miami. But the commission differed over how often voter fraud actually happens.

The federal commission's report was published under the pretense that it would strengthen American voters’ faith in the electoral process. Instead, it has resurfaced since 2020 as right-wing ammunition against progressive voting legislation.

Arizona's recent GOP lawsuit comes in the wake of Trump echoing his legal team’s argument that this state was among a handful that had “gutted the safeguards for absentee ballots through non-legislative actions,” his lawyers said in court.


State Republican leaders are bulldozing the majority of conservative voters in favor of Trump’s oft regurgitated and meritless political rhetoric at the end of the 2020 campaign trail that the early voting process in Arizona is corrupt.


Absentee voting for any reason has been permissible in Arizona since 1991. It has become a tradition for many Republican voters who could see their party further splintered by a full-stop repeal of early voting.


For that reason, Republicans in the legislature are banking on HB 2025, the Arizonans for Voter ID Act, which would, in 2022, ask voters' permission to require that they provide ID with their future absentee ballots.

Unlike typical legislation, Governor Doug Ducey won't have veto power. Instead, the bill was approved by a Republican majority as a measure on the November ballot for voters to decide.


If approved by voters, the measure would require early voters to provide their date of birth and either a social security number or Arizona driver's license along with their mail-in ballots, starting in 2024.


Arizona GOP Chairwoman Kelli Ward has been on the frontline, alongside Trump, promoting the conspiracy theory that absentee ballots helped steal the election from him in states like Arizona. She implored voters to support the Voter ID Act this fall.


But the Republican Party wants more than to move the legislative needle. It wants to see a change in the Arizona Constitution solidifying more restrictive voter rules.

Arizona isn't the only state considering such changes.

It's been just shy of three years since Pennsylvania changed its voting rules. In January, a state court ruled to amend its constitution to no longer allow early voting without a legitimate excuse. That outcome bodes well for Republicans pushing for changes who argue that the state's original plan to allow early voting without restrictions was a bad idea and didn't follow the right process.

“Many states with similar provisions have amended their constitutions to allow for mail-in voting,” said Kolodin, the GOP attorney. “Arizona’s politicians gave us an insecure system of no-excuse mail-in voting without taking this necessary step.”


Unlike Pennsylvania, however, early voting is a time-honored tradition in Arizona.

Absentee voting without reason may increase voter turnout among historically marginalized demographic groups and lessens the stress of finding time to visit the polls on what is a busy workday for most voters. It also reduces wait times at the polls and allows for the timely correction of errors in ballots that would otherwise be scrapped.

According to Monica Robinson, a spokesperson for the Democratic Congressional Campaign Committee, the recent lawsuit is the Arizona Republican Party's "latest attempt to silence the will of the people."
KEEP PHOENIX NEW TIMES FREE... Since we started Phoenix New Times, it has been defined as the free, independent voice of Phoenix, and we'd like to keep it that way. With local media under siege, it's more important than ever for us to rally support behind funding our local journalism. You can help by participating in our "I Support" program, allowing us to keep offering readers access to our incisive coverage of local news, food and culture with no paywalls.
Make a one-time donation today for as little as $1.
Elias Weiss is a staff writer at the Phoenix New Times. A native of Charlotte, North Carolina, he reported first for the Northwest Arkansas Democrat-Gazette and was editor of the Chatham Star-Tribune in Southern Virginia, where he covered politics and law. In 2020, the Virginia Press Association awarded him first place in the categories of Government Writing and Breaking News Writing for non-daily newspapers statewide.
Contact: Elias Weiss
Follow:
Twitter: @ecweiss