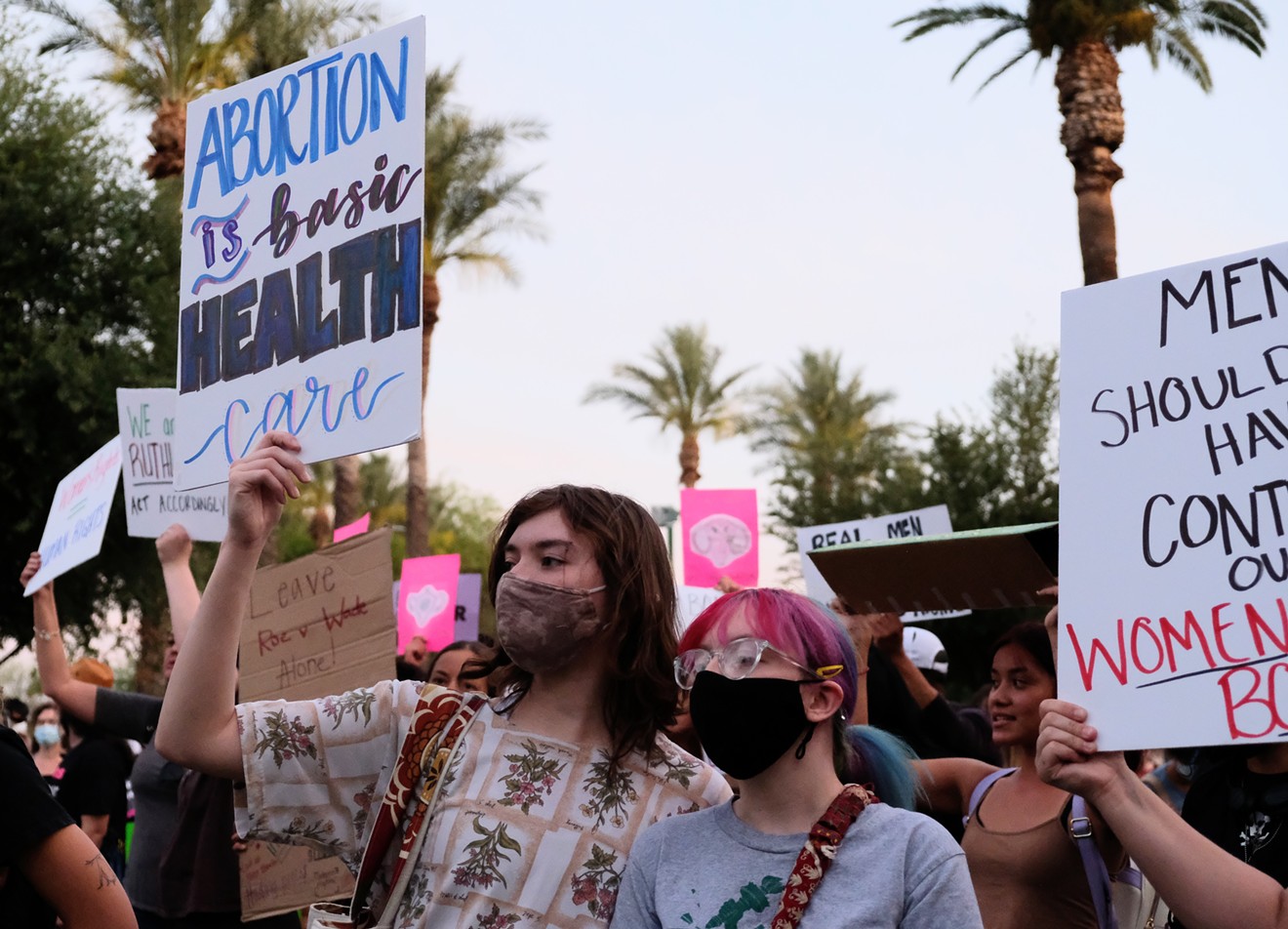 Hundreds of protesters rallied at the Arizona Capitol in protest of a draft ruling indicating the U.S. Supreme Court will soon overturn Roe v. Wade. Katya Schwenk
Hundreds gathered on the lawns of the state capitol in Phoenix on Tuesday at sunset, carrying bullhorns, banners, and pink signs. "We won't go back," the protesters chanted. "We won't go back!"

The protest was in response to a leaked draft of a U.S. Supreme Court ruling, which indicated that the high court plans to overturn Roe v. Wade, the landmark abortion rights case. The news site Politico published the draft on Monday night. By Tuesday, protests had cropped up around the country, opposing the decision.

In Phoenix, protesters gathered at the capitol, then took to the streets, marching down 17th Avenue and back around to the statehouse. Horns blared from passing cars in support.

The event appears to have been initiated by the Phoenix branch of a group called Radical Women Phoenix, a socialist feminist organization. On Monday, a widely shared Instagram post by Radical Women called on supporters to "fill the streets."

"If they leaked that draft decision to see what we think, let's show 'em!" the post read.

The event caught on, though, and protesters poured in from across Phoenix, many without ties to any particular group.
click to enlarge 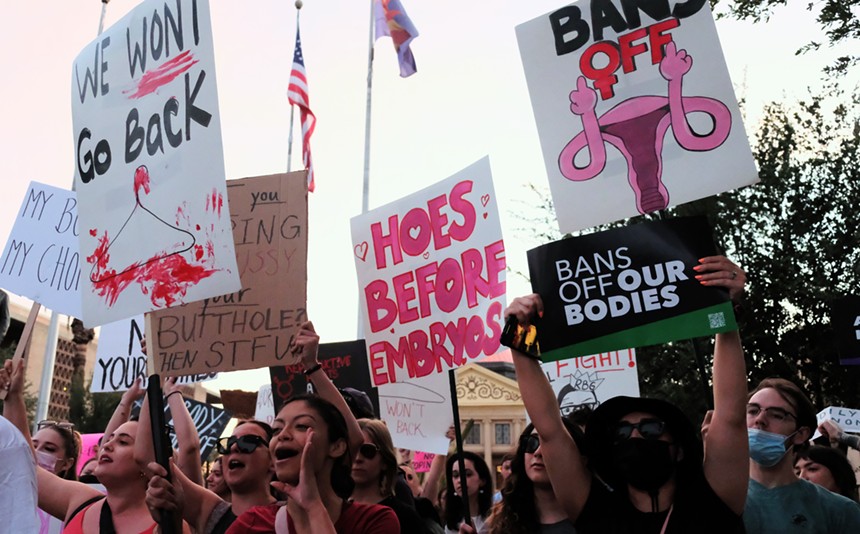 Hundreds of protesters rallied at the Arizona Capitol on Tuesday.
Katya Schwenk

"We want a choice," said Kiran Torres of Phoenix, who attended the protest. Without abortion rights, she said, she feared more women would be trapped in a "toxic cycle" of poverty, with poor access to contraception and neonatal care.

Torres said she was surprised to see such a turnout. A friend with her, Hilah Torres, said she had seen enough clamor on social media that she expected the crowds.

"It's empowering and enlightening to see so many people here united," Kiran Torres said. "I see unity."

It won't be clear whether Roe v. Wade will be overturned until the Supreme Court issues a final ruling. The expected outcome this summer would have significant consequences for Arizona.

Arizona already has anti-abortion laws on the books, some dating back more than a hundred years. With Roe in place, they cannot be enforced. If the ruling is overturned, however, the laws can take effect immediately, should prosecutors choose to act on them.

One of those laws mandates prison time — two years, minimum — for any person who helps a woman go through with an abortion. The only exception is if the procedure is necessary to save her life. It provides no leniency in cases of rape, incest, or other medical complications, nor if the woman is in the early stages of pregnancy.

On March 30, Governor Doug Ducey signed a 15-week abortion ban into law — similar to the Mississippi 15-week ban that triggered the current challenge to Roe v. Wade that the Supreme Court is deliberating.

That 15-week ban won't take effect for around three months after this year's legislative session comes to a close. By that time, the Supreme Court will have ruled on Dobbs v. Jackson Women's Health Organization, the case that could result in Roe being overturned.

The 15-week ban would allow physicians to face felony charges, and have their licenses revoked, for performing an abortion after 15 weeks of pregnancy, with some limited exceptions for emergency medical care. It does not allow women to be prosecuted for obtaining an abortion, which could occur in some other states if Roe were overturned.

The high stakes were palpable on Phoenix streets Tuesday night. As the night progressed, protesters concluded the march, gathering in a crowd before the capitol. "Hell no, Roe can't go!" they cried.

At one point, a small group of counterprotesters, carrying pro-life signs, blasted music through a bullhorn in an attempt to disrupt the rally, sparking a shouting match between the groups. The abortion rights protesters, however, far outnumbered the dozen or so who had shown up in opposition, and carried on.

Two people, one on each side of the issue, were arrested at the protest, police said. One person arrested, according to witness accounts, videos, and his own Telegram feed, was notorious anti-mask protester Ethan Schmidt. He claims this arrest was "for my own protection" during the conflict between the two crowds, though details of the arrests so far are unclear.

The Arizona Department of Public Safety confirmed the arrests to other media but did not respond to a request for further details from Phoenix New Times, including questions about why Schmidt was detained.

As the potential end of Roe grows nearer, the demonstrations are likely to continue. According to Radical Women's social media, the group expects further action soon.
click to enlarge

Hundreds of protesters rallied at the Arizona Capitol in protest of a draft ruling indicating the U.S. Supreme Court will soon overturn Roe v. Wade.
Katya Schwenk
KEEP PHOENIX NEW TIMES FREE... Since we started Phoenix New Times, it has been defined as the free, independent voice of Phoenix, and we'd like to keep it that way. With local media under siege, it's more important than ever for us to rally support behind funding our local journalism. You can help by participating in our "I Support" program, allowing us to keep offering readers access to our incisive coverage of local news, food and culture with no paywalls.
Make a one-time donation today for as little as $1.