Border Patrol Routinely Deports Migrants to Nogales, Mexico, in the Dead of Night 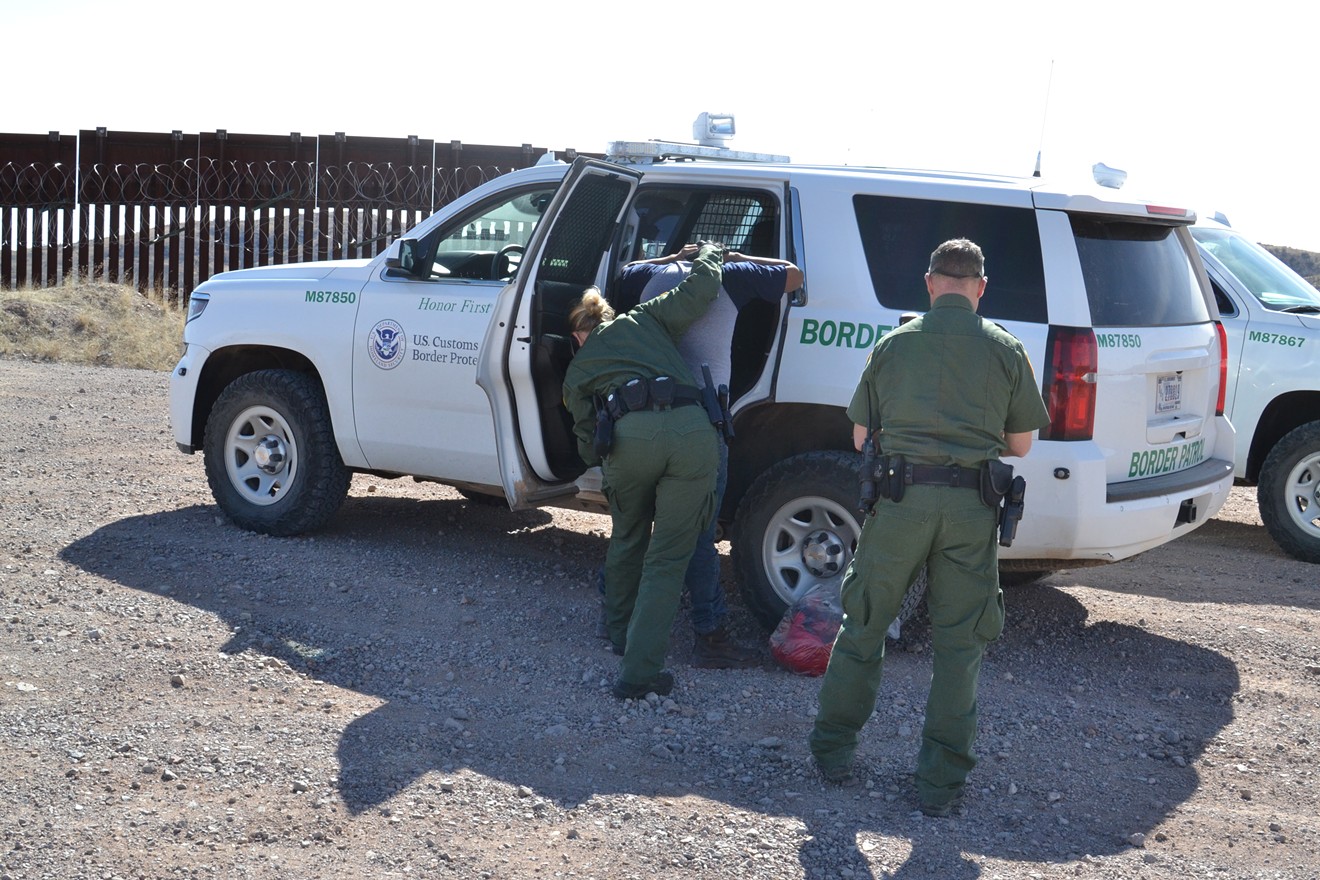 Border Patrol arrests a migrant who had jumped over the border fence near Nogales on February 12, 2019. Steven Hsieh
U.S. Customs and Border Protection officials frequently deport migrants to Nogales, Mexico, in the middle of the night — a practice that immigration advocates say endangers migrants and leaves them vulnerable to exploitation.

Sara Ritchie, a spokesperson with Kino Border Initiative, a binational humanitarian aid organization that provides services to migrants on the Arizona-Mexico border, said that groups of migrants are being expelled "every other day" during late-night hours at the same location near the Dennis DeConcini Port of Entry in downtown Nogales. The exact timing of the releases varies.

The deported immigrants become easy prey on the street for criminals and "bad actors" who wait for them in the dead of night, immigration advocates say.

"There are groups that linger in that specific area with the sole intent of either robbing and or taking advantage of those who are expelled," she said. "One group of 50 was expelled just the other week ... at 3:00 a.m. They had nowhere to go. You can't turn yourself into a shelter at that hour. They were taken to a hotel that was under construction, charged the same price [as for a] room, and kept where they keep the construction supplies."

"There are a lot of single mothers who are expelled in the middle of the night with children," Ritchie added. "No one should be expelled at night."

The practice of expelling migrants at night in Nogales has been occurring since former President Donald Trump instituted Title 42, the pandemic-era public health order that gave immigration officials broader latitude to deport migrants, Ritchie said. But the frequency of such expulsions has grown "exponentially" over the last six weeks, he said.

John Mennell, a spokesperson for U.S. Customs and Border Protection (CBP), said he would check and see if he could answer Phoenix New Times' questions regarding the issue, but had not as of the time of this writing.

Currently, CBP is expelling migrants around the clock at ports of entry along the Arizona-Mexico border. And while this isn't the first time that advocates have criticized U.S. immigration officials for deporting migrants in the middle of the night, the issue is occurring as the Biden administration confronts a mounting crisis at the southern border, including in Arizona.

CBP is reporting a spike in apprehended migrants in the Southwest, including increases in detained unaccompanied minors and adults along Arizona's border with Mexico. Biden recently ordered that the Federal Emergency Management Agency (FEMA) be deployed to provide services to minors crossing the border as existing detention centers fill up.

But even with the Biden administration's shift from Trump's hardline immigration policies — the U.S. is now admitting some asylum seekers and unaccompanied minors who cross the border — deportations are still happening, especially with Title 42 still in effect.

"We are on pace to encounter more individuals on the southwest border than we have in the last 20 years," Department of Homeland Security Secretary Alejandro Mayorkas said in a March 16 statement. "We are expelling most single adults and families. We are not expelling unaccompanied children."

A meeting between staff with the Kino Border Initiative and CBP officials recently took place regarding the Biden administration's continued expulsion of migrants, as well as CBP's practice of deporting migrants to Nogales at night. However, CBP offered no concessions.

"Unfortunately, we have not received any sort of indication of substantial change [or] willingness to cease to expel migrants at night," Ritchie said.
KEEP PHOENIX NEW TIMES FREE... Since we started Phoenix New Times, it has been defined as the free, independent voice of Phoenix, and we'd like to keep it that way. With local media under siege, it's more important than ever for us to rally support behind funding our local journalism. You can help by participating in our "I Support" program, allowing us to keep offering readers access to our incisive coverage of local news, food and culture with no paywalls.
Make a one-time donation today for as little as $1.