City to Pay $1.6 Million to Victim of Illegal Cavity Search by Phoenix Police 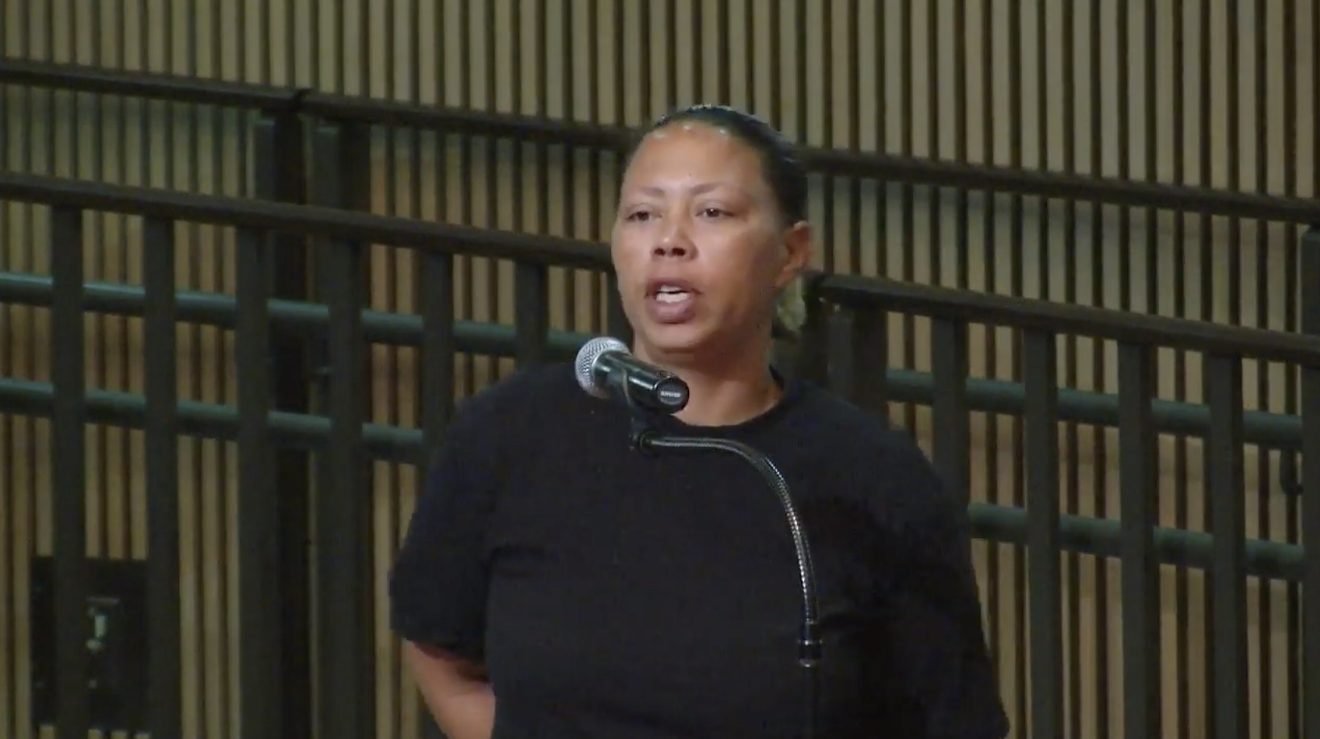 Erica Reynolds accused the Phoenix police of illegally probing her body. PHX TV
The Phoenix City Council voted to approve a $1.6 million settlement with a woman who reported that a Phoenix police officer subjected her to an unwarranted body cavity search.

The settlement passed the council 7-to-2, with council members Sal DiCiccio and Jim Waring voting no.

Erica Reynolds filed a notice of claim — a precursor to a lawsuit — in June alleging that Phoenix cops ordered her to strip naked in an interrogation room before Officer Timaree Murphy digitally probed her rectum and vagina in search of drugs. No drugs were found.

The procedure did not comply with the Phoenix Police Department's policy on strip searches, which states that cavity searches can only be conducted with a warrant under approval from a superior officer. The policy also requires a medical professional to conduct any cavity search. Murphy's search of Reynolds also violated national best practices on cavity searches.

Murphy was suspended by the Phoenix Police Department for 40 hours over the unwarranted search, a spokesperson confirmed. The Arizona Peace Officer Standards and Training Board, a state regulatory commission, in November retroactively suspended Murphy's police certification for 40 hours.

The settlement comes just before the six-month deadline for Reynolds to file a lawsuit against the city. The agreement is still pending City Council approval on Wednesday, a step that is largely a formality as Council members routinely vote in favor of settlements.

The unwarranted search of Reynolds happened about a year ago — the day after Christmas. Officers pulled Reynolds over on December 26, 2018, after surveilling a meeting she had with an alleged drug dealer.

Phoenix police claimed to smell marijuana in Reynolds' car and used that as a pretext to conduct a search. They found no drugs. A pat-down of Reynolds and a K-9 search also failed to yield any illegal substances.

"At this point, with Erica demonstrably not in possession of anything illegal, the Phoenix PD officers made a choice," Reynolds' legal team wrote in her notice of claim. "They did not end the search. They did not secure a search warrant. They did not release Erica."

Instead, the officers brought her to a substation and ordered her to strip naked. Officer Murphy donned a pair of gloves and began the unwarranted procedure.

"As the officer inserted multiple unlubricated fingers into Erica’s anus, probing her rectum, the tears flowed," the claim states. "And as the officers aggressively poked and prodded a hemorrhoid, Erica yelped in pain."

Without changing her gloves, Murphy then searched Reynolds' vagina. Neither search turned up evidence of drugs.

In addition to the unwarranted cavity search, Reynolds also alleged that Phoenix police arrested her again and coerced a confession out of her the day that she was planning on speaking publicly about the incident during a City Council meeting. Reynolds claimed that police interrogated her for six hours on February 6 until she admitted under duress to having possessed marijuana on the day she was searched in December.

Prosecutors have not charged Reynolds with any crimes stemming from her February 6 arrest.

Reynolds later claimed through a court filing that the Phoenix Police Department withheld information related to her case, including police reports, officer files, and video footage related to the warrantless search of her vagina and rectum.

Before voting against the settlement, Council member Sal DiCiccio called the agreement "morally wrong." DiCiccio noted that Reynolds has a criminal history, but did not mention that she has not been charged in relation to the unwarranted search.

"This City of Phoenix is doing something wrong, I agree, but this individual is getting $1.6 million of taxpayer money when we have police officers barely making it in the City of Phoenix," DiCiccio said.

Council member Carlos Garcia, who voted for the agreement, said he wants the city to takes steps to ensure that incidents like what happened to Reynolds do not happen again.

"I think what happened is egregious," he said. "It was against this person's constitutional rights. Regardless of her past, this person's life has been shifted for ever because of one of our employees."

12/18/2019, 4:50 p.m: This story was updated to reflect that the City Council approved the settlement.
KEEP PHOENIX NEW TIMES FREE... Since we started Phoenix New Times, it has been defined as the free, independent voice of Phoenix, and we'd like to keep it that way. With local media under siege, it's more important than ever for us to rally support behind funding our local journalism. You can help by participating in our "I Support" program, allowing us to keep offering readers access to our incisive coverage of local news, food and culture with no paywalls.
Make a one-time donation today for as little as $1.
Steven Hsieh was a staff writer for Phoenix New Times from August 2018 to April 2020.
Contact: Steven Hsieh
Follow:
Twitter: @stevenjhsieh