Why is a Symbol of Christian Nationalism Hanging in the Arizona House? 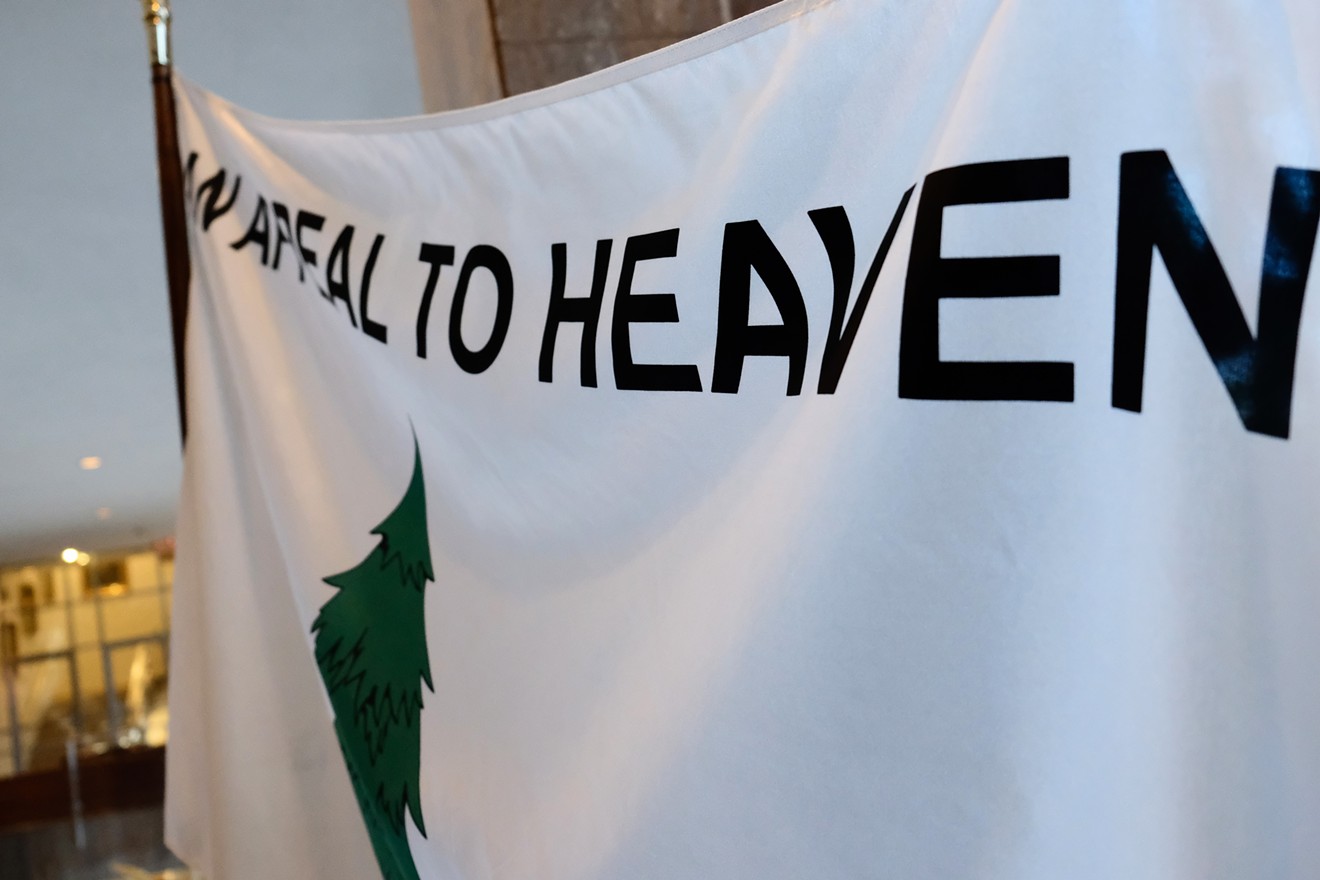 “An appeal to heaven,” it reads, in black text.

While the flag’s message is simple and meant for all to see, its origins in the Arizona House are a mystery.

Lately, the flag’s presence has raised some eyebrows in the legislature.

The “pine tree flag” is centuries old, once flown during the American Revolution and the early colonial days.

In recent years, though, the banner has been adopted by some evangelicals, becoming an emblem of far-right Christian nationalism. The pine tree flag appears at the January 6 protests at the U.S. Capitol in 2021.
Brett Davis

Its presence in the Arizona House “is a violation of church and state, obviously,” said Dianne Post, the legal director of the Secular Coalition for Arizona, which advocates for secular governance in the state. “It’s a Christian nationalist flag that was flown at the insurrection.”

Secular Arizona sparked a conversation about the flag in a blog post earlier this month, calling its display a “clear, unconstitutional endorsement of evangelical Christianity” and an “insult” to Arizonans of other faiths.

Post confirmed that the coalition sent a letter to the Republican Speaker of the House, Rusty Bowers, demanding the flag's removal and threatening legal action if it isn’t.

Bowers, who represents Legislative District 25 which includes the city of Mesa, did not return a call or email from Phoenix New Times about the flag. Nor did his spokesperson, Andrew Wilder, or a representative for the Arizona House Republican caucus.

Democratic Representative Sarah Liguori, a newcomer whose district includes north Phoenix and Paradise Valley, told New Times she had noticed the flag in the fall, after learning about it from a constituent months before.

“It was just very glaring to me,” Liguori said.

She was struck by its use at the U.S. Capitol riots and its clear religious tone.

“Does it have a place in our political institution here, is my concern,” she said.

So far, her inquiries about the flag have not been returned.

It’s not yet entirely clear who put the flag there — or when. Post said the flag was brought to Secular Arizona’s attention earlier this month, at the beginning of the 2022 legislative session. The group had not been aware of its existence before.

Robbie Sherwood, communications director for the House Democrats, said that the flag had been brought to his attention around mid-December. Though he has worked in the building for years, he had not noticed it before — giving him the impression that it was a new decoration.

Even if the flag was recently put on display, however, it doesn’t appear to be the first time it has flown at the state capitol. A photo posted on Twitter back in 2017 shows a pine tree flag hanging in a different location at the Arizona House building.

Justin Riches, public records counsel for the House of Representatives, said that further documentation on the flag was not immediately available.

Battles over the pine tree flag’s display in public facilities are hardly new — or restricted to Arizona.

In Arkansas, back in 2015, a county judge took down an “Appeal to Heaven” flag from courthouse property after public pressure. State officials in Illinois drew some backlash for flying it over the state capitol in March 2019. The pine tree flag hanging in Arizona stands nearby the American flag and the Arizona state flag.
Katya Schwenk

The Tow Center for Digital Journalism at Columbia's Graduate School of Journalism argued in a report that the flag has slowly become an emblem of Christian nationalism — symbolizing “the fight to elevate the influence of biblical law in American society.”

Major right-wing figures, from previous Alaska Governor and once vice-presidential hopeful Sarah Palin to former President Donald Trump, have posed next to the pine tree symbol.

“They are invoking, as is typical of Christian nationalist thinking, God and the founding fathers in the same breath,” one researcher told the Mississippi Free Press this week, adding that the flag represented an implicit demand to “build a Christian nation.”

Post, the Secular Arizona attorney, warned Christian nationalism is a “political strategy of dominance and power.”

The flag’s public prominence implies an official endorsement of its message that Arizona should be a “Christian state.”

And that, she said, is unconstitutional.
KEEP PHOENIX NEW TIMES FREE... Since we started Phoenix New Times, it has been defined as the free, independent voice of Phoenix, and we'd like to keep it that way. With local media under siege, it's more important than ever for us to rally support behind funding our local journalism. You can help by participating in our "I Support" program, allowing us to keep offering readers access to our incisive coverage of local news, food and culture with no paywalls.
Make a one-time donation today for as little as $1.