Sure, President Trump Has 'Big Heart' (and Hands), But Can He Pass Citizenship Test? 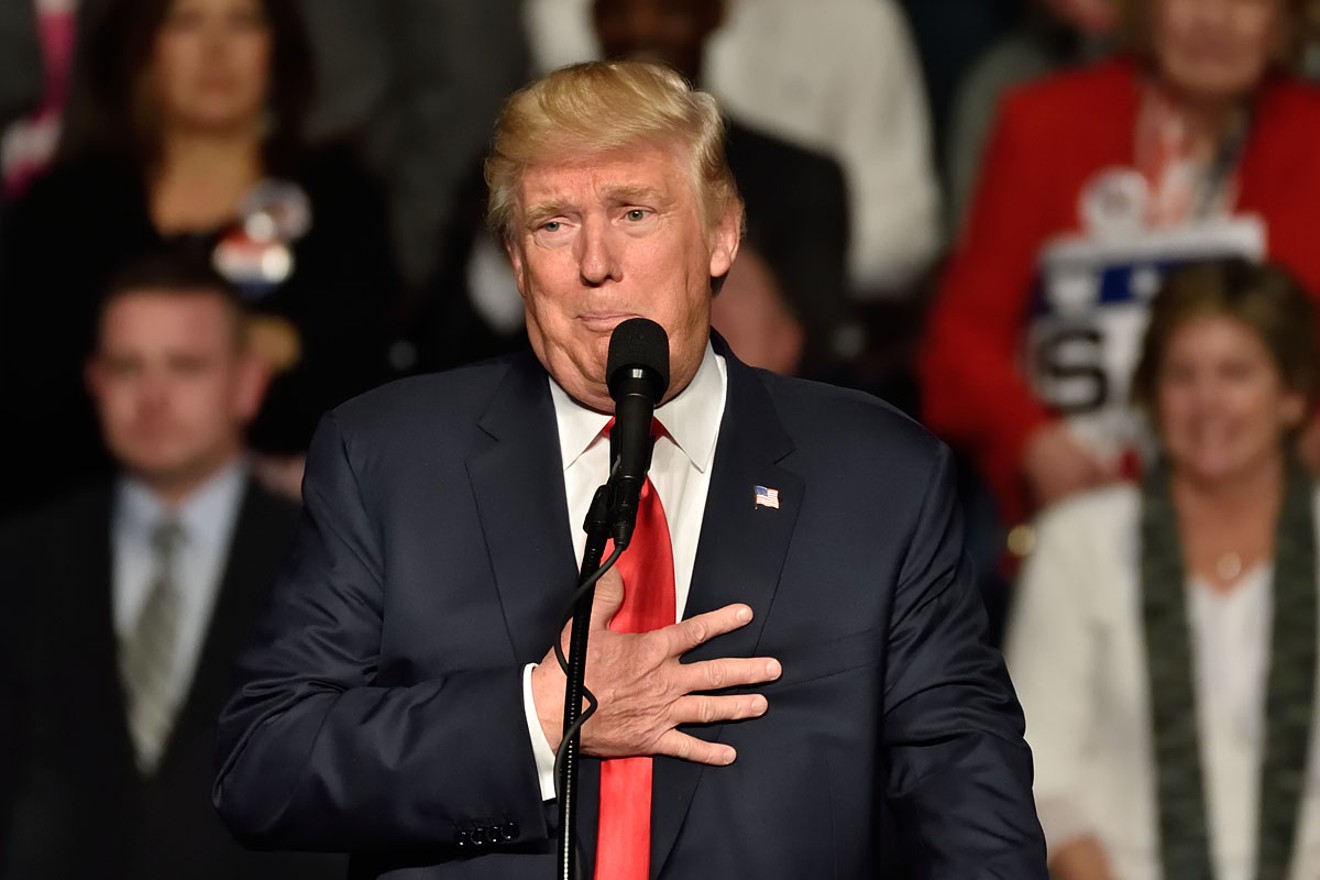 "Can I have a pledge? ... I do solemnly swear that I ... will vote for Donald J. Trump." Evan El-Amin/Shutterstock.com

"Can I have a pledge? ... I do solemnly swear that I ... will vote for Donald J. Trump."
Evan El-Amin/Shutterstock.com
I’m afraid I wouldn’t qualify for, as a friend calls it, the Trumpdontcare health plan.

I have a pre-existing condition: I’m a journalist with an attitude.

Nevertheless, I won’t persist. I’m not going to use my first column as editor of your Phoenix New Times to start a birther movement conspiracy, even though our 45th president’s mother was born in Scotland. Who would do a thing like that?

Yet Donald Trump does things every day that make you question his citizenship (or whether he just slept through history classes).

Like suggesting President Andrew Jackson and his “big heart” would have prevented the Civil War that began 16 years after he died. Yes, the same Andrew Jackson who marched 4,000 of my distant Cherokee relatives to their deaths so that slave owners and other good white folks could settle on 25 million acres of their land.

Or perhaps the Trail of Tears was just an exercise program gone wrong. Like the Republican health care plan.

President Trump also noted that abolitionist Frederick Douglass “is an example of somebody who’s done an amazing job and is getting recognized more and more, I notice.” I suppose Trump knows that Douglass died in 1895. Maybe that was just a verb tense problem. (Maybe he slept through English class, too.)

Makes me wonder, though, if Agent Orange could pass the basic civics portion of the naturalization test required by U.S. Citizenship and Immigration Services.

Here are some actual history and government questions from the quiz, paired with answers he’s given in public. (I’ve tried to keep his responses to 140 characters … a number the Commander in Tweet seems to favor.)

What does the Constitution do?
“It’s a very rough system. It’s an archaic system ... It’s really a bad thing for the country.”

The idea of self-government is in the first three words of the Constitution. What are these words?
Uh, “Lock her up” … no, uh, “Put America first” … oh, I got it … “Make America great.”

What is freedom of religion?
“We will not allow people of faith to be targeted, bullied, or silenced anymore.” (And that would include Muslims?)

What is the “rule of law?”
“We are going to restore the rule of law” unless a judge “of Mexican heritage” has “an absolute conflict” in ruling against Trump University. “I’m building a wall. It’s an inherent conflict of interest.”

Who is the commander in chief of the military?
“Do I have to answer that? … I know more about ISIS than the generals. Believe me.”

What’s the highest court in the United States?
Must be the Ninth Circuit. Sad. They’re smoking something funny out there in San Francisco. (Okay, I made that one up … sort of.)

What is the name of the Speaker of the House of Representatives now?
“Our very weak and ineffective leader.” (We’ll assume he’s talking about Paul Ryan, so count that as a correct answer.)

What do we show loyalty to when we say the Pledge of Allegiance?
“Can I have a pledge? Raise your right hand. I do solemnly swear that I ... will vote for Donald J. Trump for president.”

When is the last day you can send in federal income tax forms?
“I did what was an almost an impossible thing to do for a Republican — easily won the Electoral College! Now tax returns are brought up again?” Not paying taxes “makes me smart.”

Name one problem that led to the Civil War.
“People don’t ask that question, but why was there a Civil War? Why could that one not have been worked out?” (Ah, yes, that slavery thing was such a simple matter to resolve.)

What was one important thing that Abraham Lincoln did?
“He was a Republican. A lot of people don't know that.”

During the Cold War, what was the main concern of the United States?
“I have nothing to do with Russia. Haven’t made a phone call to Russia in years. Don’t speak to people from Russia.”

What did Martin Luther King Jr. do?
Since they call him Dr. King, he must have a Ph.D, and “if I were starting off today, I would love to be a well-educated black because I believe they have an actual advantage.”

Name one state that borders Canada.
“Canada has made business for our dairy farmers in Wisconsin and other border states very difficult.” (Uh, Wisconsin isn’t a border state. Also, I can hardly resist including the popular but fake @realDonaldTrump tweet here: “Giving Canada independence was one of the biggest mistakes America ever made. If elected, I promise to #MakeCanadaGreatAgain.”)

Name one state that borders Mexico?
We have a border with Mexico? I didn’t know that. (All right, he got bored and left to play golf before he got to the final question; I answered it for him.)

So how do you think he did?

I’m going to give him a barely passing grade. A “D” for Donald.

I guess that makes him Citizen Trump.