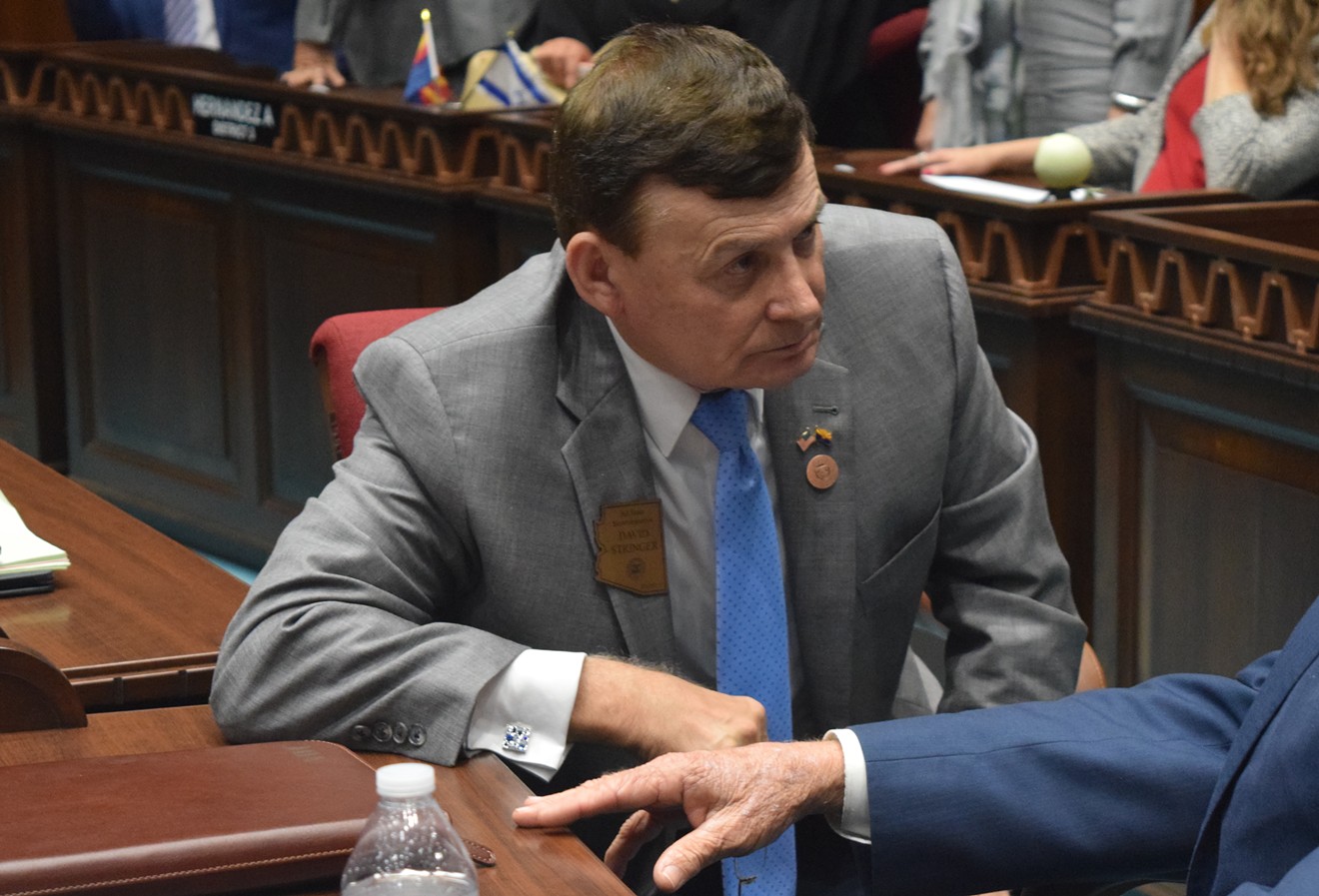 Stringer — a Republican lawmaker from Prescott who's been under fire in recent months for making racist statements — was indicted on five sex offenses on October 10, 1983, according to a microfilm copy of his case history obtained by Phoenix New Times from the Circuit Court for Baltimore City.

That record appears to show a Maryland court entered a judgment of guilt for Stringer on three sex offenses. The case history also shows that he was sentenced to five years of probation in the case, and was ordered to seek treatment at a well-known clinic for people with sexual disorders.

(See below: A copy of Stringer's 1983 criminal case history. New Times redacted the names of victims and witnesses, along with information from unrelated cases.)

Stringer didn't respond to multiple phone calls and emails seeking comment. He declined to comment when approached in person on the House floor.

Details of Stringer’s charges are hard to come by. That’s by design.

Stringer’s case record was expunged by the Maryland Judiciary in 1990, according to Detective Jeremy Silbert of the Baltimore Police Department.

Nadine Maeser, a spokesperson for the Maryland Judiciary, said the microfilm of Stringer’s case history was provided to New Times in error.

"Because the law prohibits reviewing and disclosing information from an expunged record, you are instructed to destroy or return these records immediately,” Maeser wrote in a letter after New Times sought clarification about Stringer’s case history.

"New Times lawfully obtained documents involving criminal charges against a controversial Arizona legislator,” said New Times Editor Stuart Warner. "It is not only our right to publish them, it is our duty.”

Maryland’s expungement law allows criminal defendants to erase police and court records under special circumstances. Situations eligible for expungement in Maryland include acquittal, probation before judgment, and legal compromise. The legal basis Stringer relied on for the court to expunge his case is unknown.

As a result of the expungement, the Maryland State Attorney’s Office declined to comment on Stringer’s case.

“It wipes their record clean,” said Melba Saunders, a spokesperson for the Maryland State Attorney’s Office. “Legally, we can’t talk about what happened.”

Without more case documents (such as a police report or criminal complaint) or an admission from someone with knowledge of Stringer’s case, it’s impossible to describe the details of Stringer’s charges in the mid-'80s.

The case history appears to show the court entered a judgment of guilt for Stringer on some combination of the “SEX02” and “SEX04” charges. The document also indicates he was sentenced to five years of probation in the case.

For the two charges listed as “other” on Stringer’s case history, a note says, “Charge is child pornography.” Neither of the apparent child pornography cases lists a disposition, meaning it’s unclear how the court decided, or whether the court made a judgment on those specific charges.

In 1983, Maryland’s criminal code on child pornography said: “Every person who solicits, causes, induces, or knowingly permits a person under 16 years of age to engage as a subject in the production of obscene matter is subject to” a fine of up to $15,000, up to 10 years in prison, or both.

Berlin’s online biography says he founded the university’s Sexual Disorders Clinic, where he “specializes in the evaluation and treatment of patients with sexual disorders, such as pedophilia, voyeurism, and exhibitionism.”

Berlin’s program became known for administering Depo-Provera, a testosterone-suppressing contraceptive that has also been used to reduce sexual urges in men convicted of sex crimes. Along with sexologist John Money, Berlin experimented with the drug on sex offenders.

“Beginning in the early 1980s, hundreds of Maryland sex offenders were offered probation if they agreed to be injected with the drug under the supervision of Money and Berlin,” according to a profile of Berlin published in February by the Chronicle of Higher Education. Berlin confirmed in an email that he accepted clients who agreed to probation for sex offenses.

The case history also indicates that a condition of Stringer’s probation “is to perform two hundred eight (208) hours of community service per year."

It’s unclear whether Stringer was admitted to Berlin’s program or completed the community service he was ordered to perform.

The same year he was arrested, Stringer worked at the Bureau of Alcohol, Tobacco, and Firearms (ATF) in Washington D.C., agency spokesperson April Langwell confirmed. She said Stringer served at ATF as a position classification specialist in the human resources division.

Following his time at ATF, Stringer worked as a criminal defense attorney and real estate lawyer in Maryland for several years before settling down in Arizona. He obtained his law degree in 1978 from the University of Baltimore School of Law, a spokesperson for the law school confirmed.

Stringer first won his District 1 seat, representing a large swath of Yavapai County and a small part of northern Maricopa County, in 2016.

He attracted national controversy in June 2018 when video of him emerged calling immigration an “existential threat” to the United States, and lamenting that there “aren’t enough white kids to go around” in Arizona public schools.

Stringer’s comments on immigration and integration led to calls for his resignation from Governor Doug Ducey, Arizona Republican Party Chairman Jonathan Lines, and others.

Despite the comments, voters overwhelmingly re-elected Stringer to a second term in November.

Stringer faced controversy again following his re-election after New Times published an audio recording of him telling Arizona State University students that African-Americans “don’t blend in,” in addition to making other racist remarks. The audio prompted another round of condemnations of Stringer. He apologized for the statements on the House floor Thursday.

Arizona bar applicants are expected to disclose an expunged record during a portion of the bar application for evaluating a would-be lawyer's “fitness and character,” said Aaron Nash, a spokesperson for the Arizona Supreme Court, which oversees bar admittance.

“There is a presumption that conviction of a misdemeanor involving a serious crime or any felony will prevent admission,” Nash said.

It’s unknown whether Stringer disclosed his Maryland criminal case to the bar before his admission. He has been an active member of the Arizona Bar Association since January 6, 2004, according to online records.

Since publication of this story, New Times has learned that David Stringer spoke to the Arizona Daily Independent, a conservative website, about this case.

In a story bearing the sympathetic headline "David Stringer's False Arrest Drives Empathy for Those Trapped in Unjust System," the Daily Independent quoted Stringer as professing his innocence, although he admitted to accepting probation on two unspecified misdemeanors. The Daily Independent story carries a January 16 publication date. New Times approached Stringer with questions in person on January 15 after repeatedly attempting to contact him via phone and email.

The Daily Independent reported that Stringer was "accused of possession of pornography and patronizing prostitutes." Without making mention of child pornography, the piece claims police did not find pornography in Stringer's home and that "those charges" were later dropped.

The Daily Independent piece claims without evidence that prosecutors offered leniency to two prostitutes in exchange for names of clients and that one of the prostitutes named Stringer. Stringer told the website that he accepted a plea deal wherein he would be sentenced to "probation before judgment" on two misdemeanors, allowing him to maintain a not-guilty plea and have his record expunged after the probationary period.

Ms. Hunnicutt this month accepted a temporary job working for Pima County Supervisor Ally Miller, a Republican who, like Stringer, has sparked controversy with comments on racial matters. In 2017, the Arizona Republic reported that Miller drew fire for a Facebook post she wrote after President Donald Trump condemned "hate" and "violence" in Charlottesville, Virginia. "I'm sick and tired of being hit for being white," Miller wrote. "It is all about making us feel like we need to apologize."

KEEP PHOENIX NEW TIMES FREE... Since we started Phoenix New Times, it has been defined as the free, independent voice of Phoenix, and we'd like to keep it that way. With local media under siege, it's more important than ever for us to rally support behind funding our local journalism. You can help by participating in our "I Support" program, allowing us to keep offering readers access to our incisive coverage of local news, food and culture with no paywalls.
Make a one-time donation today for as little as $1.
Steven Hsieh was a staff writer for Phoenix New Times from August 2018 to April 2020.
Contact: Steven Hsieh
Follow:
Twitter: @stevenjhsieh