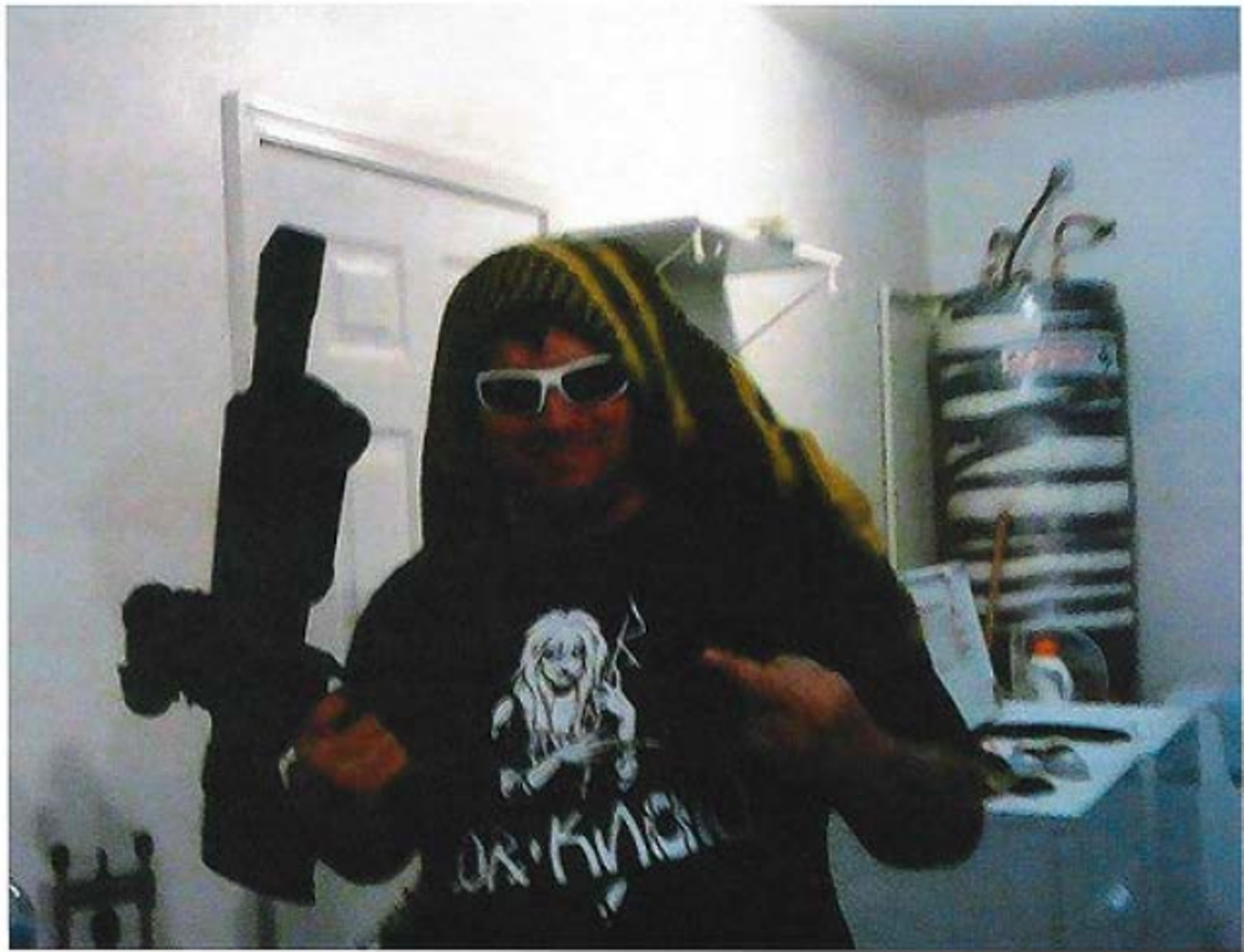 Wells holds a long gun in a photo posted on Facebook. Exhibits from court filings in the case against Wells

A subpoena to Facebook ended with FBI agents raiding the home of one Arizona man who had bragged online about his cache of guns and ammunition, and allegedly described himself as a "skinhead Neo-Nazi 'liberal killer,'" according to the feds.

Phoenix New Times learned of the enforcement action against Timothy Jason Wells after the Arizona U.S. Attorney's Office filed a motion earlier this year to acquire the firearms and ammunition involved in Wells' arrest.

Wells is now serving a three-year sentence in federal prison for unlawfully possessing firearms after agents seized 22 firearms and 22,000 rounds of ammunition from his home in Kingman.

The July 18, 2017, raid came after agents got wind of Wells' Facebook posts. Though it's unclear from court filings how they became aware of it, records indicate the social media giant turned over Wells' private messages as well as his post and comment history.

Wells, 49, previously had been convicted of three counts of unlawful intercourse with a minor three or more years younger in 2004, when he was 34 years old and his victim was either 16 or 17, stripping him of his right to own a firearm.

Feds say Wells shared photos of himself posing with guns, and made comments expressing his hatred for liberals and a desire to kill people. In their February 20 motion, prosecutors wrote that "Wells described himself in his posts as a skinhead, Neo-Nazi, 'liberal killer,' and a member of the South Bay Skinheads."

Wells' case shows just how much access federal investigators have to citizens' private social media messages, and highlights one way FBI agents go after gun owners with felony convictions — and the harsh sentences they face when caught.

To Wells and his public defender, his arrest also raises questions about what you can and cannot say online. His public defender accused the government of "gratuitously including a photograph of political bumper stickers from Mr. Wells' house" in court filings and of urging the court to sentence Wells based on "the hate that he holds toward some groups."

Guns seized by the government
Exhibits from court filings in the case against Wells
Federal agents served Facebook with a search warrant for Wells' account, which they said showed that starting in September 2016, Wells "began making frequent comments via Facebook regarding his personally owned firearms, the purchase and manufacture of firearms for his personal use, and shared pictures of what he claims are actual functioning firearms."

On September 7, 2016, Wells shared a photo of himself "holding a black long-gun," feds say, and giving the middle finger. The caption read: "PISSIN THE WORLD OFF ONE PERSON AT A TIME."

FBI agents were even able to read Wells' private messages with other Facebook users, where he talked about his family and his guns.

"I kicked the shit out of a white n——- at the Circle K a couple of weeks ago ... when his friends came out of the car I drew my glock 45 and said I like killing n———," Wells allegedly said in a private message on December 1, 2016.

On November 11, 2016, Wells wrote "and people like me are going to kill them and the law enforcement that did not do there job [sic], revolution the only solution, I will kill every American dirtbag I encounter, I have been waiting for the day to use my stockpile up, every real American better get off there [sic] asses and get ready, slackers will be shot on contact, fuck you if you do not think I'm telling the truth, you have all been warned, ! Now go fuck yourself you traider [sic] ass liberals."

Handgun seized at Wells' residence
Exhibits from court filings in the case against Wells
On August 16, 2017, Wells was indicted for illegally possessing firearms and ammunition after being convicted of a crime punishable by more than one year in prison. (Wells did not spend one year in prison for his previous crime, however. He was initially sentenced to probation, but then violated the terms of his probation on two occasions, at least once by contacting the victim, and ended up spending 120 days in jail). FBI agents said they found spent shell casings outside of Wells' home.

On July 31, 2018, more than one year after the raid, Wells pleaded guilty to committing a class C felony. The plea deal also required him to waive his right to appeal and consent to forfeiting the weapons seized in the case to the government.

At the sentencing hearing in November 2018, Wells' public defender, Benjamin Good, said Wells thought that he had a misdemeanor conviction, not a felony, at the time he made the posts.

His 2004 crime was what is considered a "wobbler offense" in California, meaning it could be charged as either a felony or a misdemeanor; Wells told the court he believed his lawyer had brought the charge down to a misdemeanor. Good argued that because Wells was ultimately sentenced to 120 days in county jail, his crime was charged as a misdemeanor, not a felony. But the judge didn't buy it.

At the sentencing hearing in November 2018, Good pleaded with the judge to consider the effect Wells' incarceration would have on the defendant's daughter, the fact that he believed he had a right to own a gun at the time he made the posts, and that Wells has been diagnosed with schizophrenia and paranoia. Good asked the judge to give Wells time served for the 16-plus months he has already spent behind bars.

Ammunition
Exhibits from court filings in the case against Wells
U.S. Attorney Lisa Jennis argued against it, stating that Wells was a "dangerous guy" who knew or should have known he still had a felony conviction.

"The United States acknowledges the defendant clearly has had a hard life," said Jennis. "We know that he has a family and some obvious mental health issues, but you know, as for his young child, that doesn't really make him not similarly situated to many defendants that come before your honor."

In the end, Judge Douglas Rayes sentenced Wells to 37 months in federal prison and 36 months of supervised release. But his sentence includes far more than three years in prison and three years on probation.

Once out, if Wells fails to show that he has a full-time job or is actively searching for one, he may be required to complete 20 hours of community service per week until he does. He must allow himself and everything he owns to be searched by his probation officer and "cooperate in the collection of DNA as directed by the probation officer." He will need to participate in a mental health assessment, then follow the directed treatment, which could include taking medication.

He can't possess or drink alcohol during that time, and he must reside and participate in a residential re-entry center for up to 180 days. He must get substance abuse treatment, which he will have to pay for. Even if Wells were to be prescribed medical marijuana, he would not be allowed to use it. If he violates any of these conditions upon his release, a warrant will be issued for his arrest.

His public defender asked the judge to recommend Wells be incarcerated somewhere nearby, since Wells' family still lived in Kingman. The judge said he would. But Wells is currently incarcerated 1,842 miles away in Lexington, Kentucky. His wife and daughter have since moved across the country, to Tennessee, where they are about four hours away.

Spent casings near Wells' house
Exhibits from court filings in the case against Wells
The collection of guns and ammunition seized by the government in Wells' case includes: