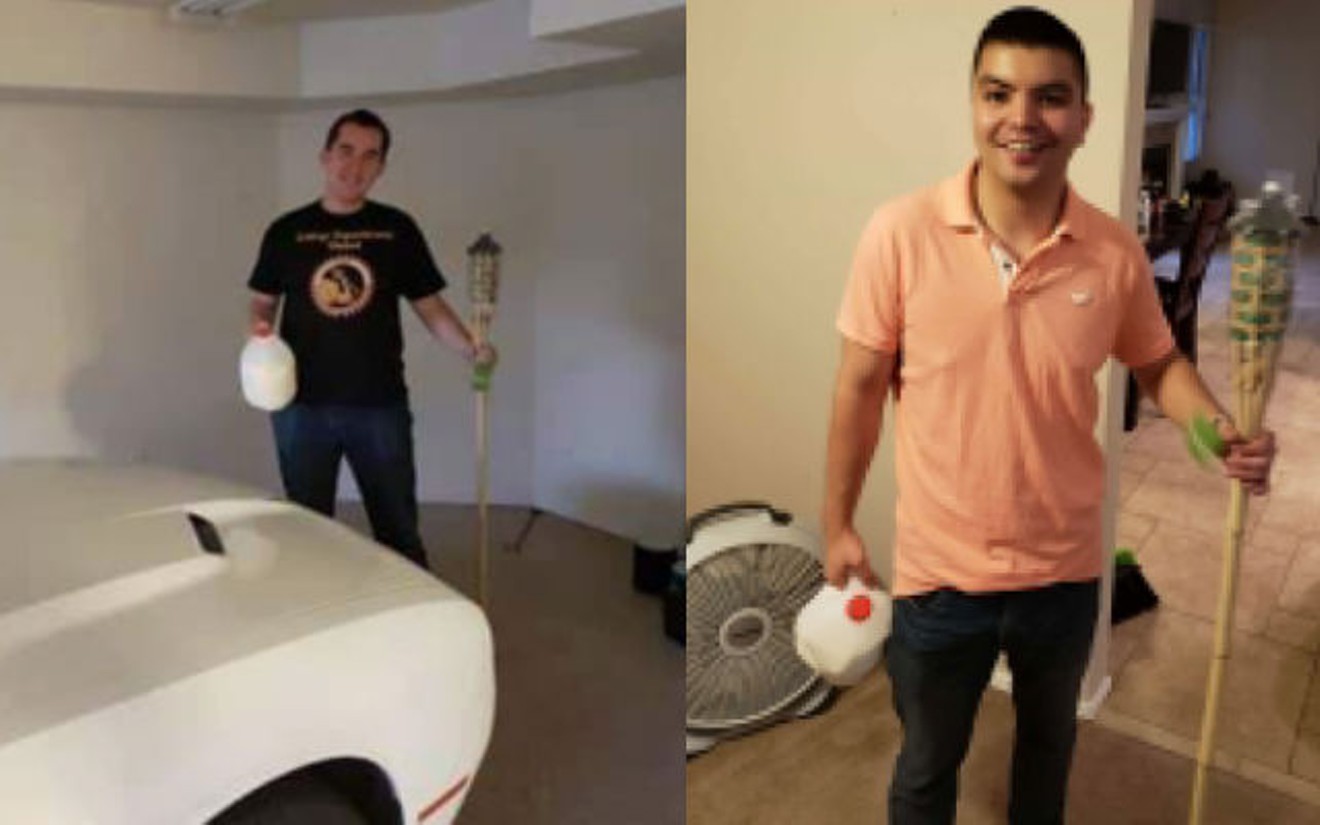 Leaders of a conservative student club at Arizona State University used anti-Semitic symbols, made racist and homophobic comments, and appeared to advocate for eugenics, according to a dossier compiled this winter by former club members leaked to Phoenix New Times.

Members of CRU are active in the Arizona Republican Party, having supported Kelli Ward in her successful bid to become the state GOP's chairperson and canvassed for former state representative Maria Syms.

The group's founder, ASU senior Richard Thomas, has already come under criticism for social media posts saying transgender people have mental illness and that Muslims should be deported, among other offensive comments.

Those posts were public. He expresses even more explicitly offensive views in private, according to photos and Facebook Messenger screenshots leaked to New Times. In a statement published on its website prior to the publication of this story, CRU confirmed that its members were involved in some of the chats and photos leaked to New Times.

"College Republicans United should be judged on the public work we have done, judge us on our accomplishments and failures," the statement read. "Don’t judge us based on private conversations that were said to former members who had the ill intentions of using blackmail on club members."

Thomas appeared in photos, along with a CRU executive board member, featuring white nationalist tropes and an apparent reference to the murder of Heather Heyer during the 2017 Unite the Right Rally in Charlottesville.

Heyer was killed by a Dodge Challenger driven by James Fields, who was sentenced to life in prison for the murder. Milk has risen in recent years as a white supremacist symbol, based on scientific misconceptions that caucasians are uniquely fit to digest lactose. Tiki torches were carried by Charlottesville protesters who chanted "Jews will not replace us."

In its statement, CRU said the photos were taken during a Halloween party. "Richard and other people were handed the objects, not realizing he was in front of a Dodge Challenger. It should be noted that Cody in the same photo is half Filipino and Jewish," the statement said.

Thomas declined to address the content of his chats, stating in a text message, "You have a political narrative that you're trying to push that a college club at ASU which supports free speech and moderate conservatism is actually far right."

He added, "All this said in private among members of so called trusted friends. There was a different level of decorum."

In a Facebook Messenger chat leaked to New Times, Thomas linked to a YouTube video from a channel called Special Books by Special Kids, in which a special education teacher makes videos with children living with disabilities. The video Thomas posted features a girl living with Rett syndrome. 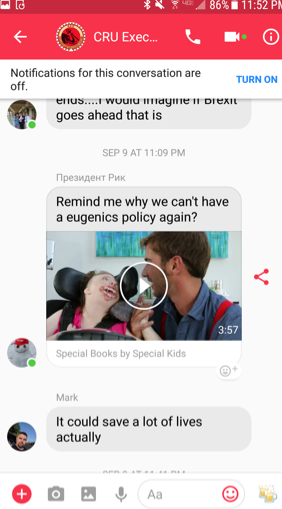 New Times source
"Remind me why we can't have a eugenics policy again?" Thomas, who uses an avatar of a snowman wearing a MAGA hat, wrote. "????????? ???," the name used by Thomas in the chat, translates from Russian to "President Rick."

In a text message explaining the chat, Thomas said, "We were talking about Iceland's eugenics abortion policy. We used examples of people who would have been aborted in Iceland." (Iceland has a liberal abortion policy, but calling it eugenics is false.)

In another chat, Thomas appears to refer to the rapper Childish Gambino, who is black, as "degenerate monkey filth." Thomas is apparently speaking with Darian Douraghy, one of the former members who wrote the dossier.

New Times Source
During what appears to be a discussion of Israel, Thomas appears to use an anti-Semitic symbol to refer to the Rosenbergs, the American Jews who were executed for espionage in the 1950s.

"((Rosenbergs)) stole our nuclear secrets and gave them to the Soviet Union too," Thomas wrote.

Anti-Semites are known to enclose names or groups of people in multiple parentheses to indicate that they are Jewish, according to the Anti-Defamation League. Thomas used the symbol again while posting a link to a video featuring Alex Jones, the infamous conspiracy theorist.

"Alex Jones on July 25th 2001 predicts 9/11 and the ((globalist)) agenda," Thomas wrote, in an apparent reference to the anti-Semitic conspiracy theory that Jews are secret puppet-masters controlling the world. 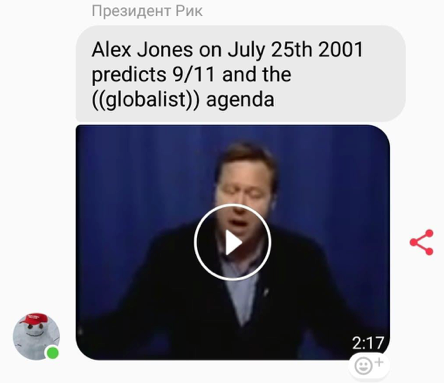 "I don't believe homosexuality or this level of degeneracy is biological it's a choice the ancient Spartans were all fucking each other because it was in the culture same thing for feudal Japan a lot of them were bisexual," Thomas wrote. 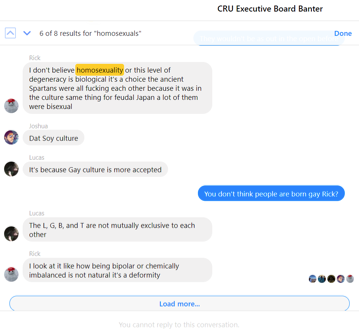 Decuyper, whose profile picture featured him and the African-American conservative commentator Candace Owens, posted in an unrelated racist Facebook group. A man named Austin Wilcox responded, "What's with the nigger in your profile picture."

Decuyper responded, "I work in state politics and co-founded a right wing organization that's already called Nazis/alt-right regularly so it helps me a lot to be camoflaged [sic] and low key on my public profile because it helps to have the support of the right wing community who thankfully don't know my more extreme views." 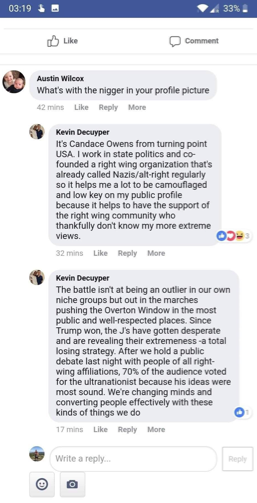 Ducuyper's discussion of Candace Owens led to a revolt by three CRU members who attempted to get him banned, according to CRU's online statement. The executive board declined to ban Decuyper, but notified members that "affiliations with such Facebook groups would result in immediate consequences."

Two of those members are John Gilbert and Darian Douraghy, according to Alex Legg, an ASU student who said he is friends with both. Legg said he was involved with the early stage of planning CRU but got kicked out in December 2017 before the group officially formed.

The screenshots and photos were collected by former members and executive board officers of CRU, including Gilbert and Douraghy, who left the group. The document is drafted as a letter raising concerns about Thomas and CRU's apparent embrace of offensive views.

"We believe that this should not go unnoticed as the people are not only dangerous to ASU students and faculty but also to society as a whole," the dossier states.

CRU's statement included links to additional screenshots from chats in which Gilbert and Douraghy themselves use anti-Semitic rhetoric.

"It’s a shame that we have so-called fellow “Republicans” who are stooping so low to use leftist rags to attack other Republicans, when the same could be done on their own words just as easily," CRU's statement said.

In the screenshots, Douraghy can be seen making jokes about the Holocaust, enclosing names in multiple parentheses, and posting text art of an anti-Semitic cartoon. 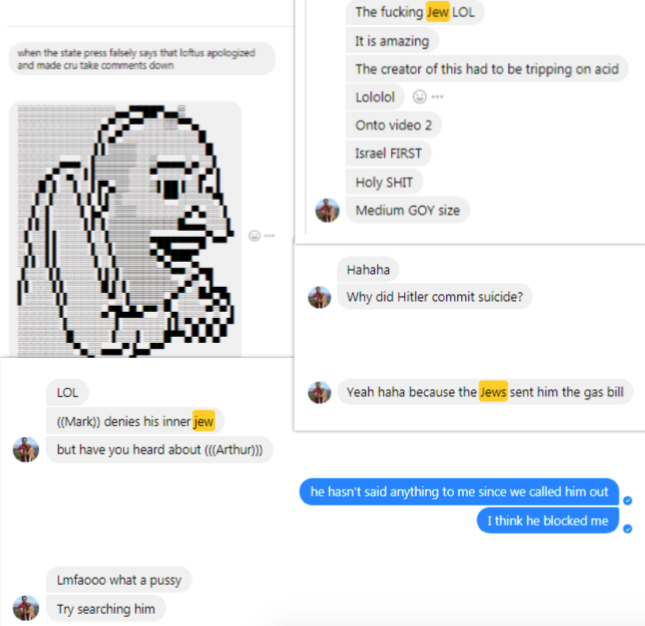 In the screenshot of Gilbert's chat, he can be seen saying, "When I get drunk I go in a tiraid [sic] about the lizard people who control the Jews." Gilbert appears to be referencing a conspiracy theory claiming that many world leaders are actually reptilians who can morph into humanoids. 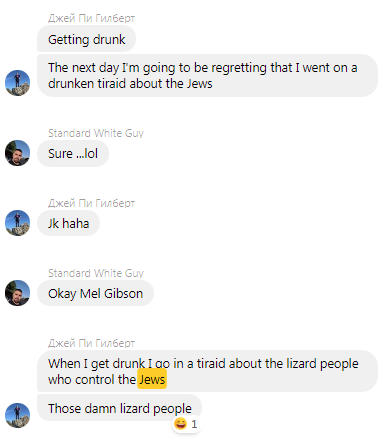 According to New Times' source, the letter was sent to ASU's student government, Associated Students of ASU, in November. ASU student body president Nikki Tran said she had not seen the letter before.

"As a student leader, I would like to personally say that I condemn any acts of discrimination and hatred," Tran said. "We embrace students with all identities and are actively working to ensure that our campus is an inclusive one."

The letter was also sent to other conservative groups on campus, including ASU chapters of the College Republicans and Turning Points USA, Legg said.

It's unclear to New Times whether any ASU faculty members actually received it.

ASU spokesperson Bret Hovell said the Dean of Students Office, which investigates student complaints, did not receive the dossier.

"I can tell you for sure that the people who would do this kind of investigation have not received it," Hovell said.

CRU last week held an event on campus with Tim Gionet, better known as "Baked Alaska," an alt-right figure who attended the Charlottesville rally as a speaker. Gionet came to ASU with Ashton Blaise Whitty, a right-wing YouTube personality, who gave a talk to the group on March 18.

New Times published a story on Gionet's visit on March 20.

That story referenced reporting by the student-run publication State Press of tweets by Thomas appearing to endorse eugenics. "I fully support a eugenics policy that utilizes infanticide on pregnancies deemed likely to produce disabled children," the tweet stated.

CRU's statement claimed the State Press and New Times took Thomas' tweet out of context, adding that he was "quoting" Planned Parenthood founder Margaret Sanger, who did in fact use eugenics rhetoric when she was active in the early 20th century. New Times, however, could find no evidence of a Sanger quote matching Thomas' tweet.

UPDATE (4/10/2019): John Gilbert and Darian Douraghy — two of the former College Republicans United members who wrote the dossier — reached out to New Times on the evening of April 9. Both apologized for their offensive posts and denounced the views expressed in them. They said they resigned after the club refused to kick Kevin Decuyper out for his association with a neo-Nazi Facebook group. They said they wrote the dossier and sent it to ASU officials, knowing full well that they themselves used offensive rhetoric in private chats.

"I feel that this article misrepresents who I am as a person, and I hope that you can update it to clarify who I truly am," wrote Douraghy. "I respect people of all creeds, and do not hold the twisted views that many members of this group do. Exposing them was a tough choice to make, as I was worried that jokes I had made in poor taste may consequently come up. Please let me reiterate that I am truly sorry for the offensive jokes I have made. It was a terrible thing to do, I feel bad for it, and will not be doing it again."

Douraghy also said he is the student pushing back against Thomas in two of the chats, defending Childish Gambino and questioning whether Thomas believes people are not born gay.

Gilbert said, "I feel awful that I made that joke. I don’t believe that lizard people control Jewish people. I was trying to use satire to make fun of the Alex Jones type people. I know it doesn’t matter what my intent was because I know the joke was not acceptable. I know I can’t take it back, but I was hoping I could at least try and clear up what I said."
KEEP PHOENIX NEW TIMES FREE... Since we started Phoenix New Times, it has been defined as the free, independent voice of Phoenix, and we'd like to keep it that way. With local media under siege, it's more important than ever for us to rally support behind funding our local journalism. You can help by participating in our "I Support" program, allowing us to keep offering readers access to our incisive coverage of local news, food and culture with no paywalls.
Make a one-time donation today for as little as $1.
Steven Hsieh was a staff writer for Phoenix New Times from August 2018 to April 2020.
Contact: Steven Hsieh
Follow:
Twitter: @stevenjhsieh