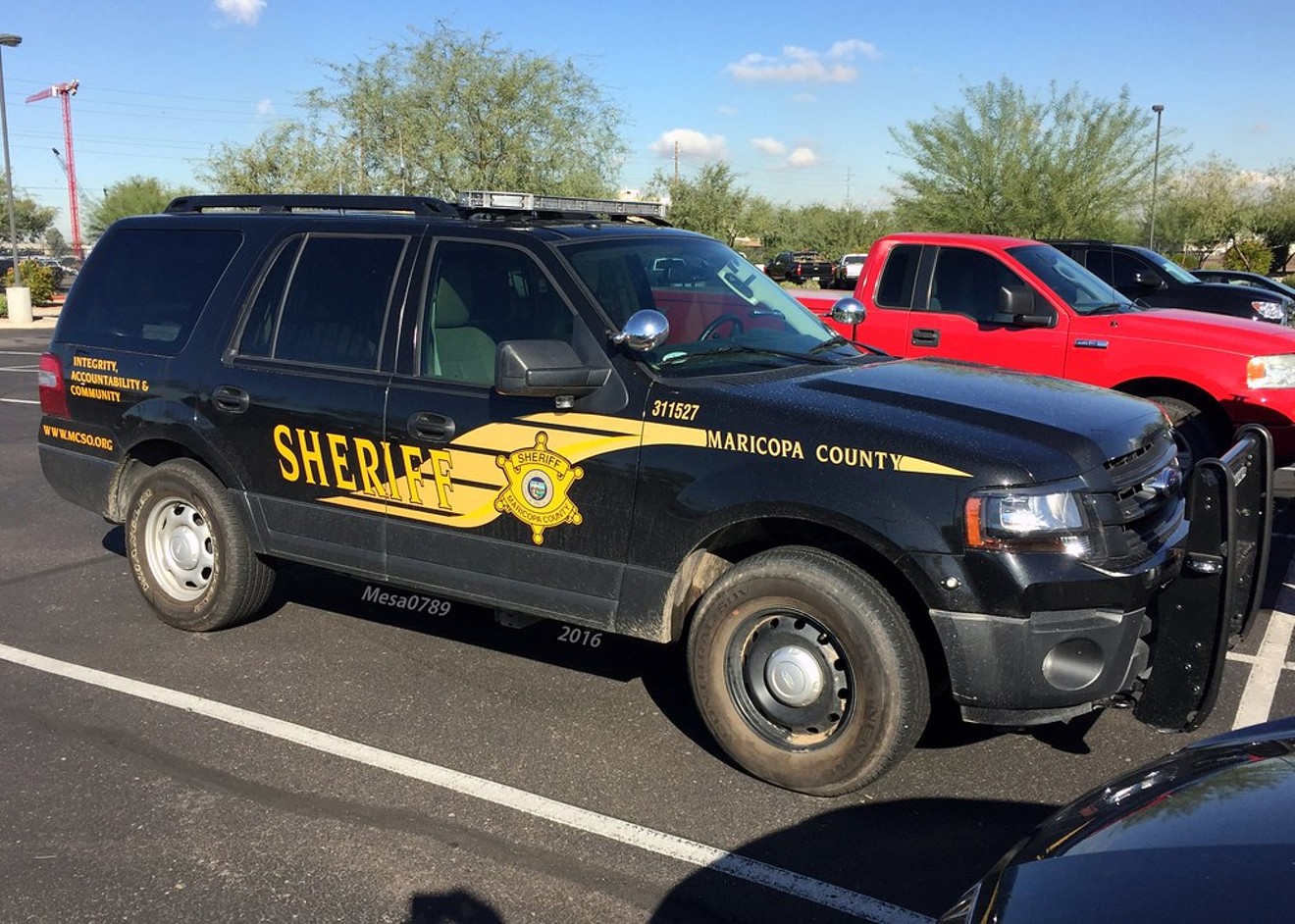 Maricopa County Sheriff's Office vehicle Flickr via Mesa0789
One man gunning to become a police officer struck his 7-year-old child in the head. Another police recruit showed such a proclivity for lying that the Tucson Police Department forced him out before he could become a cop. And a Maricopa County Sheriff's Deputy caught in a lie made things worse by seeking out a tree stump to ram his patrol vehicle into — then lied again.

These are some of the cases that stood out among those discussed at the Arizona Peace Officers Standards and Training Board's latest monthly meeting.

At a 30-minute meeting on Wednesday, the board met in its Phoenix office to review several recent cases and four new ones.

One of those new cases involves Douglas Bremer, a former Maricopa County Sheriff’s Deputy who was hired in 2007, according to the Arizona Republic's salary database. The case, according to information presented to the board, involved a bizarre incident that occurred on May 24, 2018, while Bremer was on patrol in the rural area separating Surprise and Wickenburg. That night, while responding to a call for service, instead of following main roads, he followed a dirt path that paralleled a canal.

Bremer didn't report the incident and instead remained on patrol for the next two hours. Eventually, he did call his supervisor to report the damage — but he lied about how it happened, claiming that he had sideswiped a tree stump while driving through the desert.

His supervisor asked for a photo of the damage. Upon seeing it, the supervisor told Bremer he was sending someone out to investigate the accident. That's when Bremer doubled-down on his lie.

Bremer drove out to the desert, apparently in search of a tree stump. When he finally found one, Bremer pulled up to it and sideswiped his patrol vehicle again, then waited for deputies to arrive to investigate. But those sheriff's deputies noticed the damage wasn't consistent with the information Bremer provided and noticed that there was paint transferred onto the vehicle that clearly didn't come from the tree stump.

At first, Bremer denied having struck anything besides the tree stump, but later admitted he had actually hit a fence. Then, he tried to say he hadn't hit the tree stump on purpose, but eventually fessed up to that, too. Bremer was fired. The board also voted to initiate proceedings against Bremer on Wednesday, meaning they may decide to revoke his peace officer certification after a review, which would make him ineligible to become a police officer again in Arizona.

Another serious case reviewed by AZPOST on Wednesday involved David Guerra, a cadet hired by the Kingman Police Department. According to Steve Jacobs, a compliance specialist for AZPOST, Guerra had not yet started at the academy when police were informed that Guerra had struck his son.

On July 24, 2019, Guerra's 7-year-old son was at school when he told his teacher his head hurt. The teacher noticed a contusion on the boy's forehead. When she asked about it, the boy said his father had hit him. The teacher called state officials and the police. The boy also told investigators his father had hit him in the head, as did his sister. The 9-year-old girl said their father had struck her younger brother in the head using his knuckles the day before.

When Guerra was questioned, he first adamantly denied hitting his son, but later admitted to the act. He has since been indicted and is pending criminal prosecution, Jacobs said during the AZPOST meeting. The board voted to initiate proceedings against Guerra on Wednesday, meaning the board will investigate the case and determine what action to take. It's unlikely Guerra could become a police officer anytime soon given his recent indictment for harming his child, but the board could still deny Guerra's peace officer certification should he attempt to become a police officer.

Another man seeking a badge, Stephen Perko, will also be investigated by the board after board members initiated proceedings against Perko on Wednesday. Perko was in the academy when a current Tucson police officer who used to work with him at Enterprise Rent-A-Car spotted the cadet and contacted the academy to express reservations about him.

According to the unnamed officer, Perko once had a meltdown at work and left on bad terms. Officials then gathered additional information on Perko and found he had a record of lying.

Cathy Hawse, training compliance specialist with AZPOST, said the background unit found that Perko had lied about why he was no longer working for former employers on his Tucson Police Department application and his Pima County Sheriff's Office application to be a detention officer. When confronted about this in an internal affairs interview, Perko said he lied about it because his employment history "made him unhirable." Perko resigned in lieu of termination.

In another case, the board voted to deny a Colorado River Indian Tribes Police cadet from getting his certification. According to the board, David Shatto interfered with an investigation by encouraging people at the scene of a fight not to cooperate with the police, then was dishonest with the academy staff when questioned about this incident.

More than 1,000 Arizona cops have lost their peace officer certifications since 1975 for lying, sexually harassing or assaulting others, using drugs or drinking on the job, and committing crimes like assault and theft, according to a database of police officer decertifications published by USA Today.
KEEP PHOENIX NEW TIMES FREE... Since we started Phoenix New Times, it has been defined as the free, independent voice of Phoenix, and we'd like to keep it that way. With local media under siege, it's more important than ever for us to rally support behind funding our local journalism. You can help by participating in our "I Support" program, allowing us to keep offering readers access to our incisive coverage of local news, food and culture with no paywalls.
Make a one-time donation today for as little as $1.
Meg O'Connor was a staff writer for Phoenix New Times from April 2019 to April 2020.