Chief Ramon Batista said he was "angry and deeply disappointed" after watching the videos. Ray Stern

A May 17 video released on Thursday depicts officers inflicting pain on a 15-year-old armed robbery suspect as he's asked the location of a gun allegedly used in his crime. The video ramped up public outrage from earlier in the week after a May 23 surveillance released showing a group of officers punching an unarmed man in the face repeatedly, then shoving his head into an elevator door.

"I'm angry and I'm deeply disappointed from what I see in these videos," Batista said during a news conference on Friday afternoon. "They are disturbing and they will not be tolerated."

Batista announced that besides the official investigations of the incidents, which are being handled by the Scottsdale police department, Mesa is contracting with the national Police Executive Research Forum (PERF) to review use-of-force incidents of the past three years. He's also hiring former Maricopa County Rick Romley to help review the two latest video-recorded incidents.

In the May 17 video, officers responding to reports of an armed robbery call the suspect they found a "motherfucker" before putting him in handcuffs, bending him over a patrol car, and applying pressure points to inflict pain. The suspect, who officers later learned was 15, cries out in pain while officers ask him, "Where's the gun?" 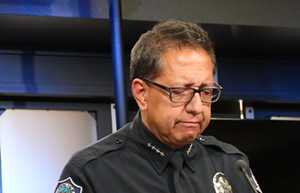 Chief Ramon Batista said he was "angry and deeply disappointed" after watching the videos.
Ray Stern
Batista said the teen was later charged with armed robbery and aggravated assault.

In the May 23 video, suspect Robert Johnson failed to comply with orders given to him by a group of officers who had been called out to a domestic disturbance. Johnson's friend sat down as ordered, but Johnson – as can be heard in body-cam videos released this week – acted with passive defiance and told the officers he didn't want to sit down. He appeared unwilling to submit to the officers – and the officers pummeled him while trying to take him to the ground.

Community members should be treated to the "utmost professionalism" by officers no matter the circumstance. "Quite honestly," Batista added, "that's not what I saw in those videos. And that will change."

PERF will "shine a glaring light on areas where we have fallen short, and they will help us fix it ... From the bottom of my heart, I promise you, we will fix this." 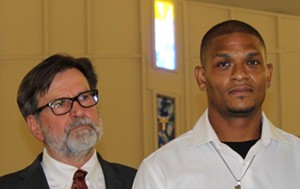 Johnson was later charged with disorderly conduct and hindering.

Andre Miller, pastor of New Beginnings, said on Thursday he's responsible for bringing the first video to the public's attention. Johnson is a church member, and his mother let the pastor know about the fight with police. Miller to obtained the surveillance video of the incident and turned it over to Batista.

The chief launched an investigation after seeing it and put four officers – including one supervisor – on administrative leave pending the outcome of the probe.

On Friday, police revealed that they'd put a fifth officer on leave from that incident, and two other officers on leave following review of body-cam footage from the May 17 arrest of the teen.

Other members of that squad will apparently continue to patrol the streets in the coming days, as investigators probe the actions of seven of their squad-mates.

Batista said that the department was reviewing two other videos involving potential questions over officers' use of force. 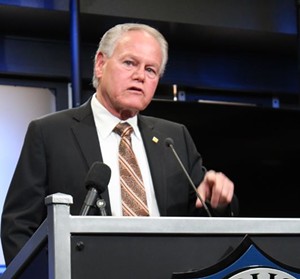 Former Maricopa County Attorney Rick Romley has been hired by Mesa police to help review the two video'd incidents.
Ray Stern
Meanwhile, Mesa police union leaders said after Friday's news conference that they were concerned about how the chief characterized officers' actions as a likely "mistake" while the investigation was still starting.

Batista announced on Wednesday that he'd implement new policies that direct officers to deliver hard punches or elbow strikes to a subject's face only if the subject was actively fighting them.

But Will Biascoechea, vice-president of the Mesa Fraternal Order of Police, said that morale is low over the chief's statements and officers are "confused" about "knee-jerk" policy changes. If a new policy is needed, he said, that supports the idea that the officers on leave were acting according to existing policy.

Biascoechea pointed out that Johnson's friend didn't get involved in an altercation after doing what police told him to do.

"If you would just comply, we wouldn't have to use force," he said.

Romley, who's retired, said he wasn't looking to take on another "headache."

"But when I met the chief ... I know he's sincere. I know he really wants to do what's right for this community," Romley said.

Police also released the names of the five officers on leave from the May 23 incident. They are:

The latest crisis comes several months after a jury acquitted former Mesa officer Phillip "Mitch" Brailsford of a murder charge, following his shooting death of an unarmed suspect in 2016.
KEEP PHOENIX NEW TIMES FREE... Since we started Phoenix New Times, it has been defined as the free, independent voice of Phoenix, and we'd like to keep it that way. With local media under siege, it's more important than ever for us to rally support behind funding our local journalism. You can help by participating in our "I Support" program, allowing us to keep offering readers access to our incisive coverage of local news, food and culture with no paywalls.
Make a one-time donation today for as little as $1.