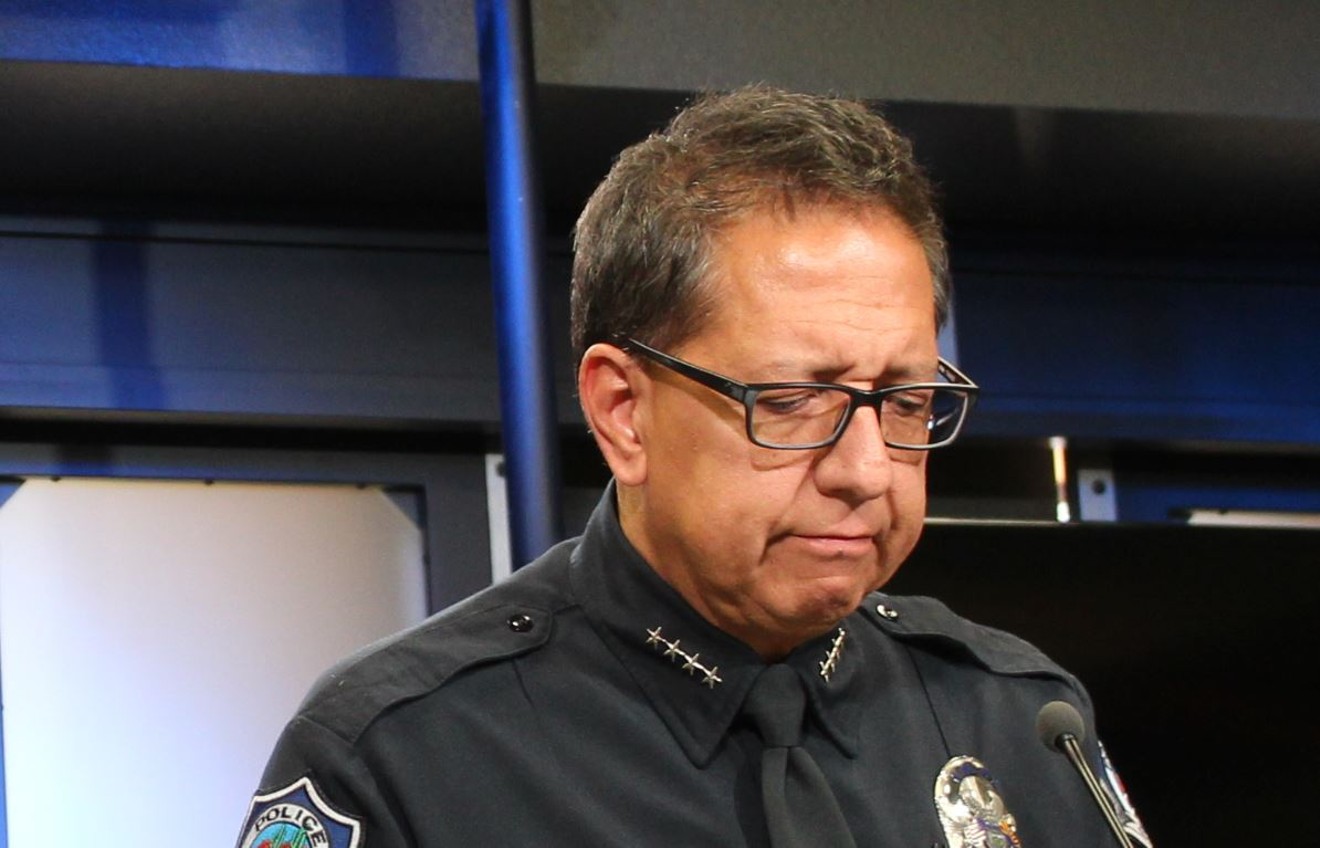 Chief Ramon Batista Ray Stern
(UPDATE: This story was changed at 3:30 p.m. to include a comment from Mesa city manager Chris Brady confirming that Batista has resigned.)

"Chief Batista has served this community well, taking over this department during some challenging times," Mesa City Manager Chris Brady said in a statement to the Arizona Republic. "He worked hard to connect with the community and provide expanded field training for our officers."

Batista's resignation comes after months of turmoil with the Mesa police union, which initiated a vote of no confidence against the chief in May. Comments contained within a leaked survey of Mesa Police Association members showed that a number of Mesa police officers were furious with Batista for attempting to reform the troubled department.

Batista was hired in July 2017 following the high-profile shooting of Daniel Shaver, an unarmed Texas man who was gunned down by Officer Philip "Mitch" Brailsford as he begged for his life in a hotel hallway. Batista has since made several changes to the department, including bringing in independent investigators to review the Mesa police practices, condemning a video that depicts Mesa police officers punching Mesa resident Robert Johnson in the head repeatedly and another video that shows officers assaulting a handcuffed 15-year-old, and instituting implicit bias and de-escalation training.

Comments from the leaked survey show how Batista's willingness to speak out against his own officers' use of force and his attempts to reform the department earned the ire of some officers.

"The chief is a liberal snowflake who cares more about public image than his officers," wrote one officer in the survey comments back in May.

"The chief is not interested in what's best for officers or those he leads nearly as much as he is interested in satisfying the public, and notably, the small pockets of the anti-PD public," wrote another.

In June, the Mesa Police Association announced that 95 percent of its 564 members said they do not have confidence in Chief Batista (there are about 1,200 Mesa police employees total). At that point, the union brought the results of the vote to the mayor and the city council, which issued a statement supporting the Mesa Police Department and its employees.

At the time, Batista released a statement reaffirming his decision to try to reform the department.

"I’m committed to leading this department and I stand by my officers as they carry out their duties to protect and serve this city," Batista said in a statement emailed to New Times. "The support from our community could not have been made clearer as they passed a public safety sales tax to ensure we have the staffing and equipment to keep them safe."

Some rank-and-file officers were irate that Batista released the bodycam footage of officers pummeling 35-year-old Robert Johnson. That incident began on May 23, 2018, when Johnson accompanied a friend who was picking up his things from his ex-girlfriend's apartment. While there, someone called 911 and alleged that Johnson's friend had tried to force his way into the apartment. As the two left, they ran into Mesa police, who separated them.

Video of the arrest shows Johnson was kneed twice in the stomach and punched six times in the head during the altercation that followed.

The charges against Johnson has since been dropped, and he has filed a federal lawsuit against the city of Mesa.


Batista asked Scottsdale police to conduct an independent review of the Johnson case and of the choking of the 15-year-old boy.

After these high-profile incidents and others, Batista changed department policy to prevent officers from striking people in the head and face unless they are resisting arrest.

Not all officers disagreed with Batista's changes.

"I feel the Chief is in a no-win situation," wrote one officer in the anonymous survey comments. "Under the previous admin our moral compass went sideways. We had an A/C [assistant chief] that emphasized kicking ass and scaring the public, and a Chief who turned a blind eye to everything. Our academy went from training guardians to training 'Spartans.' Our detectives became lazy and civilian staff became bitter. The line-level officers were happy because we had someone 'speaking for us...' but in the end neither Milstead nor Silbert really cared about anyone but themselves."

"Now...we face federal criminal probes, lawsuits, and civil rights inquiries. All of this because [former Mesa Assistant Chief Heston] Silbert wanted to 'kick ass.' In comes Batista who should not have been selected by the City, especially because they knew about all of the brewing issues. He comes in to a mess and is now in charge of dealing with it," the officer continued. "He has to make decisive moves to keep the City happy, the public trust, and keep the DOJ off our backs. I don't like some of the things he does or says, but then again, I never agreed 100% with any Chief. I don't think he is trying to 'screw the department' I don't see him as some 'libtard' as he's been called. He was served a floating dumpster fire and told to deal with it...The MPA and FOP are screwing us by convincing officers Batista is the bad guy and throwing around phrases like "vote of no confidence."
KEEP PHOENIX NEW TIMES FREE... Since we started Phoenix New Times, it has been defined as the free, independent voice of Phoenix, and we'd like to keep it that way. With local media under siege, it's more important than ever for us to rally support behind funding our local journalism. You can help by participating in our "I Support" program, allowing us to keep offering readers access to our incisive coverage of local news, food and culture with no paywalls.
Make a one-time donation today for as little as $1.
Meg O'Connor was a staff writer for Phoenix New Times from April 2019 to April 2020.