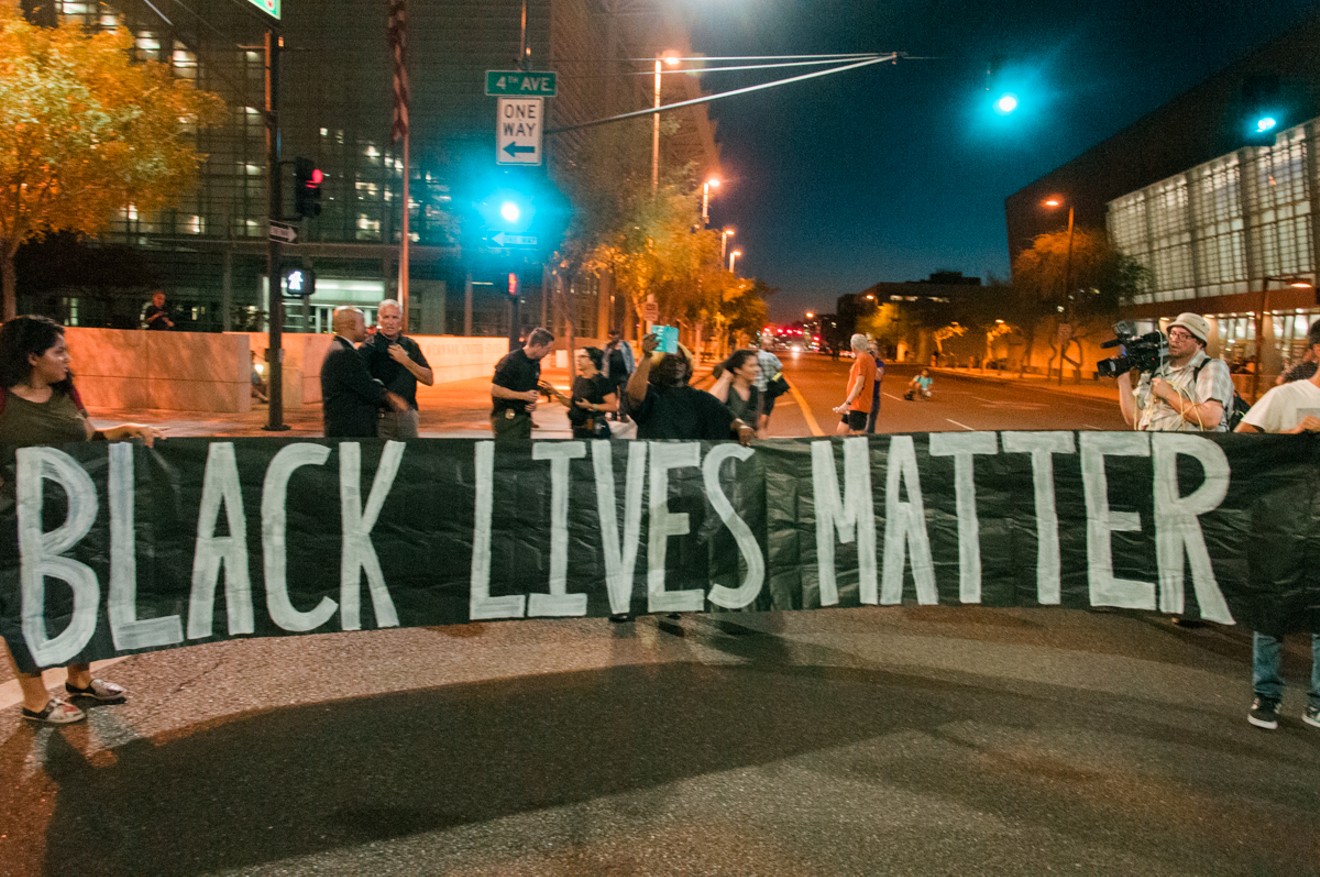 Protesters unfurl a "Black Lives Matter" banner in Phoenix earlier this year. Ash Ponders
It was not a slow news year.

Covering the news in 2020 was like trying to drink from a waterfall: Pandemic. Lockdowns. George Floyd. Protests. Elections.

More seemed to be happening at once than ever before and public demand for news went off the charts. When people could no longer go out to restaurants, bars, gyms, or concerts, they often sat glued to their computers screens, looking for news. As our audience numbers showed, articles in Phoenix New Times delivered its share of what they wanted to read. Here are the top 10 news articles from our site in 2020:

New Times source
Most times, when a mine needs new land to plop millions of pounds of waste on top of, environmental reviews and public hearings are standard. But when it's the Arizona Land Department consummating the deal, the process is done much more quietly. Such was the case with a 17,000-acre sale in January that, while raising $13.5 million for Arizona schools, will allow a new tailings storage facility on the land that will negatively affect it for centuries. The quietude ended when your favorite weekly newspaper learned of the deal and the story went viral.

9. How the Coronavirus Will Make Phoenix's Heat Problems Worse

Tents near the homeless shelter in downtown Phoenix, pre-coronavirus.
Ray Stern
The lede of this May 2020 story — "It's going to be a hellishly hot, long summer for a lot of Arizonans..." — sure turned out to be true. It was Phoenix's hottest summer on record, followed by the hottest autumn on record, all of which felt even hotter because of the pandemic restrictions. The article detailed how heat affects the privileged and under-privileged, how cooling stations and refuges for unsheltered homeless people like libraries would be minimal because of the pandemic, and how debt was piling up in low-income households due to a moratorium on utility shutoffs.

8. Scottsdale Is a 'No [N-Word] Zone,' Local Realtor Says on Video

Paul Ng was arrested on charges of disorderly conduct.
Youtube
You'd have to be a total racist jackass to tell Black people they were in a "no [n-word] zone]," and to do it while said Black people were clearly recording you on video. Meet Paul Ng. He's a former independent contractor for Russ Lyon Sotheby's International Realty who did just that. After the video went viral, the real estate company fired him.


7. 'I'm Not in Your Country': Phoenix Constable Threatens Shopkeeper

Readers couldn't get enough stories of bigots being outed this year, especially when the evidence was on video for all to judge. This story from July about a hot-headed, offensive constable fried our servers. Doug Middleton, a longtime constable from northeast Phoenix, exposed his nasty side to the world when a surveillance video caught him telling a shop owner, "I'm not in your country, I don't play your rules." The presumptuous minor elected official actually was in the shop owner's country, since the owner — while of Russian descent — was born in New York. The agency that oversees constables later cited Middleton for his bad behavior.

National Guard
New Times diligently pulled out the stops covering the pandemic, with all staff pitching in to cover every angle. One of the big initial stories was the lack of confidence by doctors and nurses in one of the largest health care companies in Arizona. Banner wasn't providing the proper PPE and had made hasty presumptions about the infectious nature of the novel coronavirus, according to some of the company's key personnel. The company continued to limit its employees' use of PPE at least through April, sources said.

5. Arizona Rep. Walt Blackman: George Floyd Is 'Not a Hero,' BLM Is a 'Terrorist Organization'

Rep. Walt Blackman
Facebook
You've got to hand it to Representative Walt Blackman of Snowflake, the first Black elected Republican representative in Arizona history: He knows his community. The community of Snowflake and surrounding right-leaning area, that is. As uprisings, protests, riots, and looting broke out across the country in the aftermath of George Floyd's death on video under the knee of a Minneapolis cop, Blackman released a video of himself wearing a cowboy hat and announcing that George Floyd is "not a hero." He also said that Black Lives Matter is a "terrorist organization." If people hadn't heard of Blackman before, this viral article may have been an introduction.

YouTube
Dream City Church leaders were excited to host an indoor Trump rally in Phoenix, but people kept telling them it might be dangerous, given that there was, you know, a once-in-a-century pandemic raging. Fortunately, they knew someone in the air-purifying business who set them up. Then they published a video telling the public, "So when you come into our auditorium, 99 percent of COVID is gone... So you can know when you come down here, you'll be safe and protected." Experts pointed out that ionization could help rid the air of any pathogens, but that wouldn't mean that people with COVID-19 in a crowd the size expected at the rally couldn't infect others. State Attorney General Mark Brnovich warned the church and company to quit exaggerating the product's abilities.

YouTube
Remember when the biggest thing in the news was "Penis Man?" In the world that existed just before COVID stole all the attention, someone was scrawling those words across buildings and other property in downtown Tempe and Phoenix, causing authorities to freak out and social media to explode with both criticism and praise of the graffiti tagger. The unlikely hero's downfall came when his Phoenix apartment was raided by police. He said it was 25 SWAT officers. Police later said a four-man tactical response team did take part in the raid, but no more than 15 officers total were involved.


2. Arizona Sheriff Who Refused to Enforce Lockdown Restrictions Has COVID-19 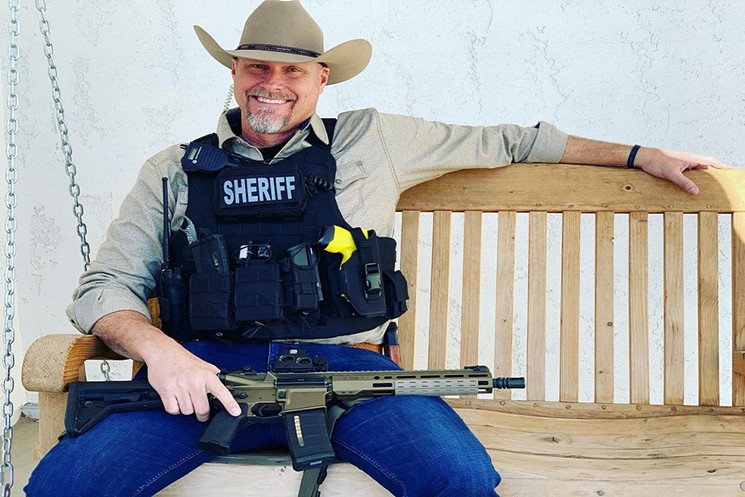 Pinal County Sheriff Mark Lamb
Twitter
Sheriff Mark Lamb wasn't about to enforce any damned, anti-freedom pandemic restrictions in his rural county southeast of metro Phoenix. He told New Times as much in a May 1 article. Then, as New Times reported on June 17, he announced he had tested positive for COVID-19. We published many articles this year that were more comprehensive and important than this one, but the internet likes a good case of schadenfreude: The article was our second-most popular of the year.

Banner - UMC Tucson/University of Arizona
Are Arizonans really this stupid? Apparently so. As the early stages of the pandemic were gripping the country, with 1,000 people dead and more dying of a virus that was still not well understood, Trump announced in mid-March that the anti-malaria drug chloroquine showed a lot of promise in treating COVID-19. The Food and Drug Administration quickly countered that the announcement was premature, but not before one Arizona couple got its hopes up and consumed the chemical at home. A man died and his wife ended up in critical care.
KEEP PHOENIX NEW TIMES FREE... Since we started Phoenix New Times, it has been defined as the free, independent voice of Phoenix, and we'd like to keep it that way. With local media under siege, it's more important than ever for us to rally support behind funding our local journalism. You can help by participating in our "I Support" program, allowing us to keep offering readers access to our incisive coverage of local news, food and culture with no paywalls.
Make a one-time donation today for as little as $1.