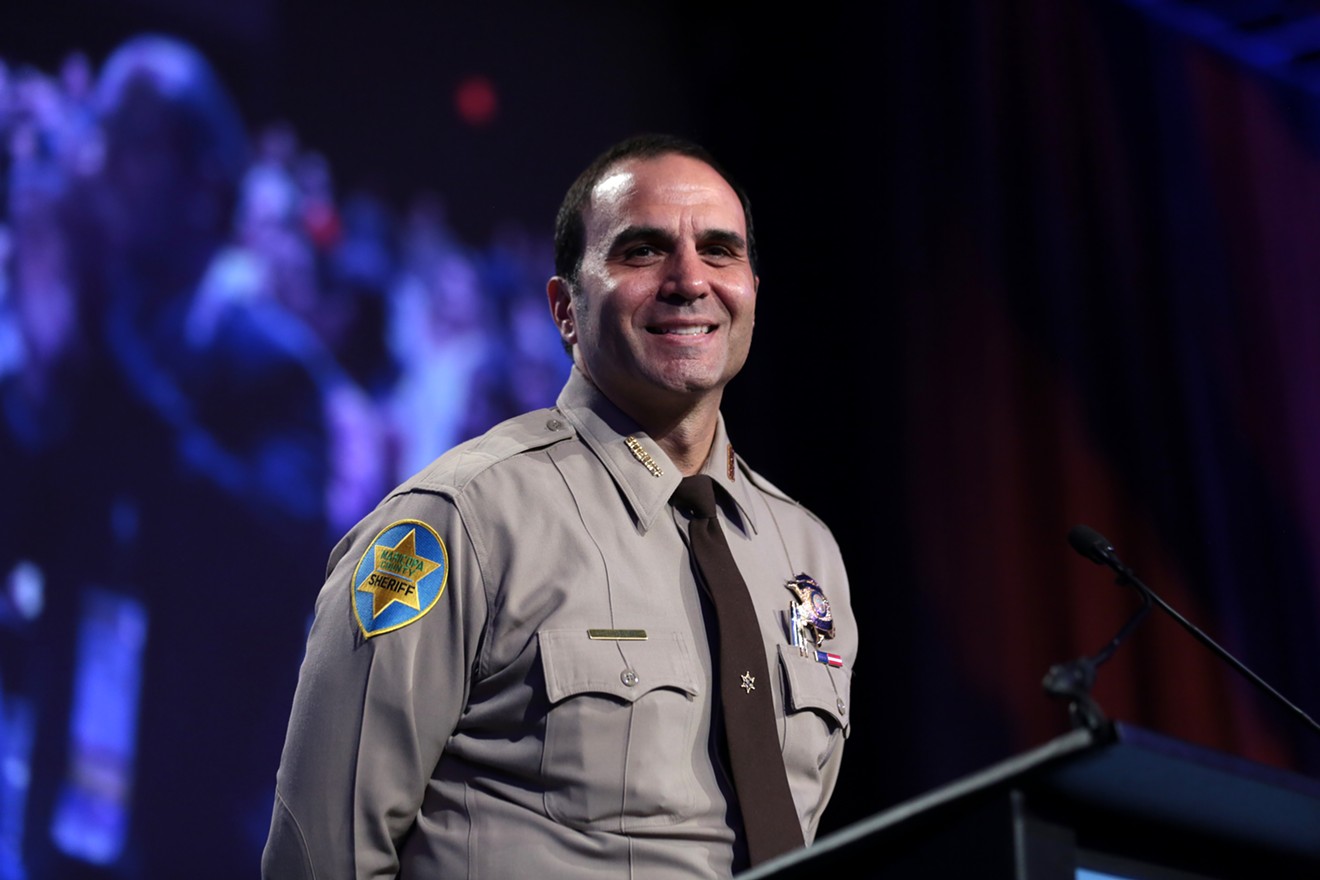 Maricopa County Sheriff Paul Penzone Gage Skidmore/Flickr
When Paul Penzone replaced Joe Arpaio as Maricopa County's Sheriff, he reversed several of Arpaio's more outrageous and abusive practices, like keeping inmates in outdoor tents and forcing them to wear pink underwear. Sometime in the past year, Penzone appears to quietly have done away with another of Arpaio's programs: chain gangs.

In 1995, Arpaio brought back chain gangs, a practice of chaining detainees together and forcing them to perform menial labor that had long been abandoned across the United States. A 1999 documentary by ABC Australia features Arpaio bragging about starting the only female chain gang in America.

"I take some heat on it, but I also take the credit," Arpaio said as women wearing black-and-white striped uniforms shuffled behind him under the hot Arizona sun, chained together by their ankles. In the video, the women were forced to dig a grave for a homeless person who had been struck by a car. "Some people don't like it. The civil liberties union, Amnesty International, the Justice Department. But it's been here three years and it'll be here as long as I'm the sheriff."

Penzone, who denied Arpaio a seventh term in the November 2016 election, was still hesitant about getting rid of the chain gangs 10 months after assuming office.

In an interview with Police Magazine dated October 14, 2017, Penzone was asked whether there was "any positive aspect of the previous administration" that he planned to continue.

"There are many areas that are positive," Penzone replied. "It's just that, you know, can you improve on them and see if the value still continues. So, what was termed in the past as the 'chain gang,' I'm still, you know, thinking about.

"Do we just change the name?" Penzone asked, appearing to backtrack from an earlier promise published by the Associated Press in November 2016, in which he said he would "dramatically scale back the chain gangs by only using them in places such as parks."

Today, the Maricopa County Sheriff's Office website still boasts that a "unique feature" of the county's Estrella Jail is that it is home to "the nation's only female chain gang."

MCSO's website boasts about Estrella Jail's chain gang.
Maricopa County Sheriff's Office
The website was updated in June 2018 to remove a section describing the Tent City facility, but the line about the "nation's only female chain gang" remains to this day.

Asked whether the Maricopa County Sheriff's Office is still using chain gangs, when and where the chain gangs are used, and whether the detainees are still chained together, the sheriff's office said things have changed.

"Both male and female MCSO inmates are eligible to volunteer for the Inmate Labor Detail," said Michael Cavaiola, director of communications for the Maricopa County Sheriff's Office. "This requires an interview and qualification process of the inmates, and there is currently a waiting list to participate."

"As of June 2018, both the male and the female work details work only in and around MCSO facilities," Cavaiola said. "They are not chained together during their work."
KEEP PHOENIX NEW TIMES FREE... Since we started Phoenix New Times, it has been defined as the free, independent voice of Phoenix, and we'd like to keep it that way. With local media under siege, it's more important than ever for us to rally support behind funding our local journalism. You can help by participating in our "I Support" program, allowing us to keep offering readers access to our incisive coverage of local news, food and culture with no paywalls.
Make a one-time donation today for as little as $1.
Meg O'Connor was a staff writer for Phoenix New Times from April 2019 to April 2020.