City to Approve $125,000 Settlement for Woman Who Says Phoenix Cop Stalked Her 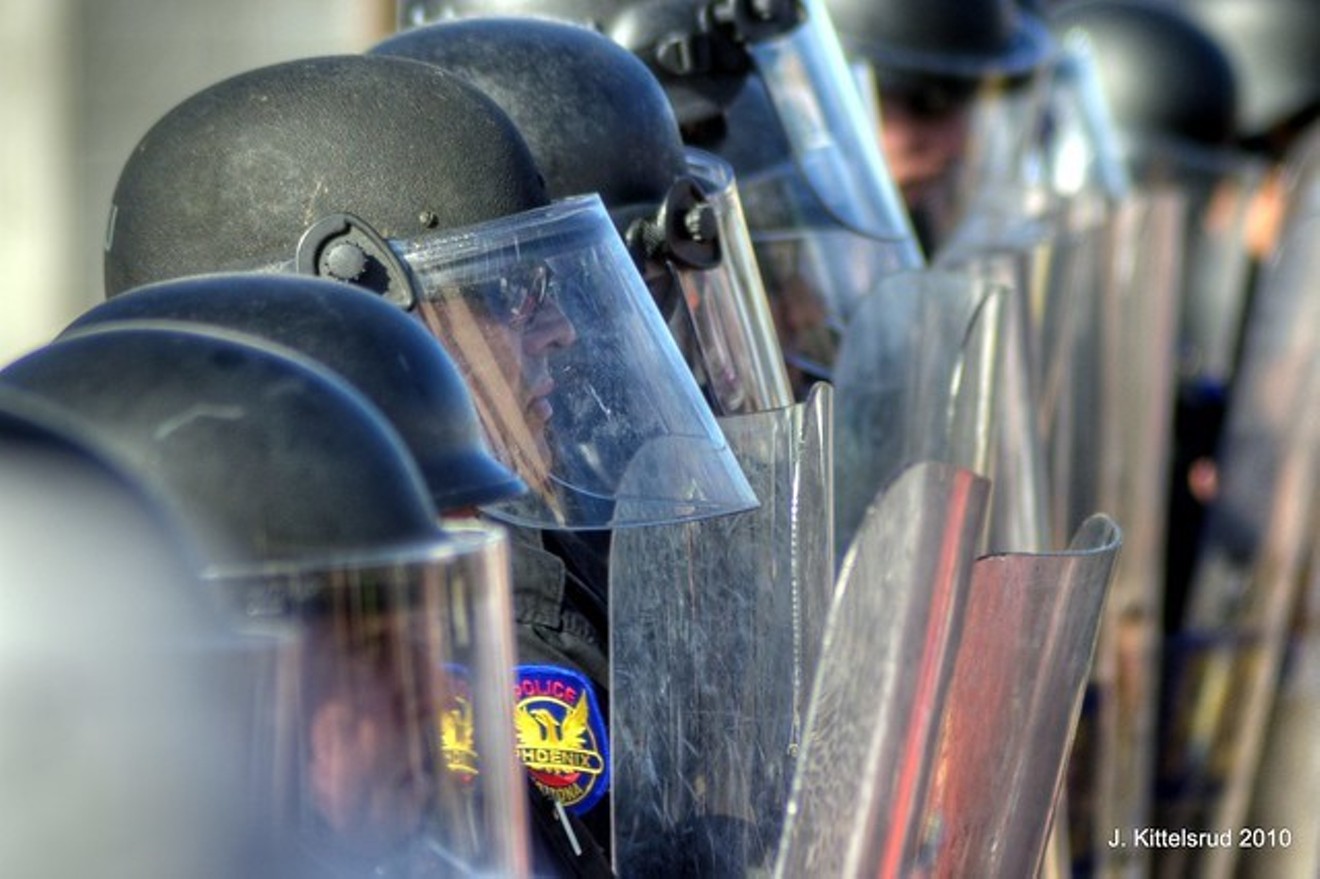 On May 15, the woman filed a federal lawsuit in Arizona's District Court against the city of Phoenix and four Phoenix police officers, alleging that officer Marcos Rodriguez stalked her, showed up at her house uninvited, made unwanted sexual advances, and pointed a gun at her head.

After Phoenix New Times published a story about the woman's claims, a spokesperson for the Phoenix Police Department confirmed that Rodriguez had been placed on administrative leave and was under investigation by the department's professional standards bureau. Phoenix police did not immediately respond when asked about the current status of that investigation and whether Rodriguez is still on administrative leave.

While the city has approved a six-figure payout for the woman, city officials in court denied any wrongdoing. The case was settled less than three months after its July 9 filing. The woman's attorney, David Dow, did not respond when asked to comment on the case. New Times is withholding the abuse victim's name.

In her lawsuit, the woman alleges that on August 26, 2018, she was on her way to the grocery store when a Phoenix police vehicle abruptly pulled out onto the road, causing her to swerve into the next lane. It was a Sunday, and the woman had just left church. She said she saw the officer was on his cellphone, but by the day's end, that transgression would be inconsequential compared to everything else the officer allegedly did to the woman.

The woman said that after the police vehicle cut her off and she got back into her lane, the officer pulled up next to her, rolled down the window, and signaled to her to roll down her window as well. He apologized to her; she said it was fine and tried to leave, but he motioned for her to pull over. So she did.

That's when Rodriguez walked over to her car and asked her to get coffee with him, the lawsuit states. Nervous and confused, the woman looked back toward Rodriguez's parked vehicle and noticed a female officer sitting in the front. The woman asked if Rodriguez's partner would be joining them.

Rodriguez said they had been called on an emergency and his partner would not be coming, the lawsuit said. So the woman declined, telling Rodriguez he ought to make the emergency call a priority. Rodriguez insisted they go get coffee without his fellow officer, allegedly stating that his partner "knows how I am."

The woman declined again, and at Rodriguez's insistence, she gave him her business card. He walked back to his patrol vehicle, and she thought that would be the end of it — until he started texting her.

Around 1 p.m. on August 26, Rodriguez asked the woman if they could talk. Then he told her he was right outside her door. But the woman had never given him her home address.

She opened the front door but left the security screen closed. She asked Rodriguez what he was doing at her home, in uniform and holding the computer from his patrol vehicle.

She let Rodriguez in her house, believing he was there to make a report after almost hitting her car earlier in the day. Rodriguez set his computer on her dining room table and began telling the woman that they ought to be friends, and that she needed a friend like him because he is a police officer and she lives alone.

The woman alleges that Rodriguez began making unwanted sexual advances and asked if he could kiss her. She told him no, noticed his wedding band, and told him it is against her values to have sexual contact with a married man. She says Rodriguez then showed her a picture of his wife and said "she is boring, that his marriage is dead, and there's no passion."

He said he is a passionate man, and allegedly grabbed his genitals through his uniform and asked her, "Don't you want some of this?" Then, he allegedly moved his pelvis toward her and hovered over her as she was seated at the dining room table.

Rodriguez, who had braces, allegedly kept licking his mouth and told the woman he "could teach her how to kiss, as he has passion." Frightened, she told him she had to go to the movies with a friend and that he needed to leave.

When the woman at one point pushed on Rodriguez's chest to get him away from her, she says she hurt her fingers on the vest, and asked what it was that hurt her. He asked her if she wanted to see, then started to unzip his vest. Then, he pulled out a gun.

He said "if a delinquent on the street were to disarm them, he could grab them," the lawsuit states, then demonstrated on the woman by putting his arm around her neck and pointing the gun in her face. She said she was scared of guns and asked him once again to leave her apartment, which he did.

The woman says in the lawsuit that she has since become anxious and scared for her safety. She says she has since has moved out of her apartment so Rodriguez cannot find her. She is suing the city for violating her civil rights, intentionally inflicting emotional distress, invasion of privacy, false imprisonment, and aiding and abetting.

The lawsuit references an investigation, though it's unclear whether it was a criminal investigation or an internal affairs investigation. The woman alleges she is "aware of various tape recordings including ones by defendant [Carmina] Theriault where a confrontation call was attempted." Theriault, as previously reported, was apparently at a police department office the woman visited last year to make her complaint.

After New Times wrote about the lawsuit against Rodriguez, someone sent an unmarked manila envelope to the New Times office. The envelope contained printed-out pages of the woman's Facebook account, a typed one-page letter, and police reports previously filed by the woman. The letter was signed, "a concerned citizen," and alleges that the woman had not suffered financial hardship as a result of Rodriguez's actions but rather, had been traveling the world, as seen in Facebook photos sent with the letter.

The anonymous letter-writer doubted the woman's story and sent a police report obtained through a public records request (as indicated by a stamp on the papers) detailing a domestic violence report the woman made against her husband in May 2018. The husband denied the allegations and the complaint was closed "as there are no injuries, no witnesses, and each has conflicting versions," the police report states.
KEEP PHOENIX NEW TIMES FREE... Since we started Phoenix New Times, it has been defined as the free, independent voice of Phoenix, and we'd like to keep it that way. With local media under siege, it's more important than ever for us to rally support behind funding our local journalism. You can help by participating in our "I Support" program, allowing us to keep offering readers access to our incisive coverage of local news, food and culture with no paywalls.
Make a one-time donation today for as little as $1.
Meg O'Connor was a staff writer for Phoenix New Times from April 2019 to April 2020.