Where Does This Phoenix City Council Candidate Really Live? 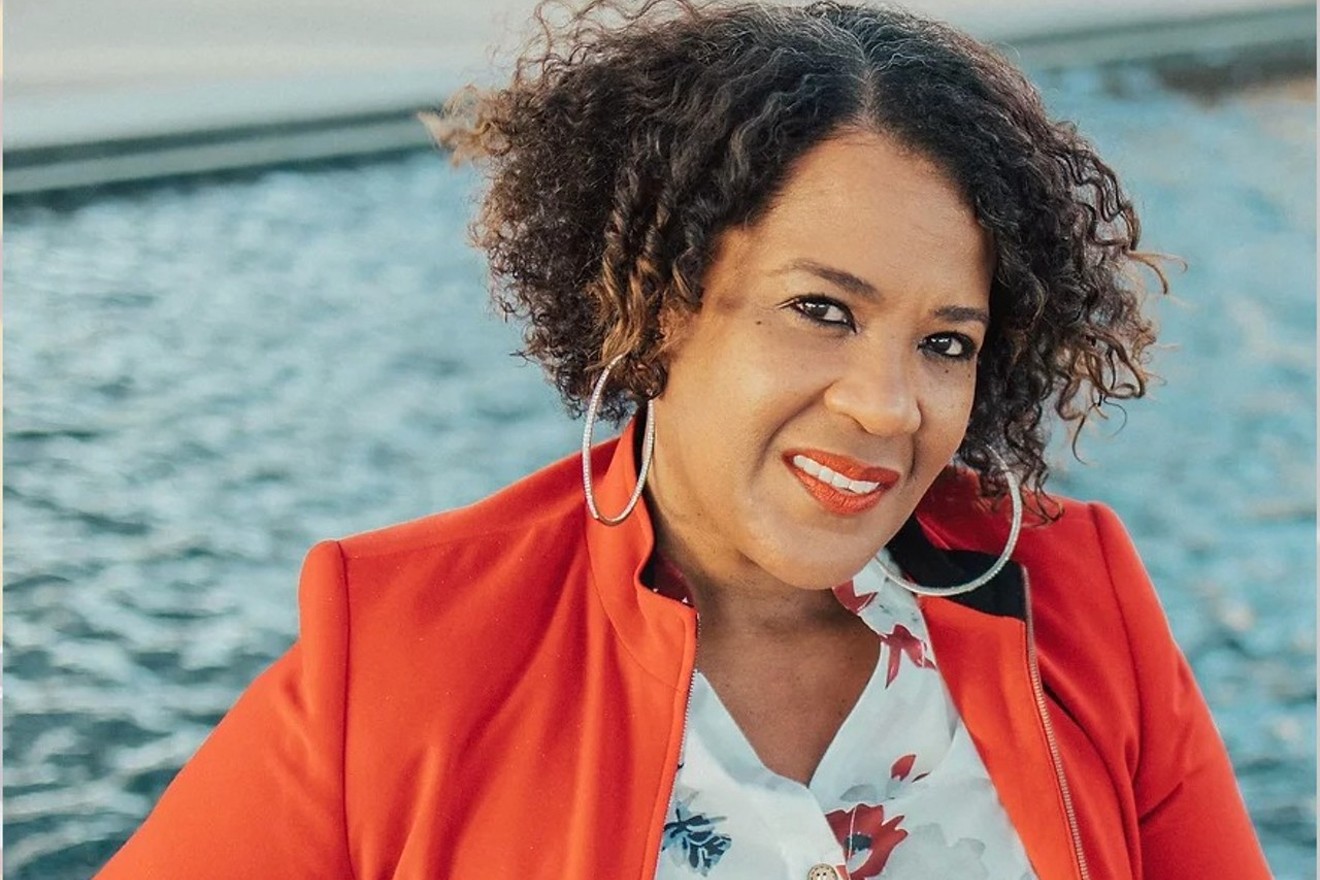 But the address on the form, filed with the city clerk, is to a home she doesn’t own in South Phoenix. The home she does own, a Spanish colonial house valued at $800,000 with a well-manicured yard located north of Carefree Highway, is one of three she’s purchased with her husband since 2008 in the upscale Anthem planned community.


The ranch house in South Phoenix, with a market value of $23,000, has metal bars covering the windows and heaps of debris littering the front yard. It’s owned by the parents of a candidate for the Arizona House of Representatives.


The house in Anthem sits in District 2 in the upper reaches of north Phoenix. The one in South Phoenix? It’s in District 8, one of the southernmost in the city. It’s also where Ceballos-Viner is running to unseat incumbent City Councilmember Carlos Garcia.


Where Ceballos-Viner actually lives is critical to her campaign. City council hopefuls “must maintain permanent residence within the district from which the candidate is nominated,” according to the city clerk’s office. It’s a 45-mile drive across several council districts between the two homes.


For Ceballos-Viner to call District 8 home, she’d be living off Baseline Road in a friend's house, while her children and her husband — Phoenix Police Department Commander Darren Viner, who runs the Black Mountain Precinct in north Phoenix — live in the home in Anthem. Denise Ceballos-Viner, candidate for Phoenix City Council in District 8, claims to live in this modest ranch home in South Phoenix owned by the parents of Tatiana Peña, who's running for Arizona's state House.
Elias Weiss

In the Friend Zone

At the South Phoenix home, where the 55-year-old city council candidate insists she lives, the name affixed to the mailbox is Peña.

Tatiana Peña has ties to the controversial Latinos for Trump movement, is a Republican like Ceballos-Viner, and is gunning for a seat in the state House. Her parents, Ana and Manuel Peña, own the house that Ceballos-Viner claims to live in. Peña once lived there, too. She and Ceballos-Viner have endorsed each other's campaigns on social media and campaigned together.


After a couple minutes of congenial small talk, Peña hung up the phone mid-question during an interview with Phoenix New Times and seems to have blocked our phone number. Ceballos-Viner did not respond to numerous interview requests from New Times. She quipped in a recent Facebook post that "the media only loves to share negativity and fear."

City officials told New Times they matched Ceballos-Viner’s South Phoenix address to her voter registration, and it was a match.


“The Phoenix City Charter requires council district candidates to, at the time of nomination and during their tenure, maintain permanent residence within the district from which they are nominated,” said Spencer Blake, spokesperson for the clerk’s office. “At the time of filing, the City Clerk’s Office verifies the candidate’s voter registration information on file with Maricopa County and confirms that the candidate’s registered residential address matches the address on the acceptance of nomination form.”

But in July, when Ceballos-Viner filed a financial disclosure statement as part of her campaign, she was required to list property ownership unless it was her primary residence. The Anthem property — which she and her husband own, according to real estate records — is not listed on the disclosure form. Denise Ceballos-Viner owns this home with an $800,000 market value in north Phoenix with her husband, but she claims she doesn't live there.
Elias Weiss

'I See Her Sleep Here Every Single Night'

Neighbors of either home don't clear up the question of Ceballos-Viner's residency.

“I don’t think [Ceballos-Viner] lives here,” said Barbara Blackman, who lives across the street from the Peñas in South Phoenix. “I’ve never seen her. It appalls me that there are so many versions of the truth.”


But Alberto Rodriguez, who lives next door, has seen Ceballos-Viner around the neighborhood. Earlier this year, she asked him to sign her petition to run for office. She rents a bedroom from the Peñas, he said.

Rodriguez reported seeing Ceballos-Viner’s white Mercedes parked outside the Peñas’ house on several occasions, but only “in the past few months” and after she filed to run. 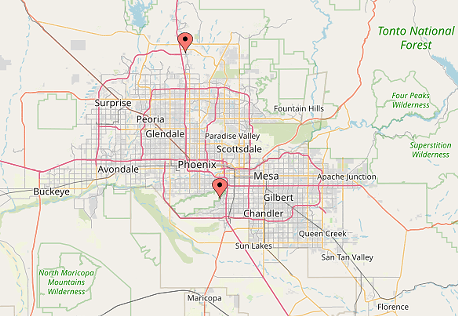 Denise Ceballos-Viner's registered address in South Phoenix is a 45-mile drive from the upscale home she owns in Anthem.
Map Customizer

In Anthem, a neighbor of Ceballos-Viner said he regularly sees the city council candidate at the home.

“I see her sleep here every single night,” he told New Times. He asked not to be named, citing a fear of retaliation by police or Viner, who has commanded the Black Mountain Precinct for nearly three years, according to his LinkedIn profile.

In 2004, Viner was placed on the Brady List, a registry of disgraced cops used by prosecutors to track officers with a history of dishonesty, criminal activity, and other integrity concerns. Those on the Brady List are barred from testifying in court.

According to a disciplinary notice in 1999 from the city of Phoenix’s personnel department, Viner in 1997 “improperly accessed the police computer system” to unlawfully release his ex-girlfriend’s criminal record to his “current girlfriend” at the time. The incident was shortly before he and Ceballos-Viner married.


He also “failed to take proper action” serving a warrant and later lied to his supervisors about an incident with his ex-girlfriend in 1998, according to personnel records. He was suspended for a week without pay.


Ceballos-Viner is running on a hard-line "Back the Blue" agenda. On her campaign website, she says, "Our law enforcement are overworked, understaffed, and attacked by our current councilmember." The city council provides oversight of the Phoenix Police Department and approves its nearly $850 million annual budget.

One of the Viners' three children is also a police officer.


Ceballos-Viner does have a connection to the South Phoenix address. Arizona Corporation Commission records show she registered a limited liability company, Viner for Phoenix, there on the very same day she filed to run for city council: March 2.

It's far from the first corporation she has set up in Phoenix.


Over the past two decades, Ceballos-Viner has founded a slew of mostly short-lived companies and nonprofit organizations out of her home, including multiple dance studios, parental rights groups, Christian ministries, and pro-police organizations. None provide her any compensation, according to a financial disclosure statement she filed in July for her city council campaign. Despite owning a north Phoenix mansion with her police commander husband, Denise Ceballos-Viner claims to live at these cross streets in a low-income South Phoenix neighborhood.
Elias Weiss

Records show Ceballos-Viner was charged with three unspecified misdemeanors between 2003 and 2011. In 2004, judges in Peoria, Tolleson, and three different Phoenix courts slapped Ceballos-Viner with seven civil judgments against her totaling more than $10,000.


Six years later, she and her husband filed for Chapter 7 bankruptcy in United States Bankruptcy Court in Phoenix. They owed more than $1.75 million, according to the bankruptcy filing.


The documents paint a picture of a family mired in civil judgments with expenses outstripping their income after the Great Recession, which ended in 2009.

Viner, a police lieutenant with a $122,000 salary at the time of the 2010 bankruptcy filing, and Ceballos-Viner, who listed a monthly income of $1,000 from her businesses and $1,000 in Social Security benefits, lived in a north Phoenix mansion and had two luxury cars. Coupled with loans owed to Phoenix-based Speedy Cash and other high-interest lenders, the Viners owed millions.

Concern About Where Ceballos-Viner Lives

Ceballos-Viner has raised $3,900 for her campaign, including a $1,000 injection from failed U.S. Senate candidate and election denier Jim Lamon, according to records.

Ceballos-Viner is a pro-Trump, anti-Planned Parenthood conservative who hangs out with alt-right gubernatorial candidate Kari Lake and endorsed QAnon-affiliated Tempe Republican Jerone Davison's futile bid for Congress. She's among a field of five candidates gunning to unseat Garcia, a Democrat.


“I’m committed to the district and the projects we have,” Garcia told New Times. “Folks like Denise will do whatever it takes to stop the progress that we made in the last three years. I hope our city clerk does the right thing.”

But the city clerk's job is done.


“Any challenges related to nomination and/or candidate qualifications are handled through the courts,” said Blake, the clerk’s office spokesperson.


That’s what happened in early August when another Phoenix City Council candidate in District 6, Kevin Robinson, admitted to renting a house in Ahwatukee so he would be eligible to run there. Robinson’s opponent in the race, Moses Sanchez, challenged his eligibility in court.


Sanchez’s attorney, Jack Wilenchik, argued in court that a person’s residence is defined in the city code as being where the person’s family resides.


A judge ruled that Robinson could stay on the ballot and Sanchez is appealing the decision. In his decision, Maricopa County Superior Court Judge M. Scott McCoy cited Robinson's longtime work in District 6. Robinson also testified in court that he is shopping for a permanent home in Arcadia and plans to relocate quickly.


Ceballos-Viner has made no such public promise.


Ceballos-Viner’s plan is to “save the community," according to her campaign website. The question is whether or not it’s her community to save.