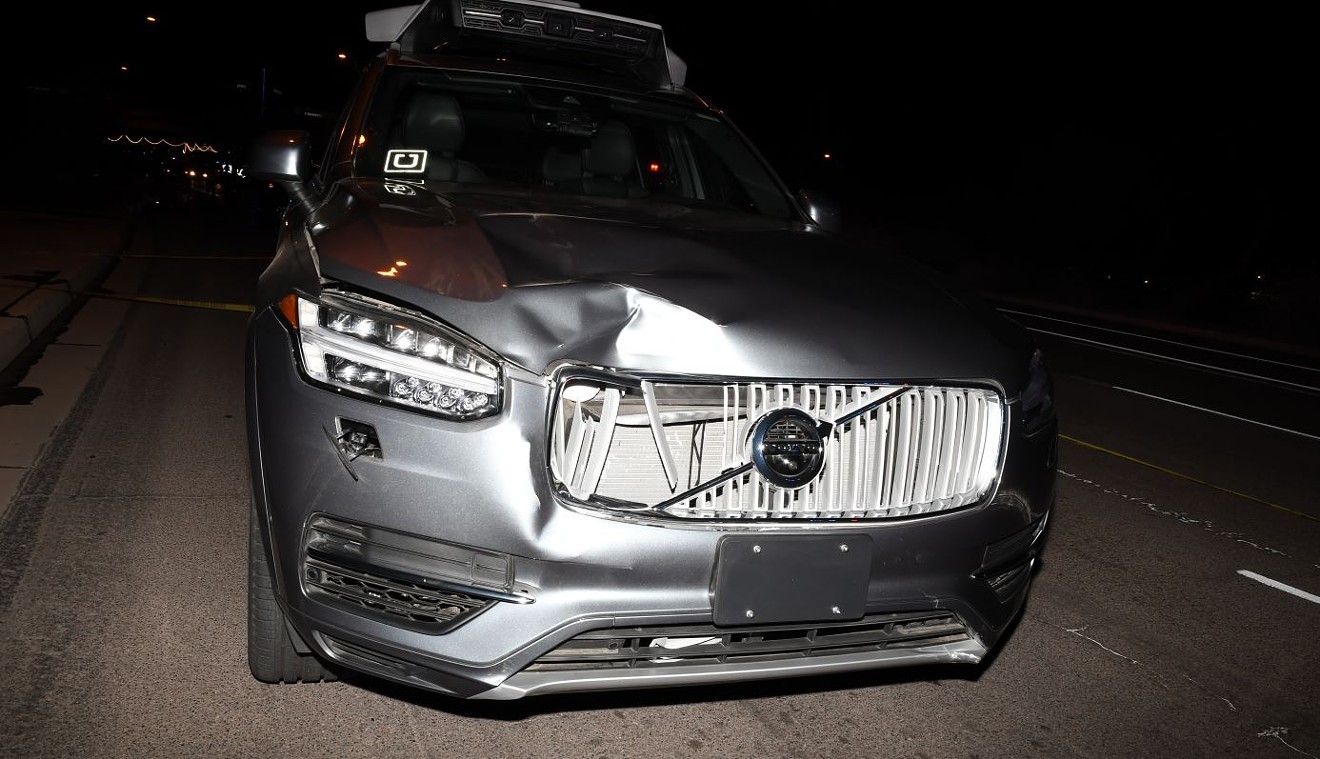 The Uber self-driving car after its impact with pedestrian Elaine Herzberg on March 18. Tempe Police
The backup driver in an autonomous Uber vehicle was distracted, and a Hulu video was playing on her phone,  before the car struck and killed a pedestrian in Tempe, police determined.

The driver, Rafaela Vasquez, is being investigated for a possible manslaughter charge, according to a much-anticipated Tempe police report and search warrant returns released late on Thursday evening.

Vasquez, 44, one of many Arizonans Uber hired for its self-driving car testing program, was supposed to focus on the road ahead because the vehicles aren't ready to perform autonomously. 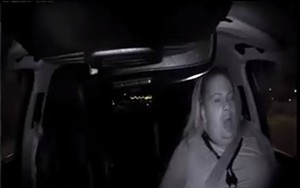 Rafaela Vasquez is captured before or at impact.
Tempe Police
The Volvo XC90 was in self-driving mode when it slammed into Elaine Herzberg on Mill Avenue south of Curry Road just before 10 p.m. The woman had been walking her bike in the dark across the two-lane road, far from a crosswalk, and was hit just before she made it to the sidewalk.

As police previously said, the car showed no evidence of braking before hitting Herzberg.

Vasquez told police after the crash that her personal and work phones were in the car, but she hadn't been using them.

A search warrant obtained by Tempe police show her personal phone was streaming an episode of The Voice on Hulu until one minute before 10 p.m., the approximate moment of the crash, the new report shows.

Tempe investigators conducted lighting and road tests to determine whether an average motorist should have seen Elaine Herzberg walking across.

Because she was so distracted, Vasquez missed the chance to see Herzberg and take evasive action, investigators concluded.

In simulating conditions of the crash and consulting their textbooks, detectives found that Herzberg could have been seen 143 feet down the road by 85 percent of motorists. The Volvo was traveling at about 40 mph in the lane nearest the curb and never braked. If Vasquez had braked, she would have given Herzberg an extra .57 seconds of time to cross in front of the vehicle. Police further determined that in that half-second, Herzberg would have walked an extra 2.64 feet. She would have only needed 2.1 feet to make it past the Volvo.

"For this reason, the crash was deemed avoidable," the report states.

The Volvo's internal video shows Vasquez repeatedly looking down below the dashboard as the vehicle speeds along, as observers noticed when the video was released in March. Tempe police noted that Vasquez "smirked" at what she was looking at. She was looking down for 5.2 seconds of the 5.7 seconds she could have been braking, police determined.

In fact, the investigation revealed, Vasquez was looking down for 31 percent of the 21 minutes and 48 seconds before the crash, the report states.

Although Herzberg was not in a crosswalk, Vasquez was inattentive, distracted, failed to take control of the vehicle, and disregarded her job duties, police wrote, saying the case was being submitted for possible charges.

Tempe police submitted their report to the Maricopa County Attorney's Office last month, but Thursday's release was the first indication that Vasquez was being investigated for a crime. Police told a judge in their search warrant request that probable cause existed that Vasquez had committed manslaughter.

County Attorney Bill Montgomery had the case transferred to the Yavapai County Attorney's Office to avoid any conflicts of interest. The incident remains under review, and prosecutors haven't yet made a decision.

Tempe police spokesman Sergeant Ronald Elcock said the department isn't commenting on the report yet. Asked about the many pages that were blacked-out in the report, Elcock said they mostly consisted of medical records, license plates, addresses and dates of birth.

A federal report released last month showed that the Uber vehicle was equipped with radar, lidar, navigation sensors, a computer, and 10 cameras. The Volvo came to Uber with a collision avoidance system that automatically brakes in emergencies, but Uber's vehicles are programmed to turn off that system when the car is in autonomous mode.

As Uber told Phoenix New Times last month, and as the new Tempe police report states, Vasquez had been trained on the capabilities and limitations of the vehicle. Her job was to look at the road and prepare for any emergencies, Uber confirmed. The new report says Vasquez told police she'd been driving without her hands on the wheel, or feet on the pedals.

Uber voluntarily packed up its self-driving cars and left the state last month. Before that happened, Governor Doug Ducey, who had lured the company to Arizona with promises of lax regulation, banned Uber's self-driving cars from the road after the crash.

Waymo, a Google-affiliated company, and other self-driving car companies continue to test on Arizona roads.