College Student or Not, This Tempe Business Will Pay You to Poop for Science GoodNature, the stool collection arm of Seres Therapeutics, is opening a Tempe, Arizona location. Kristen Mosbrucker
Don't be surprised to see advertisements on the way to Trader Joe's in Tempe for a business trying to pay people to poop for science's sake.

GoodNature, a subsidiary of biotechnology company Seres Therapeutics, hails from Massachusetts and has opened a clinical research retail arm in Tempe.

Headquartered in Cambridge, the late-clinical stage biotechnology company specializes in microbiome therapeutics. A microbiome is a community of micro-organisms which in this case means living inside humans, while therapeutics refers to the healing of a disease.

While the new center is within walking distance of Arizona State University's main campus and a five-minute drive away, it's not required to be enrolled in college to get paid to contribute your stool which is technically being donated.

Eligible donors could earn at least $25 and up to $75 for their toilet efforts and no more than $1,200 a month for the quirky side gig. 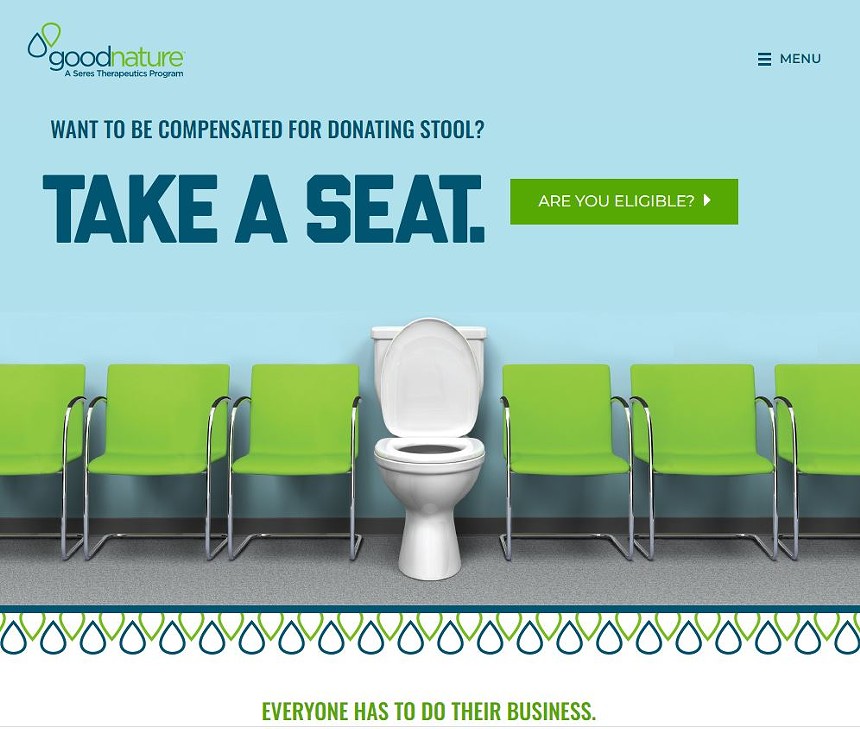 The new Tempe location is GoodNature’s third facility. The other two are in Cambridge and Irvine, California.
GoodNature Website

It was not immediately clear whether the business, which opens on March 17, is trying to compete with the plasma and blood donation banks which regularly offer visitors cash in exchange for their own bodily fluids.

In theory, hawking your healthy biological specimens can buy a beer keg for St. Patrick's Day for those looking to make some extra cash.

Party alongside the Tempe Chamber of Commerce today between 11 a.m. and 2 p.m. for the full effect ribbon cutting at Suite 207 inside the 725 South Rural Road location.

“Tempe was primarily determined because of the local demographics. Our donors tend to skew younger, but I want to emphasize it’s a high millennial population, and because Tempe has that kind of population, we were drawn to you,” said Jennie Starr, spokesperson for Seres Therapeutics.

The program screens for donors 18 to 50 years old, of normal weight, who do not smoke, and who do not have a history of gastrointestinal disease, including lactose intolerance. The company also excludes donors with a history of alcohol or drug abuse.

Will there be a line for the company's bathroom this week? We'll see how healthy individuals passing by might react.

“I don’t care, I’ll poop for somebody. It would be weird, but I mean, if they’re paying, they can have my poop. I mean, I don’t want it,” said Jeff Hazeltime, an ASU student.

To donate, applicants should first fill out GoodNature’s questionnaire. If the applicant meets initial screening requirements, they will then have a phone screening. If approved, donors will make an appointment to provide three sample donations for GoodNature to test. Donations must be made onsite.

Keep those doggie bags at home, only human stool is permitted.

“We actually cannot take more than one donation a day but we encourage our donors to become regulars. Ideally, a donor would come at least three times weekly, and we encourage them to come as often as we are open," Starr said. "In Tempe, that would mean Friday through Tuesday. We’ll be open five days a week, and we picked those days intentionally. We really want this to be convenient. We are open before work, we’re open for lunch hours and weekends to make that donation as easy as possible."

Such a mission could drawn some clients to donate.

“If it’s for a noble cause to cure a disease or something, yeah. I mean the money’s great, sure, of course, I won’t say no," said Mohammed Ghamdi, an ASU student. "But if I know that the company is doing it for a good reason, that might make me want to go with it more."

Seres being a “late-clinical stage” company might make it sound like it treats illnesses in their later stages, but that is not the case.

“When Seres says we are at a late-clinical stage, it means we are working towards a potential [U.S. Food and Drug Administration] approval for this investigational microbiome therapeutic, which is designed to reduce the occurrence of the C. diff infection,” Starr, the company spokesperson said.

The new Tempe location is GoodNature’s third facility. The other two are in Cambridge and Irvine, California.

For those on the wall about donating stool, the words of President John F. Kennedy may be of counsel. Ask not what your country can do for you, ask what you can doo for your country.

Instead of popping into Trader Joe's to use the gender-neutral bathroom on the way to class students might opt to visit GoodNature instead.
KEEP PHOENIX NEW TIMES FREE... Since we started Phoenix New Times, it has been defined as the free, independent voice of Phoenix, and we'd like to keep it that way. With local media under siege, it's more important than ever for us to rally support behind funding our local journalism. You can help by participating in our "I Support" program, allowing us to keep offering readers access to our incisive coverage of local news, food and culture with no paywalls.
Make a one-time donation today for as little as $1.