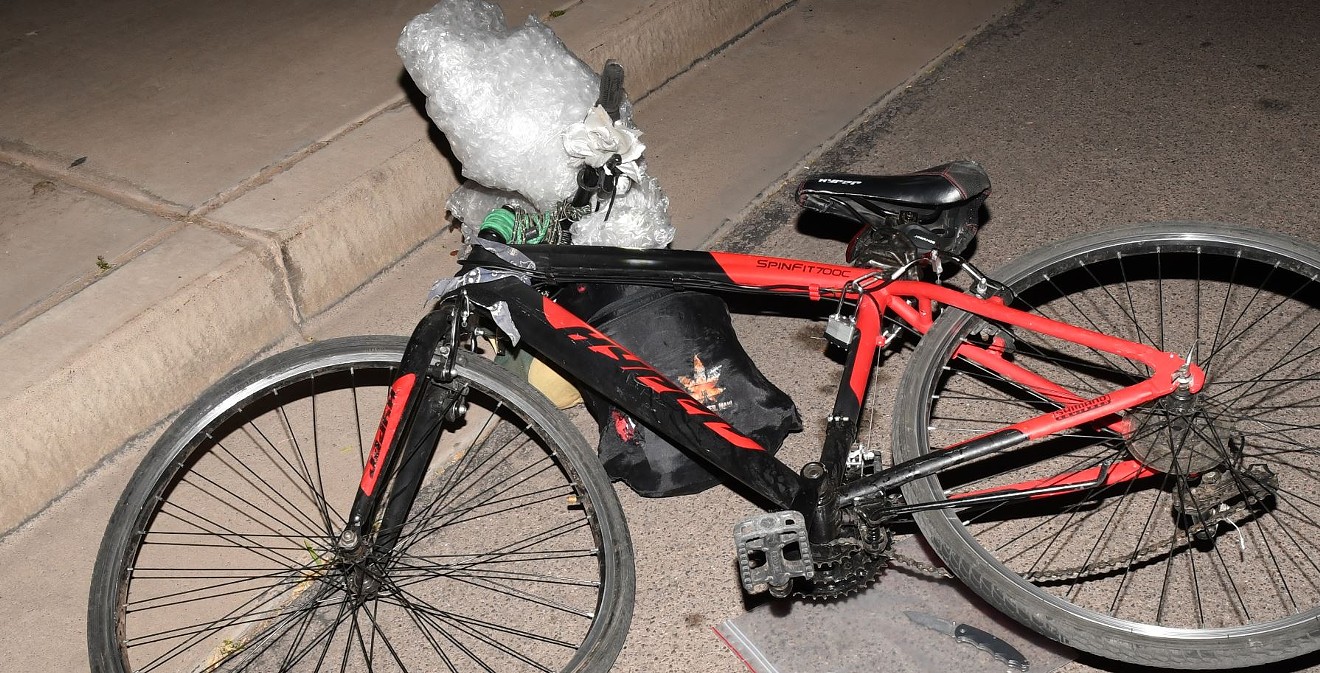 Elaine Herzberg's bicycle following her fatal impact with a Uber self-driving vehicle on March 18. Tempe Police
Tempe Police Chief Sylvia Moir said she regrets how statements she made about the fatal self-driving Uber crash in March became part of the story and took attention away from the tragedy.

Moir's assertion to two newspapers that the Uber crash was "unavoidable" made international headlines and created an early impression for the public in a high-profile case that later proved incorrect, critics say. She also has been criticized in a much lower-profile case for comments she made about her predecessor to a potential employer.

Last month, Tempe police investigators released their findings that the crash was "entirely avoidable." Although pedestrian Elaine Herzberg had been crossing Mill Avenue outside of a crosswalk, police believe Uber driver Rafaela Vasquez was watching TV on her phone instead of performing her duty as backup for the vehicle's experimental autonomous driving system.

Moir stopped short of saying she was sorry for making the incorrect assertion, or that she should not have said it.

"My regret is this has been a distraction from the tragedy on both sides," she said in an interview with Phoenix New Times. "It bothers me."

Critics say her statements embarrassed the department and eroded the public's trust.

One of those critics, a local lawyer helping Tempe's former police chief, Tom Ryff, sue the city for $1 million in a separate case, said that in both the case he's handling and the Uber statements, Moir has shown professional "immaturity."

In hindsight, Moir's decisions in both the Uber and former police chief's cases don't appear to be good ones.

On March 19, the day after the fatal Uber crash, Moir shared her opinions about the crash in exclusive interviews to the San Francisco Chronicle and Arizona Republic. Yet her department's investigation had only just begun.

Based on exterior videos from the Uber car involved in the crash, Moir told reporter Carolyn Said, "It's very clear it would have been difficult to avoid this collision in any kind of mode (autonomous or human-driven) based on how she came from the shadows right into the roadway."

She acknowledged the "potential" that charges could be sought against Vasquez.

But the day after that, she told the Republic in another exclusive interview that the crash was "unavoidable."

Media outlets all over the world picked up the story of Moir's conclusions. Public interest was high in Uber's possible role in the crash, and whether something went wrong with the autonomous technology.

Besides declaring the crash avoidable, police are seeking a manslaughter charge against Vasquez, who was hired by Uber to watch the road as the experimental car rolled along in autonomous mode.

Vasquez told police her phone was in the car but that she hadn't been using it at the time. A search warrant for cellphone records turned up evidence that her personal phone had been streaming an episode of The Voice up to the minute of the crash. Interior video of the autonomous vehicle showed that Vasquez had been looking below the dashboard at something repeatedly in the moments before the impact.

Moreover, as Phoenix New Times wrote in April, illumination at the crash scene wasn't as bad in reality as the Uber video showed. Any alert driver, going 38 mph like Vasquez was, could have avoided Herzberg.

But Moir said she didn't know if she could have evaded Herzberg at night in a car traveling the same speed.

Moir downplayed the idea that she'd given anyone an "exclusive," even though at the same time the chief gave the comments to the two newspapers, she was declining to return calls to any other news outlets, including New Times. Her recent talk with New Times is the first time she's spoken to a reporter about the Uber crash since the March interviews.

The Chronicle reporter contacted Moir on her personal cellphone, then blew her quotes out of context, the chief said.

"I never answered their phone call again," she said.

Yet Moir agreed she used the word "unavoidable."

"Perhaps I should have worded it differently," she said.

Bill Richardson, a retired Mesa police officer and frequent critic of Tempe police, slammed Moir for her premature observations on the Uber crash in an op-ed in late March that appeared in the Arizona Republic. He feared the statements would lead to "command bias," in which a chief unfairly influences an investigation and steers it to a predetermined result.

In early July, Richardson said he was relieved and proud that Tempe detectives had the courage to defy the chief's conclusion with the evidence they uncovered. He took some credit for their decision, saying that it was possible his widely seen column "added extra scrutiny to the investigation and helped ensure it was above-board."

He suspects politics and a "willingness to jump to a conclusion that benefited the city" played a role in Moir's early conclusion about the video, along with her "lack of experience."

When the department contradicted her, "she had a big chunk of community trust taken away from her," Richardson said.

Tempe officers certainly don't believe that, according to Sergeant Robert Ferraro, president of the Tempe Officers.

Following Richardson's screed, Ferraro had his own "Your Turn" column published, snarking that Richardson has long "delighted in second-guessing his former colleagues on the frontlines."

"These detectives are not kids trying to please mommy and daddy," Ferraro wrote in the column, referring to Richardson's prose. "They are some of Arizona's best investigators, and they follow cases to their conclusion, wherever that conclusion may lead."

He said that when Moir made her comments, "I wasn't concerned about it. ... We were going to do a thorough investigation, and we did."

To many officers, it's ironic and "funny" that Moir was criticized for speaking to the news media, Ferraro said, but would also be criticized by the media for not speaking publicly.

Yet blanket statements about the blame in a potential criminal case, whether they are ultimately proven wrong or right, are not something prosecutors usually like to hear.

Romley came out of retirement this month to help the Mesa Police Department research alleged cases of recent police brutality. He said the Uber crash investigation, in particular, should have been handled delicately because it's a technology-related "case of first of impression" that's likely to have a far-reaching impact on other cases.

Whether Moir's statements to the press could affect a court case is another story. But Romley said it's possible an attorney could argue she was attempting prejudice the jury pool.

That being said, Romley wasn't ready to predict whether Vasquez would be charged. He'd have to take a "deep dive" into the evidence to figure it out, and he'd bring in a team of experts in autonomous technology to give prosecutors a full understanding of the issues involved.

Tempe Police
Stephen Montoya, a civil-rights and employment law attorney, is suing Tempe on behalf of former police chief Tom Ryff. Montoya said that it's "reckless" for law enforcement personnel to make public statements about someone's guilt or innocence, and not how police work is supposed to be done.

Montoya said it was "remiss" of Moir to make the statements about the Uber crash.

"I hope she's learned a lesson," he said. "It's not a huge fault, but it is embarrassing."

The Ryff lawsuit is a much more troublesome situation, according to Montoya.

Ryff retired in 2015 after 37 years with Tempe police.

Moir was later hired to replace him. She's a California transplant and former chief of police in El Cerrito, a small town in northern California with less than a tenth the number of police officers. She started her job for Tempe in March 2016.

In late 2017, Moir received a phone call from Kenneth Baca, Tempe Union High School District superintendent, asking about Ryff. Baca wanted to hire him for a $109,000-a-year job as the district's executive director of student affairs and district safety.

Ryff's retirement with the city had included a contract deal that banned the city from making any disparaging comments about the former chief.

But Moir told Baca the department would be "uncomfortable" working with Ryff in the district position, the lawsuit states. She also told Baca that hiring Ryff to the position would not gibe with the department's goals, and that other people in the city agreed that the district's hiring of Ryff would not be a "positive development," the suit states.

It's unclear at this time whether Moir knew about the non-disparagement clause in Ryff's contract, Montoya said.

However, city officials should have told Moir that the former chief's contract had the clause, he said. Further, as any professional should know these days, it's inappropriate to dish on an ex-employee to a prospective employer.

Montoya said the standard advice employment attorneys give to employers who are clients is that when someone calls looking for a reference on a past employee, the only information given – to avoid legal trouble – should be the person's title and dates of employment.

Moir and Tempe police declined to comment about the Ryff case, citing the pending lawsuit.
KEEP PHOENIX NEW TIMES FREE... Since we started Phoenix New Times, it has been defined as the free, independent voice of Phoenix, and we'd like to keep it that way. With local media under siege, it's more important than ever for us to rally support behind funding our local journalism. You can help by participating in our "I Support" program, allowing us to keep offering readers access to our incisive coverage of local news, food and culture with no paywalls.
Make a one-time donation today for as little as $1.