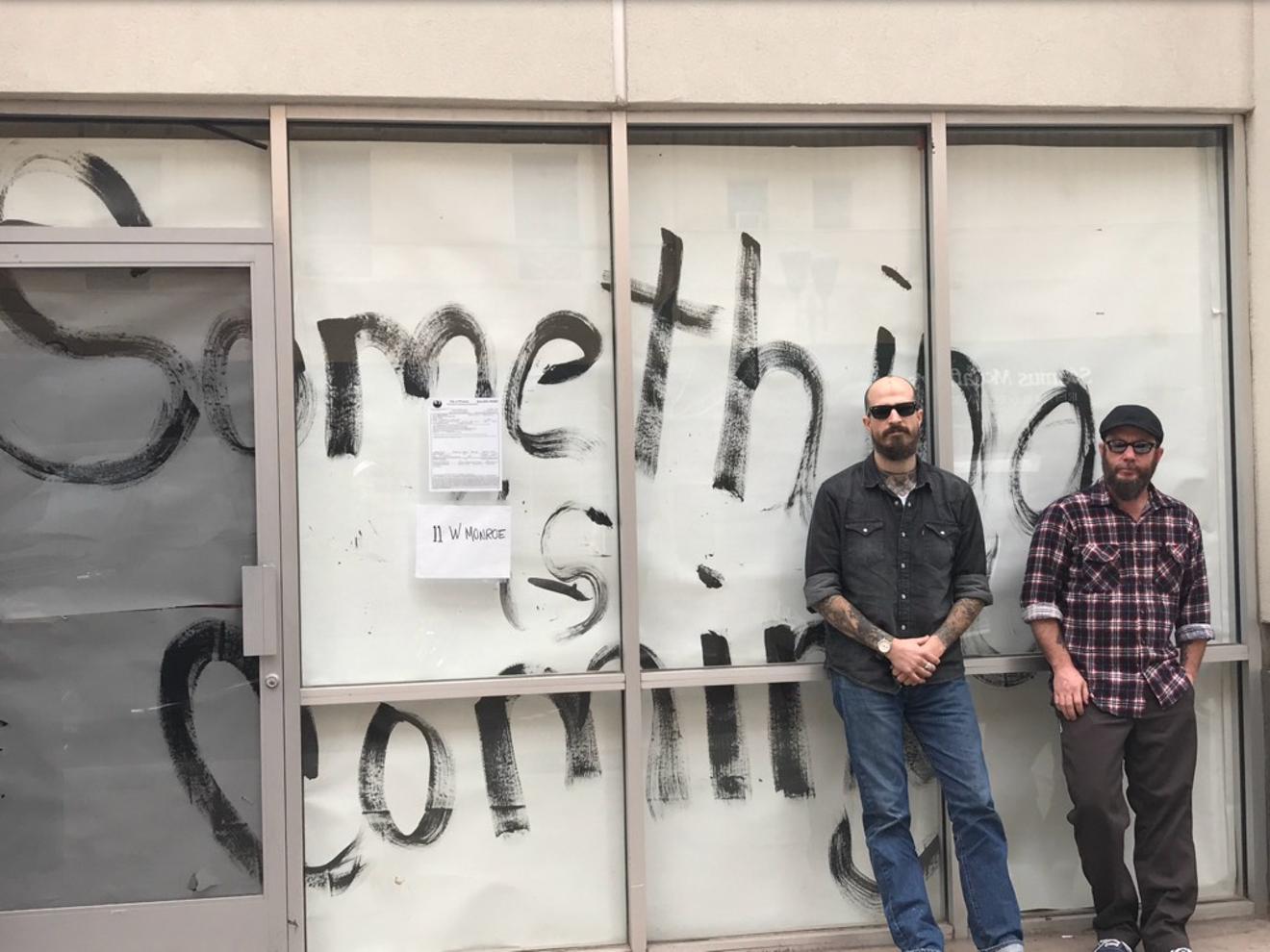 Ospina, a singer-songwriter and guitar-strummer who also answers to the handle “Oz,” wore the Hells Angels cut from 2010 to 2014. During a recent interview at a local restaurant, he recalled the first time he played for a member of the Phoenix charter, a badass biker who chews tire irons for breakfast.

“It was two o'clock in the morning, hanging out, and I said, 'Hey, dude you wanna hear a song I wrote?’” remembered the tall, lean 36-year-old.

Incongruous as this may seem, Ospina told me that there’s no shame in showing emotion in the outlaw motorcycle club, whose members are better known for their run-ins with the law and for being the alpha males of the biker world.

“Some of my best friends are still in the club,” he told me. “I play for them and they're moved by it … When you’re in there and you’re part of that, nobody judges you, because it's honest.”
In fact, Ospina said HA members have been very supportive of his transition to full-fledged artist and even helped pay for the production of his debut album, Memories Remain, with his collaborator Jeff Bottomley.

The two men are the primary members of the band The Inward Morning, which has two gigs in downtown Phoenix this week: tonight at 9:30 p.m. at Chambers on First, and Saturday, March 25, at 7 p.m., at the Phoenix Center for the Arts.

Tattooed, bald, and bearded, Ospina is not as beefy as some other HA members. Still, you would not want to meet him in a dark alley, or any alley, for that matter.

And yet, the music he makes with Bottomley sounds like soulful country, with lyrics offering bittersweet tales of heartache and romance. His voice is reminiscent of early Bruce Springsteen or John Mellencamp.

The tunes, all written by Ospina, are as unexpected for an ex-HA member as the name of the band itself, borrowed from a poem by one of Ospina’s favorite authors, Henry David Thoreau.

One lyric from the song "Silver and Gold" applies to Ospina: “Don’t show everyone everything.”

Ospina doesn’t. His songs don’t directly reflect his time in HA or his life before that, when he was a U.S. Marine Corps scout sniper in Iraq, going out in advance of a battalion in teams of two or four, and picking off enemy combatants one by one with an M40A3 7.32 millimeter rifle.

“We gather information, do surveillance on targets,” he explained stoically. “And if necessary, we take that target down.”

Later, he served as an instructor at Marine Corps Base Quantico in Virginia. After leaving the Marines, like many highly skilled ex-military, Ospina was lured by the money into private contracting overseas, where he would be hired to protect rich businessmen or engineers working in Iraq and elsewhere.
“It was fucking dirty,” he said of the work, which he did for a couple of years. “I didn’t see a lot of honor in it.”

After being injured, he struggled with PTSD and began to question the Iraq War. He says he will always be proud of his time in the Marine Corps, and that he went to Iraq when others did not.

But after reading a lot — Noam Chomsky and other such authors — he started to see a bigger picture.

On disability and not in the frame of mind to tackle a 9-to-5 job or school, he was drawn to HA, which he saw as having many of the same elements as the military: camaraderie, operating as a unit, a uniform, and a code of having your brother’s back.

In HA, he was among like-minded individuals, where being a badass or a “monster,” as some say of the hardest HA members, was the coin of the realm.

“It’s like being with your platoon again,” he stated. “I found solace in it. But like anything else, it runs its course. And as you grow as a person; sometimes, what you’re doing and what you want to be are two different things.”

While still in the club, he was almost killed by a motorcycle accident in California, when a semi-truck ran over him and his bike, snapping a bone in one leg. Averse to opioids, he turned to marijuana to manage the pain. He credits pot with helping him to open his mind and feel empathy for others.

“I felt connected to human beings,” he said. “I suddenly realized that human beings had fucking value. Like what, you mean fucking something? You’re not just a fucking hunk of fat that I can shoot through. It was a really eye-opening experience for me.”

Living in a remote area of northeastern Arizona, he grew his own pot illegally, selling some on the side to make a little cash. In 2015, he was out of state, and friends were watching his trailer. One of them, an older lady, had a heart attack. By the time the police responded to the 911 call, she was dead.

But the cops saw the pot, his trove of firearms, and as the folks at his house were HA-connected, it turned into a shitshow, with the Apache County Sheriff’s Office and the state gang task force getting a warrant to search his residence and confiscate his guns and his weed.

While in jail, Ospina said the FBI tried to pressure him into becoming an informant, threatening him with a federal weapons charge that could have put him behind bars for decades. But the bureau was bluffing, and when Ospina refused their offer, the state picked up the case.

He ended up pleading guilty to possession with intent to sell, and misconduct involving weapons. In January 2016, he was sentenced to five years' probation.

I should note that the FBI declined comment for this article. However, the U.S. Marine Corps confirmed Ospina’s military service as a scout sniper, and HA members that I’ve spoken with have vouched for Ospina, calling him “a good guy.”

“I can never own a gun again,” he said. “That's a huge part of my life. It's like taking a samurai sword away from a samurai and cutting off his ponytail.”

On the flip side, the situation made him focus on his music and getting the album — produced at Tucson’s Wave Lab Recording Studio — out to the public.

Which is why he found inspiration in the Thoreau poem, the namesake of his band.

“It’s about the waking up of what’s inside you,” Ospina said. “So nothing could describe [the band] better than The Inward Morning. This is my sunrise, my chance to share."