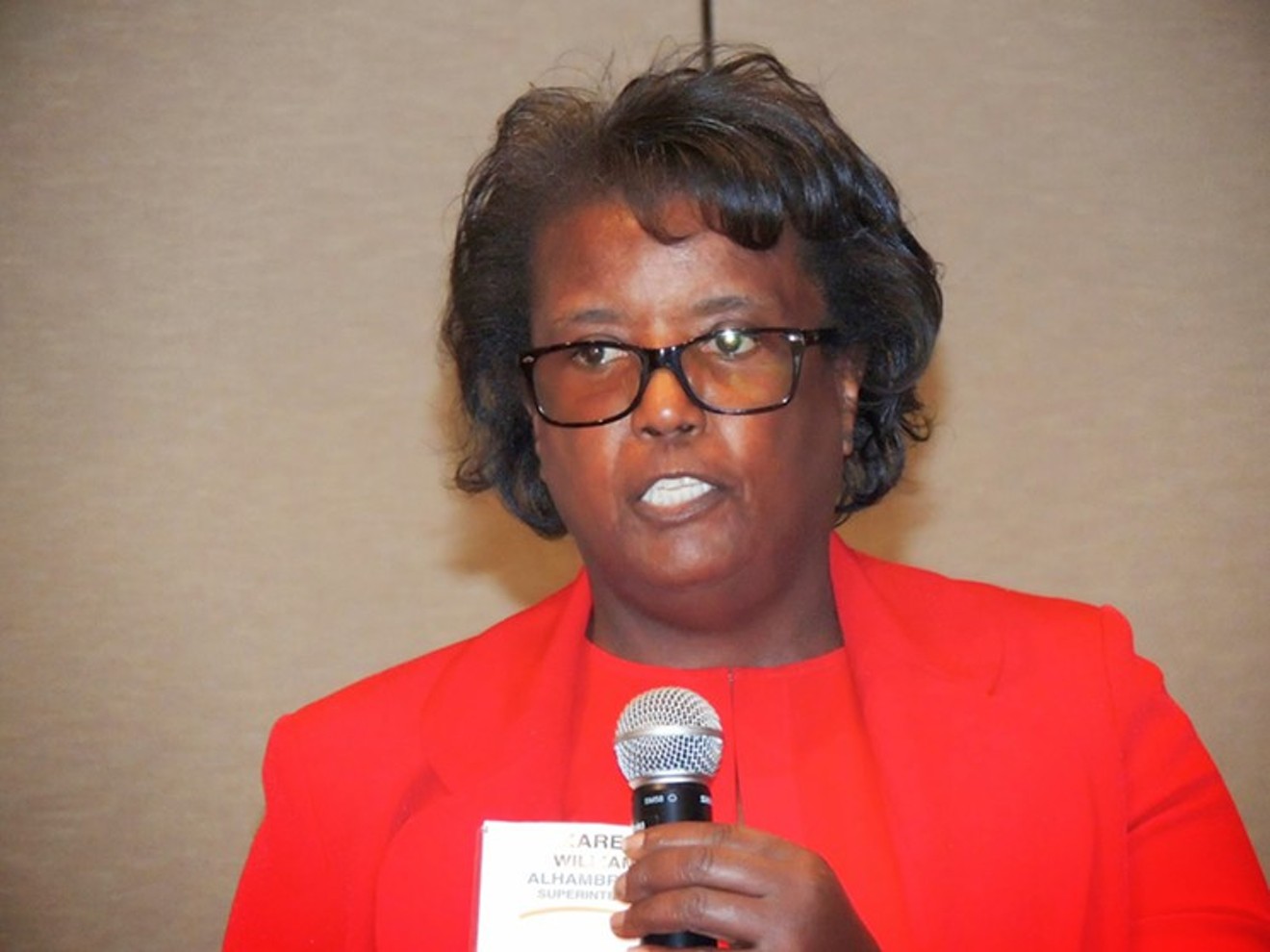 Former Alhambra school district superintendent Karen Williams Arizona School Boards Association
A federal jury ruled in June that an Alhambra Elementary School District board member discriminated against a  black superintendent because she is not Hispanic.

Karen Williams alleged in a federal lawsuit that three former Alhambra School District board members conspired to drive her out of her position in favor of someone who would "reflect the predominately Latino community demographic."

After Williams served as superintendent for about five years, the board voted not to renew her contract and hired an Hispanic man, Mark Yslas, as her replacement.

"Dr. Williams courageously pursued this lawsuit for over three years and is pleased with the jury's finding that race discrimination and retaliation is intolerable," said Michael Zoldan, one of Williams' attorneys, in a statement. "She remains optimistic that Alhambra, as well as all Arizona school districts, will take notice of this verdict and make appropriate changes to eliminate discrimination in the workplace."

Following a three-week trial in the U.S. District Court of Arizona, a jury found one of those former school board members — former Democratic State Representative Ray Martinez — liable on two counts of racial discrimination against Williams.

The jury also found that the Alhambra School District retaliated against Williams for opposing unlawful practices, according to a copy of the verdict filed on June 6.

Martinez denied the jury's findings, saying he voted to oust Williams because he felt she was getting paid too much despite declining student achievement in the district. He noted that schools in the district had received lower grades from the state during Williams' tenure.

"I just want to make it clear I'm not racist," Martinez said in a phone interview. "I did what was best for the kids in the neighborhood." He declined to comment on whether he plans to appeal the verdict.

The jury awarded Williams $198,763 in compensatory damages, equivalent to what her salary would have been if the board renewed her contract in 2015. The district is responsible for paying the compensatory damages. However, Martinez could be liable for $5,000 in punitive damages.

The jury found the other two former board members named in Williams' lawsuit — Robert Zamora and Mari Alvarado — not liable on any counts of discrimination.

Alhambra Elementary School District No. 68, situated in Phoenix and Glendale, comprises 14 schools and serves more than 13,500 students from preschool through eighth grade. Williams was hired by the school board as district superintendent in July 2010 with a base salary of $151,000.

According to her 2016 lawsuit, Williams said that shortly after her hiring, Zamora approached her and said he believed staff, particularly two assistant superintendent positions, should reflect the district's predominately Hispanic population. Williams said she responded that she would hire the most qualified candidates for all positions, regardless of race.

In July 2012, the board renewed Williams' contract for an annual salary of $185,000, plus raises commensurate with the average percentage increases on the teacher salary schedule. In 2013, Zamora was elected school board president.

That year, according to Williams, another school board member approached her and "informed her that [Zamora] intended to end Williams' career at Alhambra because she did not reflect the Latino racial demographic of the community." The board member also told Williams that Zamora was after her job because she did not support the Alhambra District Education Association, which at the time had not yet achieved union recognition.

Williams filed two complaints in 2013. One complaint, filed with the school district's attorney, related to Zamora's alleged statements. Another complaint, filed in December 2013 with the board, rejected an initiative to hire "consistent with community demographics."

The June jury verdict found that the Alhambra School District retaliated against Williams for filing complaints by electing not to renew her contract.

In 2015, after Ray Martinez was elected to the Alhambra School Board, the district offered Williams a one-year extension to her contract with a base salary of $195,763. Williams accepted the offer.

Then, things started to go downhill. Attorneys for Williams requested a tweak to the contract that would allow her to be officially "retired" from the district while working through a third-party employment agency. The board rejected Williams' new contract on February 19, 2015, with Martinez as the deciding vote.

Six months later, the board chose Mark Yslas, an Hispanic man, from a list of four candidates as the district's new superintendent. The other candidates were two Caucasians and an African-American.

As evidence that race was a factor in her termination, Williams pointed to a statement made by Martinez at a public community luncheon in late January or early February 2015 calling on the board to do more to hire Hispanic staff.

In his interview with Phoenix New Times, Martinez rejected the notion that race played a role in his decision to vote against Williams' contract. "I never advocated for a Latino. I advocated for change," he said. "It doesn't matter what your race is."

He stressed his ties to the community, noting that all his children went to school in the district. Martinez, who served one term in the Arizona House of Representative, also said that he was hired by an African-American man many years ago for his job with the Department of Corrections.
KEEP PHOENIX NEW TIMES FREE... Since we started Phoenix New Times, it has been defined as the free, independent voice of Phoenix, and we'd like to keep it that way. With local media under siege, it's more important than ever for us to rally support behind funding our local journalism. You can help by participating in our "I Support" program, allowing us to keep offering readers access to our incisive coverage of local news, food and culture with no paywalls.
Make a one-time donation today for as little as $1.
Steven Hsieh was a staff writer for Phoenix New Times from August 2018 to April 2020.
Contact: Steven Hsieh
Follow:
Twitter: @stevenjhsieh