Your Handy Guide to a Few Great Mexican Cheeses Then what was that stuff in my enchilada at Barrio Cafe? And what was melted on my heritage grain quesadilla at Roland's? And I know I’ve seen queso fresco at Fry’s before. Wasn’t that all Mexican cheese?

“Nope," Yescas says. "What you can find, though, is Mexican-style cheese, made in the U.S."

The FDA doesn't allow cheese made in Mexico to enter the U.S. for a few reasons:

• Any cheese, regardless of origin, must be pasteurized if younger than 60 days, and many Mexican cheeses this young are unpasteurized.
• There’s less advocacy for Mexican cheeses than for, say, European cheeses. This means we tend to hear only negative news, like when people bring suitcases of cheese over the border without refrigeration, and then they make someone sick.
• Once you account for transport and import costs, true Mexican cheese would be pricey – if allowed in in the first place. Some cheeses at Ranch Market.
Chris Malloy
When we think of terroir, or taste of place, we usually think of something like Champagne. Any wine snob will tell you that champagne can only be made in the Champagne region of France, because the French say so, yes, but also because growing those same grapes and making them into sparkling wine anywhere else won’t result in the same wine (though it may still be delicious).

That said, the cheeses of Mexico may soon be getting their due. “You’re the 16th person to contact me about this in the past three months,” Yescas says with a grin.

Read on for four traditional Mexican cheeses beyond queso fresco that you can find versions of at the right nearby grocery store, restaurant, or Mexican market. 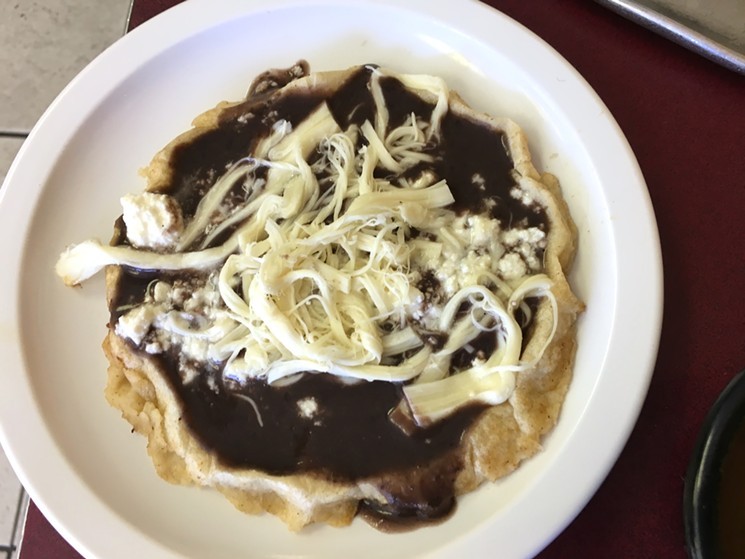 A memela topped with lots of queso Oaxaca.
Chris Malloy
Oaxaca
The most popular cheese in Mexico is quesillo de hebra, or what we know as queso Oaxaca (you also may have seen it as queso Asadero). Introduced to Mexico by Italian immigrants, this cheese is made similarly to mozzarella, by pulling and stretching the warm cheese curd. Much like mozzarella, Oaxaca is tangy, bouncy, and used for melting. Shred it and use it for quesadillas, or snack on it like string cheese. We love it on the signature Taco Chiwas at Tacos Chiwas.

Panela
Another high-moisture cheese, panela is sweet, salty, and fresh, unless it’s panela oreada, which is aged further, developing a sharper, meatier bite. We won’t blame you if you want to snack on it (especially the fresh stuff), but it’s traditionally used for tortas or stuffing chilies. In Mexico, you may find it sold as queso de canasta or “basket cheese,” referring to the basket the cheese is drained in. While no one quite knows the origin of panela, most regions of Mexico have a version. Tortas Paquime uses it on its delightful Torta Hawaiiana.

Chihuahua
Chihuaha, which you may also find as queso menonita, is another excellent melting cheese. When the Dutch and German Mennonites settled in Chihuahua in the early 1920s, they introduced this cheese to the area, hence the name “menonita.” Younger versions are buttery and springy, and aged versions become brittle and tangy. Chihuahua is known for its use in queso fundido. You can use it the same way you’d use cheddar or Monterey jack – melt it, put it on a sandwich, or snack on it with your favorite cracker. Enjoy it on the Quesadilla Roja con Chicharron at Presidio Cocina Mexicana.

Cotija
Originally, Cotija was made like the great mountain cheeses of Europe, like Gruyere or Comte – by moving cows in the summer to graze on the lush mountain pastures, making the cheese on the mountains, and then bringing it back down to the town of Cotija to age, and grow a thick rind. If you go to Mexico, you may encounter pale yellow Cotija de Origin, which is still made the old way, down to curing the cheese with famed salt from Colima. What’s more commonly called cotija, though, both throughout Mexico and in the United States, is a hard, white, rindless cheese, much more similar in flavor to the stuff that you’d shake out of a green can onto pasta. Use it similarly – crumble or grate it onto beans, tacos, soup, or whatever needs a salty boost of flavor. Try it on the refried beans at El Tlacoyo.
KEEP PHOENIX NEW TIMES FREE... Since we started Phoenix New Times, it has been defined as the free, independent voice of Phoenix, and we'd like to keep it that way. With local media under siege, it's more important than ever for us to rally support behind funding our local journalism. You can help by participating in our "I Support" program, allowing us to keep offering readers access to our incisive coverage of local news, food and culture with no paywalls.
Make a one-time donation today for as little as $1.