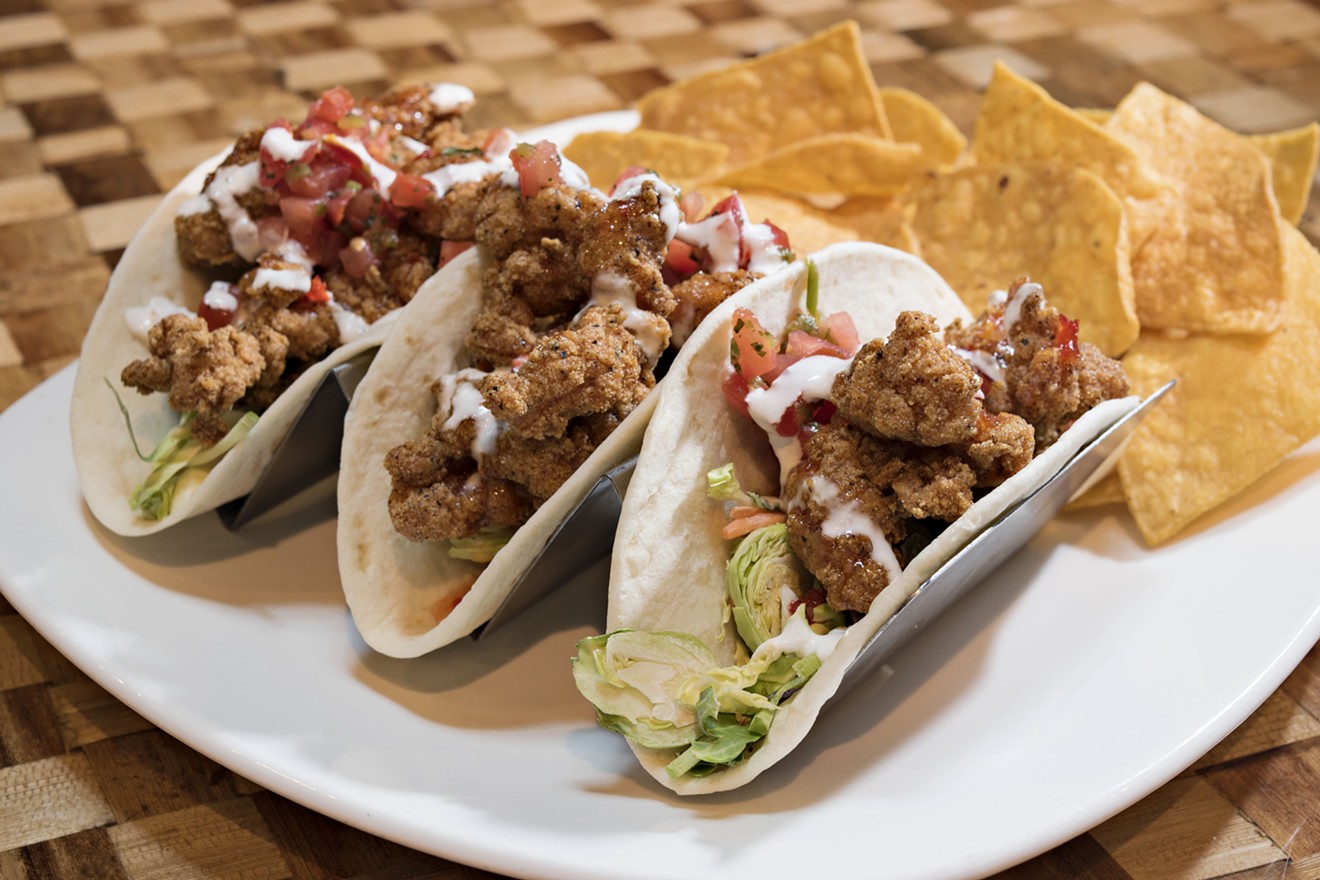 Islamorada (the name means “purple isle” in Spanish) got its start as a humble marina snack shop in the Florida Keys in the 1940s. There are currently fewer than 20 locations of the restaurant in the country, including its flagship location in Islamorada, Florida, which is still in operation.

Bass Pro Shop opened its first (and currently only) Arizona location at Mesa’s sprawling, open-air Riverview shopping district in 2007, bringing with it this curious behemoth of a restaurant, which is tucked into a low-visibility corner.

From the outside, Islamorada resembles a grand sportsman’s lodge, complete with log-cabin siding, an impressive wraparound patio, and whimsical decor at every turn. The entrance is flanked by oversize, ornamental fishing net floats, and there’s a large sculpture of a giant fish reeling in a hapless tourist, who is hung upside down like the catch of the day.

Inside, the restaurant and bar play up the sport-fisherman theme in even more dramatic fashion: decorative manta rays and swordfish hang from the rafters; black-and-white photographs of fishermen, vintage boats, and adventurers of all stripes cover the walls; and plenty of dim mood lighting and decorative palm trees are meant to evoke tropical island life.

The centerpiece of the restaurant, though, is a 13,000-gallon aquarium tank behind the restaurant’s bar, which is stocked with a bright array of tropical fish. The aquarium tank is bright and hypnotic; this is surely the only bar in town where the happy-hour crowd is more transfixed by schools of fish than by whatever happens to be flashing across the bar’s TV screens.

Service at Islamorada is friendly, breezy, and fast. Somebody whisks a drink menu to the table, along with a complimentary loaf of Bimini bread. The soft white bread, which has its roots in the Bahamian island of the same name, is baked in-house, and it has a lovely, yeasty tenderness and honey-like sweetness.

Apart from the copious plastic fish on the walls, the most obviously kitschy thing about Islamorada is its signature house cocktail, the Ducks Unlimited, a neon-blue, sweet-sour, vodka-gin concoction that’s served in a fishbowl for two. Lovers of novelty cocktails will get a kick out of the sugary drink, which is named after a wetlands conservation non-profit group.

For a restaurant that identifies so closely with fishing and island living, the seafood selection at Islamorada is surprisingly limited – your options include Atlantic salmon, shrimp, tilapia, catfish and grouper. There’s also a smaller, separate menu of seasonal seafood specials, along with a stable of chain restaurant staples: pasta, steak, sandwiches and salads.

Islamorado Portofino, alligator tacos, and brisket nachos.
Jackie Mercandetti
Islamorada won’t replace your favorite seafood parlor, then, but it is a solid destination for anyone with a taste for wild game — alligator, venison, and wild boar are on the menu, and they’re rarely more accessible than they are here.

From the appetizer list, you’ll want to try the tenderized, breaded alligator bites, whose flavor lands somewhere between poultry and white fish. The grizzled, crispy nuggets are surprisingly juicy, and nicely punched up the restaurant’s Cajun spice mix.

Mushroom caps stuffed with venison sausage, another popular starter, are swaddled in a rich, cheesy lobster cream sauce. The venison is pleasantly succulent, but its mild, lean flavor is nearly suffocated by the heavy cream sauce.

Mussels might not strike you as particularly exciting, but, prepared here in the classic French Normandy style, they are stellar. The mollusks are seasoned lightly with red pepper, and steamed in a faintly briny, delightfully rich white-wine garlic-butter sauce.

Mussels in the classic French Normandy style
Jackie Mercandetti
Not everything, alas, is this simple and exquisite. From the sandwich menu, I slogged through the World Famous Islamorada Sandwich, a hearty but lackluster fish sandwich featuring a thick fillet of grilled grouper. The mild, sweet flavor of the fish is lost amid a gooey muddle of melted cheese and sauteed onions. A plate of breaded shrimp tacos is notably better — the shrimp, buoyed by a nicely tangy lime crema, are pleasantly crisp and peppery.

One of restaurant’s bestselling entrees is the so-called Islamorada Portofino, a dish of grilled tilapia and blackened shrimp, gilded lightly with a garlicky cream sauce. The dish seems yawn-inducing, but the tilapia is pleasantly flaky, and the shrimp, aggressively seasoned with herbs and pepper, is exceptionally flavorful. Honey sriracha salmon, meanwhile, won’t convert anyone to the ubiquitous fish. But the dish — succulent, buttery, and brimming with sweet-spicy flavor — proves hard to resist.

The best thing I’ve eaten at the Islamorada Fish Company, though, is not even remotely fishy. It’s a savory wild boar burger, bundled with smoked bacon, Swiss cheese, and daubed with sweet aioli. The patty, on a recent visit, had the rich, tender, salty bite of a good sausage.

The wild boar burger represents Islamorada at its best: basic and delicious, with a whiff of novelty to keep your attention. At its worst, though, Islamorada feels on the verge of putting seafood-lovers to sleep with its meager and tame selection of fresh fish.

Still, there’s something undeniably fun about spending time at Islamorada, one of the city’s most unusual and highly embellished theme restaurants.

The interior
Jackie Mercandetti
Islamorada is certainly fun for a quick day trip. Just don’t expect to go on many culinary adventures when you’re on this island.