Situated on the bustling corner of Stapley Drive and Southern Avenue in Mesa is a large building that sports a blue-and-yellow harlequin exterior. A faux-wood sign reads "Organ Stop Pizza."

The name can be a bit confusing. It brings to mind the somewhat grim naming convention of infamous palaces of gluttony such as the Heart Attack Grill in Las Vegas. But Organ Stop Pizza isn't that. It is, quite literally, a place you stop in to hear a talented musician play an organ while you enjoy a nice slice. Jack Barz, who began his career at Organ Stop as a dishwasher before working his way up to buying into the restaurant in 2004, co-owns the unique and historic landmark eatery.

"In the last 50 years, we have had many ups and downs, especially the last couple of years during the pandemic, but when the world feels unpredictable, coming together and hearing music brings people delight and comfort," he says. "We are proud to carry on the pizza-and-pipes tradition and provide escapism for our guests night after night."

Walk through the double-door entrance of Organ Stop and you're immersed in an old-school counter service pizza joint. It's like the local haunt you visited as a child, complete with a small arcade and a souvenir shop. The mouthwatering aroma of baking dough and fried food fills the space as you follow a steady line of couples, birthday partiers, and families to the register. One side of the counter serves up main courses including pizza, plus garlic bread, mozzarella sticks, fried zucchini, fried mushrooms, and other classic, casual Italian fare. The other side dishes out sodas by the pitcher, beer, wine, and ice cream for dessert. After ordering, you hang a right at the end of the counter, and the building suddenly opens into an expansive dining room and concert hall.

The two-tiered room with vaulted ceilings is built like a cathedral to offer the best possible acoustics. Family-style seating is arranged in rows, all centered around a large circular, rotating hydraulic stage. These seats fill up quickly, and the room becomes packed and lively, even at 3:30 p.m. on a Sunday.

Occupying the entire wall behind the stage and scattered throughout the room are pipes, cymbals, cajons, and even a stray piano, all of which are connected to the massive, ornate organ in the center of the display. As the lights dim, a hush falls over the chaotic room, and a stage slowly begins to rotate and rise out of the ground. The two-tiered room with vaulted ceilings is built like a cathedral to offer the best possible acoustics.
Ivan Martinez

The jaunty, sonorous tones of the organ start up, and the whole room comes alive once again. A cacophony of sounds fill the space as the organist pumps out everything from show tunes to Top 40 hits, taking requests from diners on small slips of paper and throwing in the occasional rendition of the restaurant's most played song, "The Chattanooga Choo Choo," complete with a train whistle.

There's "practically nothing" the organists don't know how to play, according to Barz. "You name it and our amazing organists can play it," he says.

As the tunes continue and the audience becomes more animated, colored lights flash, a disco ball rotates overhead casting rays of light, and a bubble maker showers the floor with thousands of bubbles at the organist's command. It's an electric atmosphere mixed with laughter, song, and applause — all while diners enjoy their meals.

Once All the Rage An early menu featured bios of the organists.
James Kawa

Queen Creek native Shelly Snyder recently visited Organ Stop on a first date. She described it as "the best first date I've ever had!" The food, while nothing fancy, is delicious. The pizza, piled high with cheese, is offered with a variety of toppings, all balanced on a thin, crispy crust. The menu features a few specialty pizzas beyond the classic cheese-and-pepperoni, such as the Spicy Italian, with spicy sausage and banana peppers.

The fried mozzarella sticks and zucchini are crispy and satisfying, and the fried mushrooms are juicy and packed with umami flavor. The garlic bread is decadent, slathered generously with melted garlic butter and cut thick for easy dunking in marinara sauce.

At Organ Stop, there's a palpable tinge of nostalgia present throughout the entire experience, and the novelty of the entertainment-based pizza parlor still holds up 50 years later. Pizza-and-pipes restaurants were once all the rage. Hundreds sprang up across the country in the 1970s and '80s. Now, they are considered a rarity.

These restaurants were early examples of novelty entertainment dining, and they sparked a boom that later included Rainforest Cafe and T-Rex Cafe. They directly inspired the foundation of Chuck E. Cheese eatery concept, explained Nolan Bushnell, founder of the Chuck E. Cheese Pizza Time Theatre chain, in a 2013 interview with The Atlantic.

As the novelty wore off, pizza-and-pipes restaurants began to die out. They were replaced with new experiences to satiate the ever-changing appetite of consumers. Tim Versluys was one of Organ Stop's organists when the restaurant was on Southern Avenue between Price and Dobson roads.
Organ Stop Pizza

Three locations of Organ Stop Pizza sprang up in the Phoenix area during the early 1970s, but only the store in Mesa, which opened in 1975, stood the test of time. It made the move from a building with a roughly 300-person seating capacity to its current 700-person theater in 1995, continuing to thrive while others failed. Organ Stop is proudly celebrating the 50th anniversary of its debut, making it the oldest surviving institution of its kind.

One secret to its success is the organ itself. Organ Stop Pizza claims to have the largest Wurlitzer organ in the world, composed of nearly 6,000 pipes and featuring more than 1,000 keys, pedals, and buttons, according to the restaurant's website. Lovingly called the "Mighty Wurlitzer," the instrument is one of a dying breed of theater organs. The American Theatre Organ Society, an organization founded with the purpose of saving and preserving theatre organs, has chronicled the history of these musical marvels.

Theatre organs formerly were used in silent movie theaters and were built to replicate the individual instruments of an entire orchestra as well as the sound effects of the films they accompanied. As "talkies" became more mainstream in the 1930s, many of these mechanical wonders were dismantled or destroyed. However, some came to find new life in unexpected places. This particular Mighty Wurlitzer was originally built for the Denver Theater in Colorado. It was purchased and reassembled for the Mesa location of Organ Stop Pizza when it opened, according to Barz. But the massive instrument wasn't simply rebuilt. Its new owners continuously added to it and expanded its capabilities over the years, piece by piece.

The most recent formal appraisal of the organ valued it at more than $6 million, Barz says. It's a figure that has likely reached approximately $8 million due to additions and market changes, he adds.

"The organist must be worth at least that much, too," Snyder jokes.

Organ Stop Pizza is a cultural footnote, a surviving relic from the past, a delicious and nostalgic restaurant, and a wholesome family experience all wrapped up in one. The restaurant holds fond memories for many, including Mesa resident Julie Spezzano.

The longtime customer has dined at the Mesa pizza parlor at least once or twice a year since it opened in 1975. She picked that location because it "had the best organist." "We all love the music, and the kids dancing. First it was me, then my kids, and now my grandkids. Three generations coming here," she says.

"Every December ... we come and celebrate his birthday here. If you knew the man, you would not think he would like a place like this, but he loved it," Spezzano says.

Before Barz became an owner, he had a personal connection to Organ Stop, as well.

"My family moved to Arizona in '73, and we actually lived about two blocks behind the first Mesa location," he says. "So, I remember when Organ Stop opened back in '75." 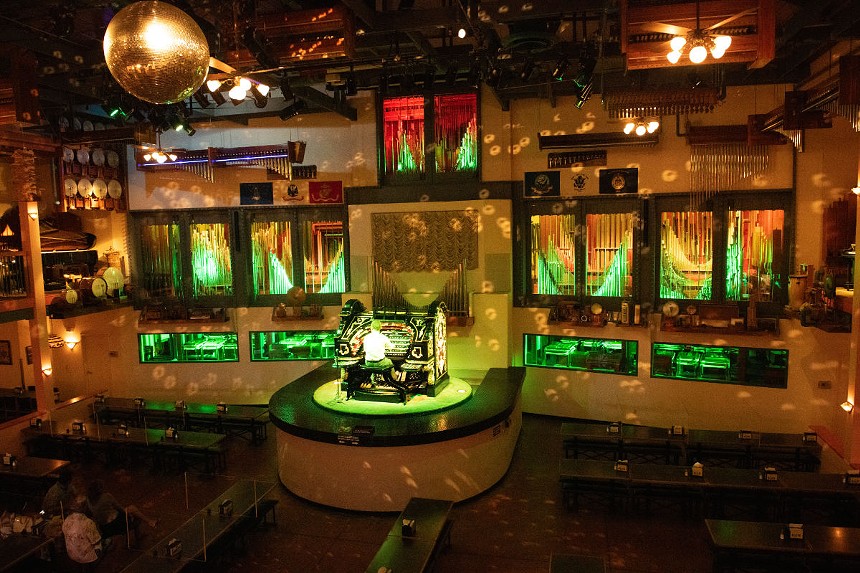 He visited the restaurant for the first time when he was 6 years old and was awestruck by the experience.

"I was just blown away by the place and thought it was so cool. And, you know, to be able to celebrate [the 50th anniversary] now, as ... one of the owners is just, it's amazing to me," he says. "It's extremely humbling knowing that for 50 years, this place has been an institution."

In honor of its semicentennial, Organ Stop Pizza is holding a "50 Days to Celebrate 50 Years of Fun!" event, which runs through Saturday, October 8. As part of the commemoration, the restaurant is offering a $50 meal deal, nightly food and merchandise giveaways, and 50 percent off small and large sundaes every Sunday.

Now is the best time to take a step back in time, enjoy some jaunty organ music, and make memories as families did in the 1970s and '80s.

"It's like something that you've never experienced before, and you just have to come in and check it out at least once," Barz says. "It's quirky. It's weird. It's fun. It's good. It's comfortable, and you know, it's pizza. What can go wrong with pizza?"

1149 East Southern Avenue, Mesa
480-813-5700
organstoppizza.com
KEEP PHOENIX NEW TIMES FREE... Since we started Phoenix New Times, it has been defined as the free, independent voice of Phoenix, and we'd like to keep it that way. With local media under siege, it's more important than ever for us to rally support behind funding our local journalism. You can help by participating in our "I Support" program, allowing us to keep offering readers access to our incisive coverage of local news, food and culture with no paywalls.
Make a one-time donation today for as little as $1. 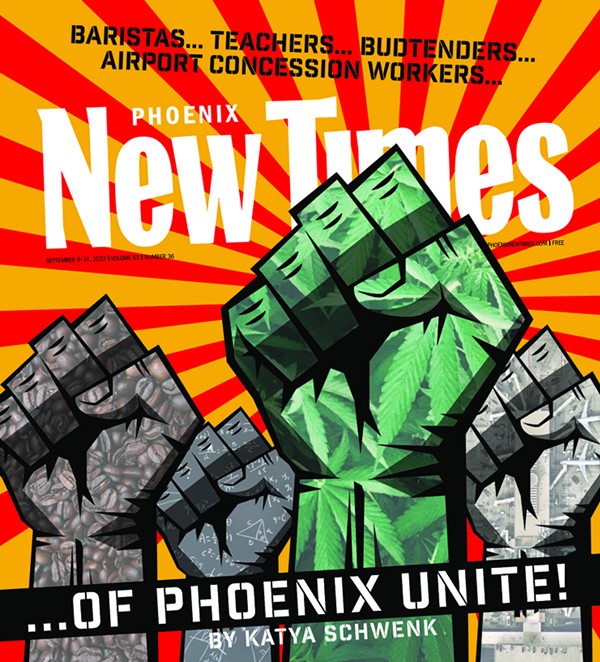