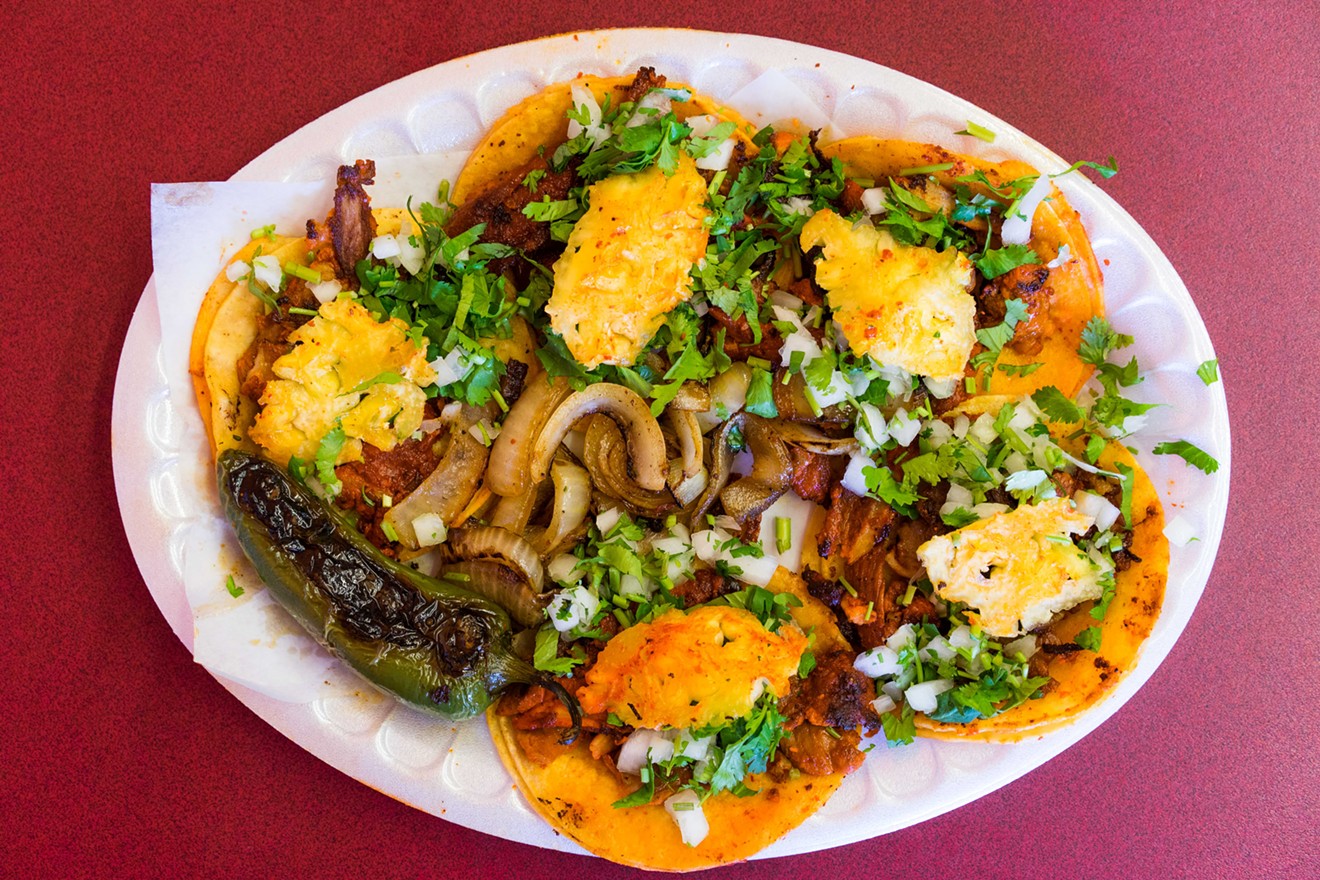 All of the meat options at Tacos Huicho are good, but when the al pastor spit is spinning on Tuesdays and the weekend, it might be the only thing you'll order. Shelby Moore

Located on a neighborhood corner just a couple of short blocks from Phoenix Children’s Hospital, it’s sometimes uncertain circumstances that lead diners through the doors of Tacos Huicho. The little taco shop and carnicería sits next to a Speedway Market liquor store on the corner of 20th and Oak streets, right next to the towering walls of State Route 51. The fact that anyone has discovered it at all must be thanks in part to Yelp’s best function: listing out what’s nearby. For hospital employees and anyone stuck circling the waiting rooms, Huicho is the closest option that isn’t the cafeteria.

Maria Torres owns Tacos Huicho with her husband, Mauricio Mena, and she says she sees a lot of customers from the hospital, and that many of her regulars are doctors and nurses there. One doctor, she says, will have people thanking him for his work, offering to take him to lunch.

“They’ll say, ‘We’ll take you anywhere you want to go,’” Torres says, "but he’ll ask them to take him right around corner, to Tacos Huicho." She has heard that they often pull into the parking lot and turn to ask him, "Why do you want to come here?"

Torres smiles. "And he says ‘I wanted tacos, and these are the best tacos in Phoenix.’” 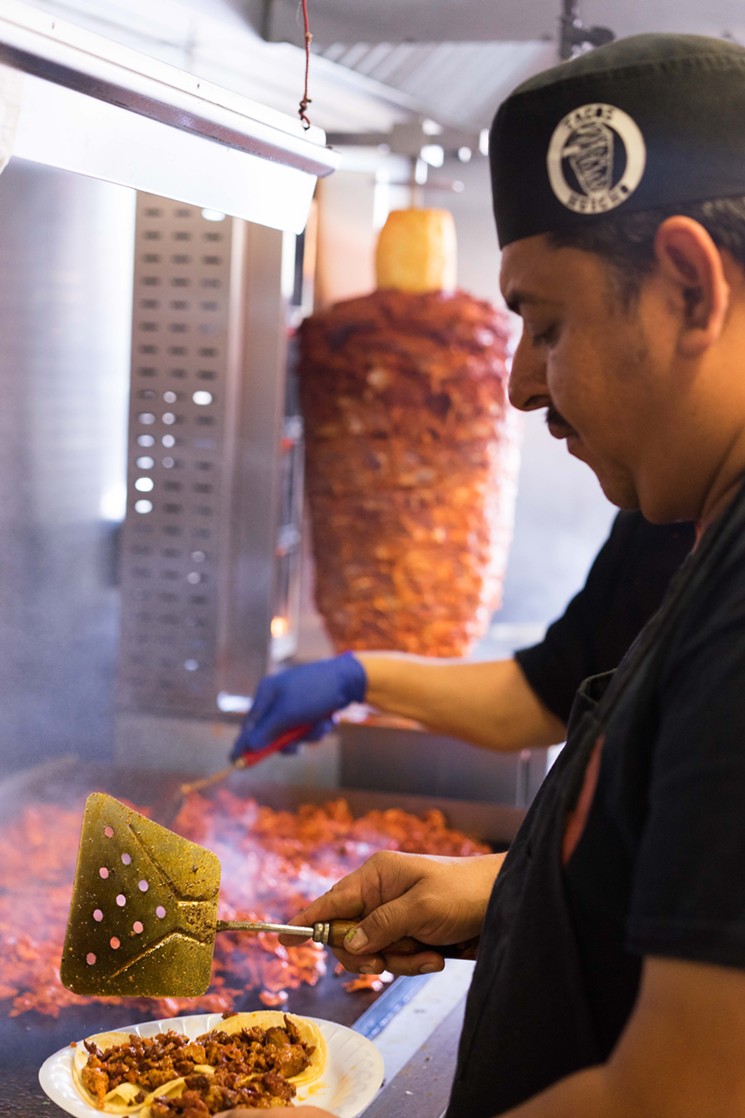 Al pastor first gets shaved from the spit, then finishes cooking on the stovetop.
Shelby Moore
click to enlarge 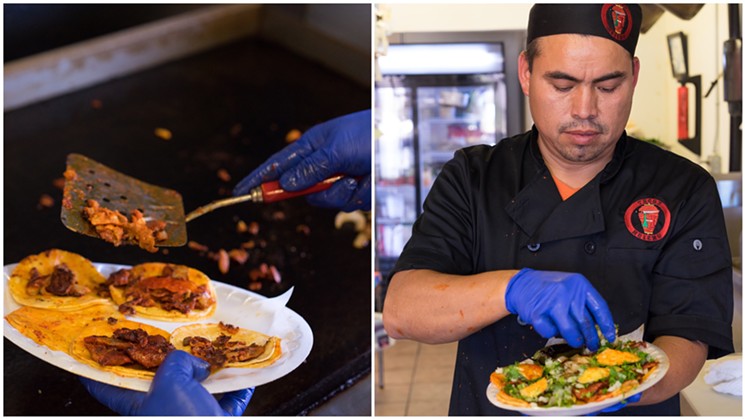 Mena prepares a plate of al pastor tacos.
Shelby Moore
Being a carnicería, Huicho has nine meat options for tacos, from carne asada, lengua, and cabeza to thin strips of salt-cured beef called cecina, but they are best known for their al pastor.

At least twice a week, Mena rests pork in a bright orange marinade of chiles and seasonings, and then loads the meat, along with a pineapple, onto a long, sturdy metal spit. Once packed with pork, it weighs over 80 pounds, requiring two employees to transport it from the kitchen prep sink in the back to the roasting station by the front door. There it will begin its long, slow spin in front of the roaster.

Most restaurants simply marinate their pork and cook it on a flattop stove, then serve it up as "al pastor." But this laborious process is necessary to achieve true al pastor flavor.

Mena carefully stacks the pork high in the prep sink. He’s been making al pastor since he was 12 years old, living in Cuernavaca, just south of Mexico City in the state of Morelos. 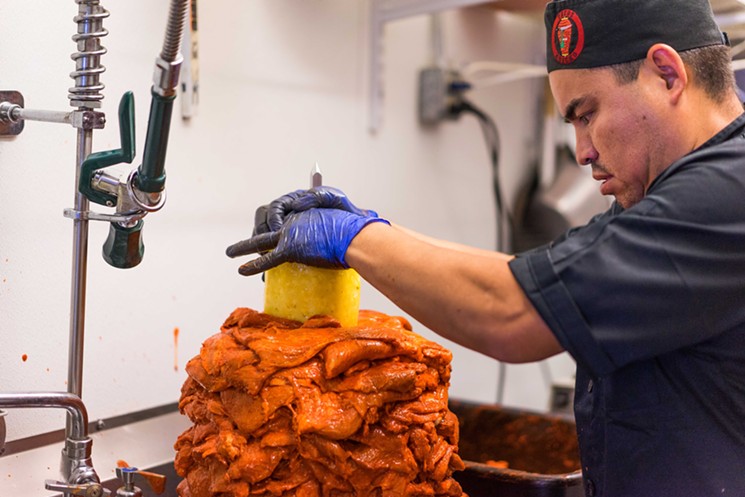 Tacos Huicho owner Mauricio Mena loads up a vertical spit with a pineapple and over 80 pounds of marinated pork.
Shelby Moore
click to enlarge 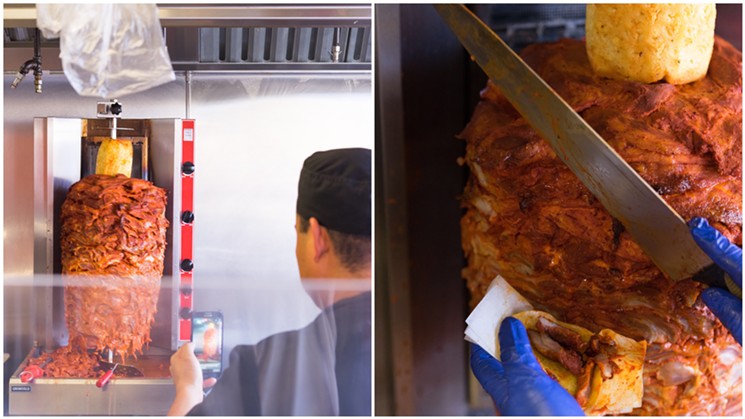 Left: Mena takes a photo of the loaded spit, which has just begun roasting. Right: Mena carves pork from the spit into a tortilla, which will be placed face down on the stovetop to finish cooking.
Shelby Moore
Torres and Mena have been following this routine for over 10 years in this location. Originally, they sold their tacos from a mobile food cart in the parking lot where they worked weekends for over five years.

“We started with a lot of dreams and no money,” Torres says. “We were broke.”

Torres says that customers kept asking them to open seven days a week, and to carry more meat options. A cart can usually only offer two or three, so eventually they knew they had to consider a permanent space. Then, one opened up next to the liquor store.

The neighborhood, she says, has come a long way since the days when they opened. Back then gang violence was a part of everyday life in midtown Phoenix. She remembers days when they would witness rival gangs exchanging fire from the pedestrian bridge on the 51 down to their parking lot.

Today, Torres says, there are no more guns.

Many of their employees are teenagers and young adults that grew up in the neighborhood nearby.

Tacos Huicho owners Mauricio Mena (left) and Maria Torres (right) have been making tacos in their neighborhood since 2002.
Shelby Moore
Huicho has done well at both the Arizona Taco Festival and New Times' Tacolandia, having won a handful of awards over the past few years. Between the notoriety that comes with the awards and visitors from the hospital, there are sometimes not enough tables in the small restaurants on Taco Tuesdays and busy weekend days, the only times that the al pastor is spinning and available fresh sliced off the spit.

Tacos Huicho has become a place, in the age of social media, that draws a crowd looking for some of the city’s best al pastor tacos. Torres plans to open up a separate dining room in the space next door this summer, and another location by Banner Health on McDowell Road and 12th Sstreet (near the south side of the neighborhood) later this year.

“I like it when I cook and people eat my food.” Torres says. "It doesn’t matter what they look like or where they come from. This is the best thing for me.”
Our Taco Summer picks so far: