The thing strips of cecina, cured quickly by salt and sun, are chopped and fried on the stove, where they curl up and turn crispy. Shelby Moore
In the hunt for the latest trendy restaurants, our spotlight often misses neighborhoods that are home to some of the Valley's best kitchens — including those making metro Phoenix's best tacos. Over the next several weeks, we’ll be guiding you toward the Valley’s tastiest tacos, and the taquerías that serve them. Welcome to Taco Summer.

Carniceria Cuernavaca is a modest operation, small in stature and dimly lit. That doesn't stop the little market from bustling to capacity as neighborhood patrons treat the space as a grocery store, convenience mart, or diner, depending on the time of day.

This is the closest thing to a classic New York City bodega that we've found in the Valley.

The market opened in 2005. Back then, when 20-year-old Francisco Santana was just a kid, he would help his father, Efrain Santana, after school. Today he works full time there, usually running the register and the drive-up window, which runs along the same side of the counter as the meat case. This is also where he takes prepared food orders, the options written on a large menu hanging from the ceiling.

When the place is busy, if you take too long contemplating the many menu options, you could lose your chance to order, being bumped to the back of the line of customers waiting to pay for their beer, Popsicles, bags of raw shrimp, and tortillas, some still steamy and fresh from the local tortilleria.

Once you do get an order in, be warned that there is only one table with four seats in the entire joint. Most people eat quickly and don’t hang around too long, but if the timing isn’t in your favor, you’ll have to eat standing up, like one man we saw who simply pulled up an upside-down bucket, eating in the middle of a grocery aisle.
click to enlarge 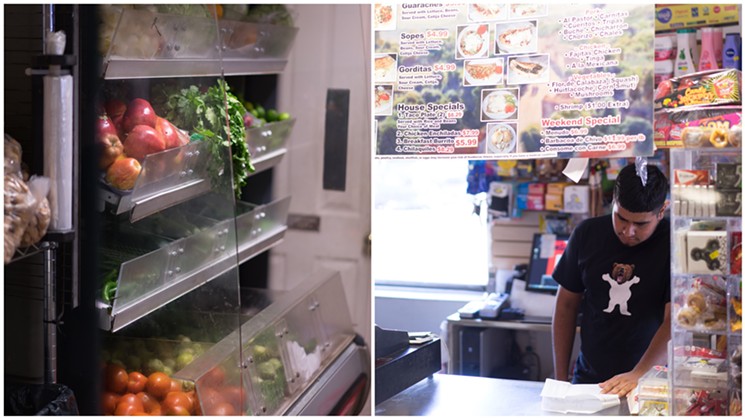 Left: The produce fridge at the market is stocked with tomatoes and tomatillos, among other staple produce. Right: The front counter is where all items are rang up and where prepared food orders are taken.
Shelby Moore
click to enlarge

Owner Efrain Santana, left, and his son, Francisco.
Shelby Moore
Over the past few years, the carniceria has gained attention for picnic-style mesquite-grilled chicken meals. Tortillas, rice, a soupy style of beans with sliced hot dog, and enough chicken for two runs $10. The chicken is cooked out back, and the smell of burning mesquite and chicken fat wraps around the building in the late afternoon.

But Efrain, with Francisco helping to translate, says that the carne asada is the most popular item they serve, and the cecina is his signature dish.

Cecina, essentially, is a thin, very quickly cured beef, mostly found at carnicerias that know how to prepare the specialty item. Efrain brought the recipe with him from Cuernavaca, the capital city of the inland state of Morelos, south of Mexico City.

Cecina hinges on a technique of skillfully slicing a big slab of beef, like several pounds of top round, into one very long slice that, when laid out, spans yards. The slice is sprinkled generously with salt and allowed to cure in the sun for up to an hour, where it will partially cook, turning brown. When it is chopped and fried to order using oil, the thin bits curl up and get crispy. The result is tender, salty beef with crunchy edges.

The tacos are served, as all are, with wedges of lime and a unique, tangy salsa made from adobo chiles and roasted tomatillos. There is also a puree of adobo chiles and seasonings that have been steeped in oil until they turn a deep, dark shade of red. It's an uncommon condiment and shouldn't be missed.

Cured beef, called cecina, is partially cooked in the sun and then fried on the stovetop to order.
Shelby Moore
I ask Efrain why he chose to open a carniceria. After a long pause, he turns to Francisco and says, “no se”: "I don’t know." Francisco says that his father isn’t sure how to answer the question.

But a young woman, around Francisco’s age, passing through the register, offers up an idea.

“It’s because it’s where everyone comes to.”