Remember when women in politics fought for the rights of their fellow females, birth control rights, abortion rights, equal pay, and all the rest? These days, there seem to be more and more of the pre-Bella Abzug types around, determined to put their sisters back in the kitchen, barefoot and pregnant. One of these throwbacks locally is state Representative Debbie Lesko, Republican from Legislative District 9. A tool of the good ol' boy corporate shills at the American Legislative Exchange Council, Lesko might vote to repeal the 19th Amendment to the U.S. Constitution if given the chance. Lesko was the primary pusher of an anti-contraception bill that allows religious employers the right to deny their employees insurance that covers birth control. Birth control? What is this, the early '60s? Lesko's bill was killed in the state Senate the first time around, only to be revived, passed, and signed by Governor Jan Brewer, another antediluvian hack eager to roll back women's rights to the caveman days. Maybe then Lesko would have a rock to write on as large as the one in her head.

For those cynical Democrats who've argued that the recall of ex-state Senate President Russell Pearce only resulted in a Republican replacing a Republican, check out the way state Senator Jerry Lewis, the GOPer who beat Pearce in that contest, voted when it came to state Representative Debbie Lesko's anti-contraception bill, which allowed religious employers to deny their employees insurance that covered contraception: He voted against it, twice. If Lewis had never set foot in the Senate, the end result would have been the same. But the same could be said of every Democratic "nay." And Lewis is not a D. He's an R, and a highly religious member of the Mormon Church to boot. No, the recall did matter, and Lewis' profile in courage on the Lesko bill is just one reason why.

First-term GOP Congressman "Baby Ben" Quayle looks like a punk and acts like a punk. What else can you say about a onetime writer for the R-rated Dirty Scottsdale website who opts to jump districts and run against a fellow R because that's easier than running against a Democrat in a competitive district? That's what happened earlier this year when Baby Ben jumped from Congressional District 9, where he would've faced a pitched battle in the general election against a D. So the wussy kinda-sorta conservative skipped over to CD 6, where Congressman David Schweikert already was set to run. So much for party solidarity. Quayle's a rich weenie daddy's boy who never had a tough day in his life.

Until primary day this year. Whoops. In office or not, this guy will always be a political coward, one for whom both Rs and Ds at large should have complete contempt.

Does Maricopa County Supervisor Mary Rose Wilcox deserve a massive $1 million payday for being targeted by Sheriff Joe Arpaio and disgraced, disbarred Maricopa County Attorney Andy Thomas? True, Wilcox was wrongly charged by the pair, though she escaped the handcuffs and the perp walk endured by her colleague, Supervisor Don Stapley. But all the charges were dropped and, other than the stress placed on her, Wilcox came out unscathed and a heroine to her community. If the money were Arpaio's, it wouldn't stick in our craw, but her moolah is coming from the public trough, so in our craw it sticks. The green is legally hers to pocket. We can't dispute that. But since she's cashed in on a situation that negatively affected all county residents, may we suggest she put the money toward some charitable effort, and not one that enriches her in some way? If so, all will sing her praises. Otherwise, the title "money grubber" will stick to her like Velcro, whether or not it's a fair rap.

Russell Pearce's attempt to gouge the state Legislature out of $260,000

The world knows no crassness like disgraced ex-state Senator Russell Pearce, with his three pensions, his Fiesta Bowl freebies, and the sham candidacy of Olivia Cortes. His buddies in the state Legislature aren't much better, truth be told. This year, Pearce cronies state Senators Andy Biggs, Steve Smith, and others conspired to have the state of Arizona reimburse Pearce for the $260,000 he spent losing the historic recall election forced upon him. Ultimately, the plan backfired, with an incensed public phoning legislators to tell them what scum-suckers they were for even suggesting that Pearce garner dime one of the public cash after being booted from office by that self-same public. Biggs, Smith, and Pearce have no apologies and no shame for their attempt to gouge the taxpayers. Which shows you what they're all about. Like you didn't know already.

The mud was a-slinging in this year's mayoral election in Tempe, in one of the dirtiest — and closest — municipal elections in recent years. In one corner, there was Mark Mitchell, a Tempe councilman and son of former Congressman and Tempe Mayor Harry Mitchell. In the other corner, there was Michael Monti, whose father founded Monti's La Casa Vieja restaurant on Mill Avenue. Neither side was quite polite in the election, but Monti definitely delivered the slimier slime. It started with both sides attacking the other's business backgrounds, before Monti made a stink over Mitchell being arrested at a Mill Avenue bar — in 1993. As the election neared, someone just happened to accuse Mitchell of sexual misconduct — which was supposed to have occurred in 1983 — although Monti denied having anything to do with it. Despite the sliming, Mitchell hung on and since has been sworn in as the new mayor of Tempe.

Jairo Contreras, in a laundry cart

In February, burglary suspect Jairo Contreras escaped from a jail run by the self-proclaimed "toughest sheriff" in America, Maricopa County Sheriff Joe Arpaio. Contreras must have thought about this one for weeks — he hopped in a laundry cart and got wheeled out. Contreras was just about to be released from the jail on work furlough, but decided to be carted out instead. Arpaio informed the public about this two weeks after the fact, as the Sheriff's Office said it used "cell phone technology" to track down Contreras at his girlfriend's house in Sante Fe. As the U.S. Marshal's Office informed New Times after Contreras' arrest, the MCSO literally had nothing to do with tracking down Contreras, and "cell phone technology" turned out to be as real as unicorns. On the plus side, it was one of the first times that dirty laundry actually left the Sheriff's Office, even though an escaping inmate went along with it.

Sheriff Joe Arpaio (if he wins)

America's most corrupt sheriff is now 80 years old, has been in power for two decades, and is telling the same lame pink underwear jokes that he's been telling since Bill Clinton was president. What the hell is the matter with Sand Land, and particularly with this county? Two words: snow birds. Though it's highly likely many of them are breaking the law by voting in two states, Arizona's racist alter kockers still dominate county politics, and they love their fellow senior citizen, Sheriff Joe Arpaio. Which is why we're considering high-tailing it should Arpaio be re-elected to an unprecedented sixth term. After all, neither Joe nor the blue-haired meanies who've made him the King of Maricopa County can live forever. Once Joe or enough of his followers take a dirt nap, we'll consider returning. Assuming, of course, that these hateful geezers don't outlive us.

Best Place to Brush Up on Your Chemistry 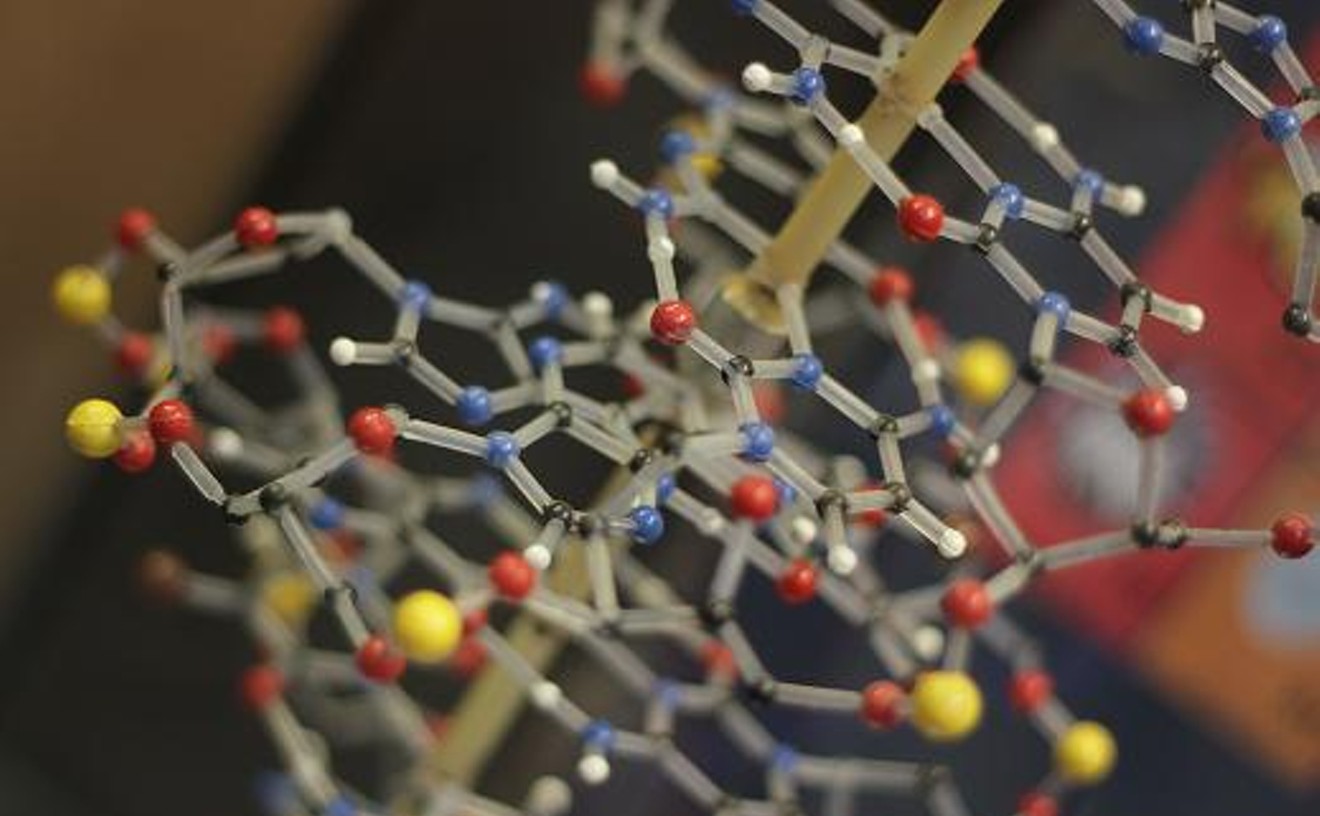 It was Shakespeare's tragic Hamlet who wondered whether it was nobler to suffer quietly or better to take up arms. But when it comes to being dignified on ASU's main campus, the brainiest of the student body — instead of gawking at the scantily clad bodies of coeds — take to the quiet confines of the Noble Science and Engineering Library. Located near the north end of the university's grounds, the three-floor library houses nearly half a million volumes grouped by topics including chemistry, geology, and physics, as well as a collection of more than 200,000 maps. In addition to the educational materials is a sequestered stillness where they can be absorbed and enjoyed. Shush away and brush up on your organic compounds in peace.

Many times a day in this country (and many more times worldwide), someone feels the sting of two needles pierce his or her skin, followed by a hair-raising, five-second jolt of electricity. Taser weapons are in use by more than 16,000 police departments in more than 100 countries, and they've changed the business of policing at a fundamental level. Cops reduce injuries to themselves by choosing to "tase" someone rather than getting into a fight, and sometimes a suspect who might have ended up shot rides the lightning for a few seconds instead.

The electrifying trend took off from Scottsdale almost 20 years ago, after two local brothers, Rick and Tom Smith, bought the rights to an early form of the weapon. Starting from their garage in 1993, the Smiths made the product marketable — in part by abandoning a propulsion method for the darts that used gunpowder, going instead to an air-powered model. By the 2000s, Taser International had turned into a powerhouse with high profits and soaring stock prices. The company's seen ups and downs in finances and public opinion — critics blame Tasers for the deaths of hundreds of crime suspects — but its revenue was up this spring following sales of its new "X2" stun gun. One of the Valley's most notable exports, in other words, is pain.