Jude Stone said he was a victim of the anti-transgender policy at Great Hearts Academies. Molly Longman
Jude Stone loves drama. The Great Hearts Scottsdale Preparatory Academy alum was active in his school’s theater club before he graduated last spring.

He loves the stage. He savors the applause. He flourished playing Donald Navadel last spring in the academy's production of the 1936 comedy An Idiot’s Delight.

But the 18-year-old was ensnared in real-life drama more akin to tragedy during his senior year at Scottsdale Preparatory Academy, which is one of many schools in the Great Hearts Academies system in Arizona and Texas.

Stone, a transgender man who is listed as female on his birth certificate, says he was a victim of a discriminatory “biological sex and gender policy,” which Great Hearts adopted in summer 2016, just before Stone’s senior year. 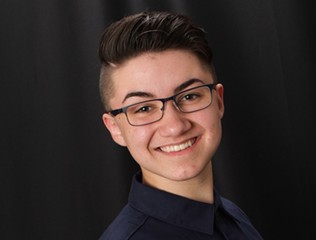 Jude Stone says some Great Hearts Academies' policies are discriminatory toward transgender students.
Courtesy of Jude Stone
The controversial policy prohibits transgender students from using bathrooms and facilities that correspond with their gender identity, or their internal sense of being male, female, or something else, whether it relates to the sex on their birth certificate.

Stone said this particular policy was his greatest grievance at the charter school as a transgender man. He said last year he’d have to scurry around the Scottsdale building, using gender-neutral bathrooms that were out of his way. Aside from making him late to class, it caused him to cut it close on his theater cues.

When the drama club put on plays, Stone said two classrooms were cordoned off into men’s and women’s changing rooms for speedy costume switches.

But Stone wasn’t allowed to use either classroom. He had to high-tail it to the gender-neutral bathroom, then dash back to the stage in time for his scenes.

“It was just upsetting — me having to go so far out of my way, while everyone else is being treated like a normal person,” Stone said. “It just was so hurtful to me. I really felt isolated and alone. Even my friends who were sympathetic didn’t get what it was like to be told you can’t use this bathroom all the other guys can use.”

Stone is among many who see a problem with the sex and gender directives at Great Hearts Academies.

The charter school’s policy has garnered negative attention from the students, parents, alumni, community members, and the ACLU of Arizona, to name a few.

Opponents of the policy like Madelaine Adelman, a founding board member of the LGBTQ education group GLSEN, say the school’s sex and gender guidelines are discriminatory towards transgender students.

Aside from the bathroom rule, Great Hearts’ regulations dictate that students must follow the “uniform code and grooming standards” of the sex listed on their birth certificate. This means a transgender female student couldn’t wear a pleated skirt or the modest earrings the dress code permits because her birth certificate says "male."

This means it’s pretty much up to a teacher’s discretion to honor a transgender student’s preferred name and pronouns.

“It is that one teacher could address you as Tom in math class, but then the next teacher says you’ll be called Tanya in English class,” Adelman says.

The policy is unique in Arizona. Not because most other schools have transgender-inclusive policies — most schools don’t have policies at all. But Adelman says having no policy is a step implementing an explicitly discriminatory policy.

“The point of going to school is to learn, not to be excluded or to be taught to hate yourself,” Adelman said.”

When Phoenix New Times called the Great Hearts communications line to ask about the policy, a chipper voice on the end of the line said the system had “no comment at this time” and then promptly hung more questions could be asked.

The policy was quietly implemented during summer 2016. It didn’t begin to garner attention, though, until this past spring when the city of Scottsdale began crafting plans to partner with Great Hearts on a park for residents in the DC Ranch area that Scottsdale Preparatory Academy students would use as athletic fields.

The ACLU wrote in a letter to the city of Scottsdale that the policy was "discriminatory, anti-transgender.”

A group of alumni sent a letter to Great Hearts’ school board asking that the policies contributing to “transphobic violence and discrimination” be repealed and replaced.

After this series of public dust-ups and condemnation from two Scottsdale City Council members, Great Hearts appeared to take the community’s discrimination accusations and bell-ringing seriously.

Stone and other alumni say they discussed their concerns with members of the charter school’s leadership team this summer, including Great Hearts Chief Innovation Officer Erik Twist.

Adelman also met with Twist to discuss the dangers of the imposed policy and proposed suggestions to correct the more problematic rules during a summer meeting.

The dress code, for example, could be an easy fix. Simply making it gender-neutral would be more inclusive.

But to change the bathroom policy, Great Hearts would have to amend its statement about what sex and gender mean, Adelman said.

“We had this respectful back and forth during our conversation, which lasted quite long,” Adelman said. “It was not a symbolic, drive-by type of meeting.  … They should be complimented for moving in that direction.”

Twist told New Times in a message that Great Hearts had no comment on the policy, but that he “greatly appreciated Maddie at GLSEN for the respectful dialogue.”

That said, a meeting is just a meeting until something changes.

“Whether or not anything will change, I can’t say,” Adelman said. “There’s a reason they promulgated the to begin with. It didn’t come out of thin air. Why sustain a policy that seems to explicitly require discrimination? That’s a question mark.”

Stone says he hopes that the school will hear the pleas of those who oppose the policy and repeal and replace it with one that would create a more inclusive environment for students like him.

One of the many things Stone learned at Great Hearts Academies was to not be easily offended.

“I was treated differently,” Stone said. “If the school wasn’t standing behind me, why would the students?”

Adelman understands this sentiment. And she hopes Great Hearts will take her advice future students won't echo it.

“What’s really interesting is the research shows that when you make a school safer for LGBT students, the students who don’t identify with all those letters actually feel safer," Adelman said. "Because the message that’s being sent is you can be who you are. It’s an encompassing, inclusive, affirming way of being in the world."