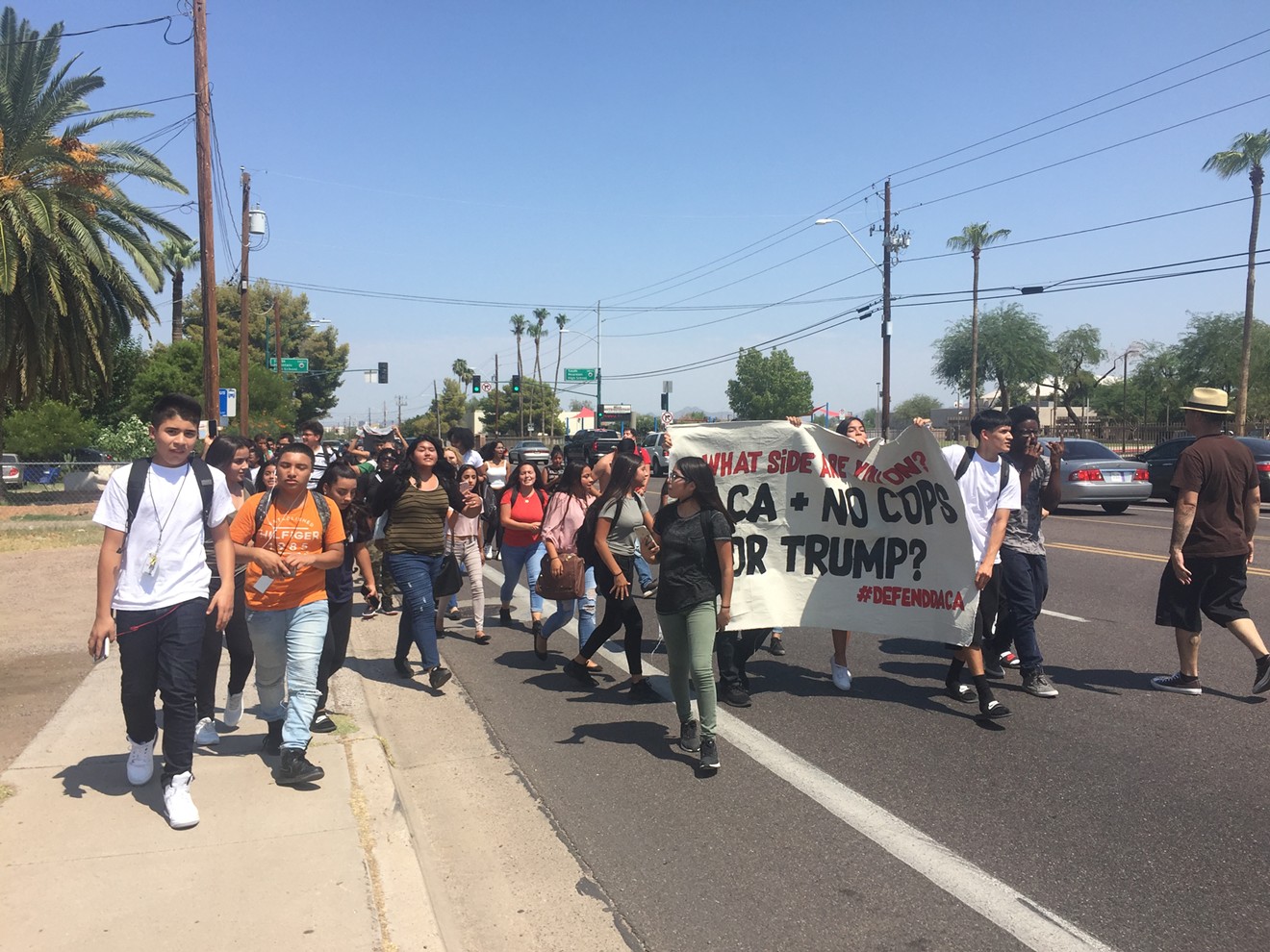 "Everybody was walking out, so we decided to join in," she said. Though she typically doesn't take part in protests, this one felt personal: She's undocumented, and, until this morning, had less than a year to go before she became eligible to apply for temporary legal status under DACA. (Phoenix New Times is withholding her last name to protect her privacy.)

While some of her classmates exuberantly chanted, "Fuck Donald Trump!" and blasted music from speakers, Michelle hung back.

"It was really sad, because so many people got the chance to work and travel, but all of that is taken away from us because of one person," she said. "I was planning to do it when I turned 15, but now I don't know if I can."

Michelle, who is originally from Mexico, wants eventually to attend college in the United States and become a therapist. She's one of hundreds of high school students who walked out today in order to protest the White House's decision to phase out DACA. 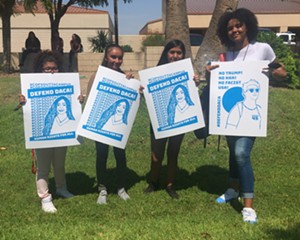 Freshmen from South Mountain High protest outside the Phoenix Police precinct.
Antonia Farzan
According to Puente Human Rights Movement organizers, who helped coordinate the walkouts and made sure that the teenagers called their parents afterward to say they were okay, roughly 300 South Mountain students took part. Another 200 or so walked out later at North High in central Phoenix.

Phoenix Union School District, which includes North High and South Mountain High, doesn't keep track of how many DACA recipients are enrolled because they can't legally ask students about their about immigration status, district officials said.

However, many of the students in the group said that they were there to support friends or family who now face an uncertain future in the United States.

Martha Torres, a sophomore who was wearing a yellow South Mountain Soccer T-shirt, explained that although she's a U.S. citizen, her brother is undocumented.

"He was planning to apply for [DACA], but now he doesn't have the opportunity," she said. "The people who got it, they're all accomplishing their goals. I felt angry when I heard the news — it's not fair to just take it away from people who need it."

The students marched to the Phoenix Police Department's precinct on Southern Avenue, attracting honks and cheers from drivers in the heavily Latino neighborhood. A man in an orange safety vest and a name tag from Ranch Market stood in the store's parking lot and fist-bumped students as they walked by. "Sí, se puede!" he told them.

The choice to end the march at the precinct was strategic: Since May, Puente has been helping Phoenix Union students organize a campaign titled "Cops Outta Campus." The goal is to get police officers out of schools and redirect that money toward educational and social services instead.

Though not all the students taking part in the walkout were aware that the march had a bigger purpose beyond protesting Trump, a few expressed frustration with the presence of law enforcement on their campus.

Meanwhile, at North High School in central Phoenix, another mass walkout was getting started.

Maximiliano Gutierrez was sitting in his first-period psychology class when he heard the announcement. Principal Vanesa Casillas came over the PA system to tell her students that DACA had been repealed. It sounded like she was crying.

Suddenly, a girl in Gutierrez's class got up and burst out of the room.

"A lot of people's lives are just gone," Gutierrez said. "A lot of these kids grew up with DACA. Now, it's like throwing them into the deep end of the pool and they don't know how to swim."

During the second lunch, Gutierrez met with his friends, juniors Yazmine Sagastume and Emerie Clark, and joined an estimated 200 students who walked out in protest of the DACA repeal and headed to the ICE offices on Central Avenue.

Though none of the three 16-year-olds are DACA recipients themselves, they said they were walking in solidarity with those who are.

"They're students, friends, teachers," Sagastume said. "I'm not on DACA and I have the privilege to go to school, and they're getting those privileges taken away."

"It sucks that we have to miss the education that we're fighting for, but this is the attention it needs," Clark added, noting that her teachers were supportive and asked if they had water to carry with them in the 107-degree heat. Students from North High School walked out of school and marched to the ICE's Phoenix office to protest the repeal of DACA.
Lindsay Moore
They didn't need to worry: At the corner of Seventh Street and Virginia Avenue, Julio Zuniga, a Puente volunteer and track coach at South Mountain High, was handing out water bottles and Nutrigrain bars.

Zuniga is a DACA recipient and has until 2019 until his permit expires. His students ask him if he's scared, he said.

During Zuniga's senior year of high school, he and other students walked out to protest restrictive immigration laws. Although he was a Division I track runner, he couldn't accept some of the scholarships he was offered because he was undocumented.

"I had no choice," he said. "If I hadn't graduated high school, I wouldn't have had anything. I fought for my right to work."

Although he has a job as a mortgage loan officer, he also works as a substitute teacher so that he can be a role model to the kids in his community.

"I hope all these students know the reason they're doing this," Zuniga said. "They're going to remember this day and they're going to feel empowered instead of defeated."