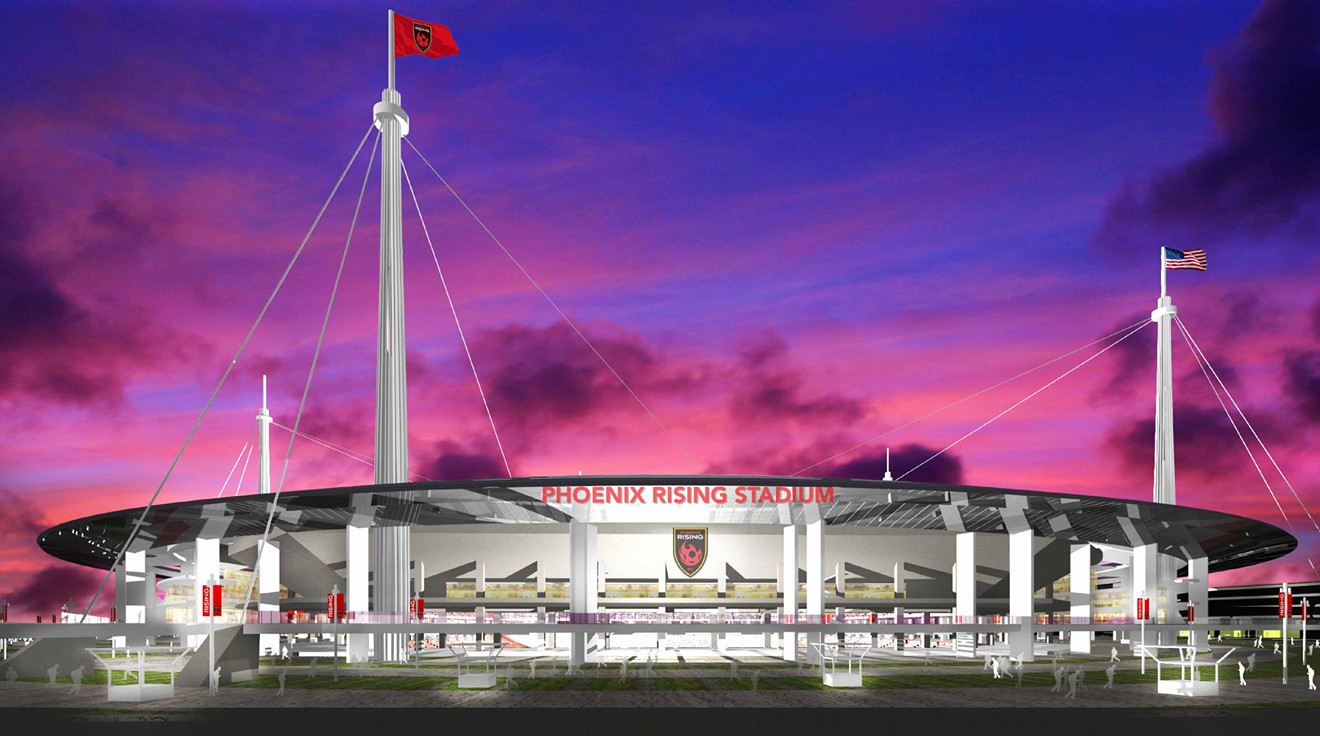 An artist's rendering of the proposed Phoenix Rising stadium, planned at Curry Road in south Scottsdale. Construction is underway on an interim stadium there. Courtesy: Phoenix Rising FC 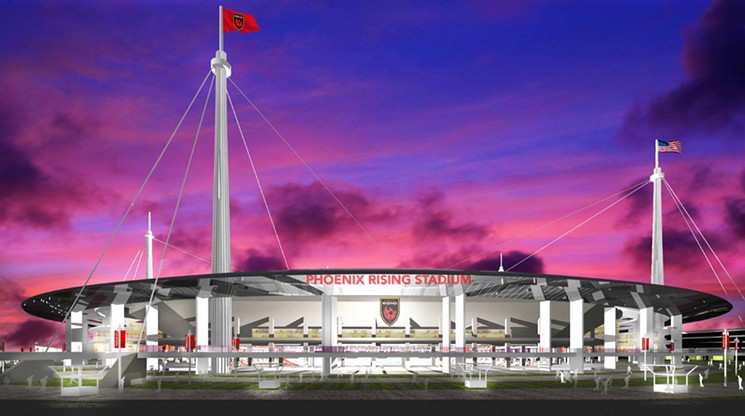 An artist's rendering of the proposed Phoenix Rising stadium, planned at Curry Road in south Scottsdale. Construction is underway on an interim stadium there.
Courtesy: Phoenix Rising FC
In soccer, timing is everything.

This past week, the revamped Phoenix Rising FC put its best foot forward as one of a dozen organizations bidding to cash in on the rapidly-growing popularity of U.S. Major League Soccer.

Phoenix is trying to become one of four cities to become the site of an expansion team, as the league swells from 24 to 28 teams.

The Rising and 11 other franchises from around the country submitted bids to the New York-based MLS on Wednesday, January 31. Expert opinions vary over whether the Phoenix club can rise from its bumpy beginnings in the lower reaches of U.S. soccer and from struggling season in the United Soccer League's third division last year.

Club governor Berke Bakay, the CEO of Kona Grill, finds himself positioned like a star forward clear through on goal. He could either find the net and join U.S. soccer’s elites, or be flagged for offside and left thinking about what could have been. It’s all about the timing of the run.

That timing is complicated. Evidence suggests the bid decision could go either way.

Neither the league nor the club released its bid package, in which the Rising claimed to include written backing from 45 Valley leaders. The stadium project, owners say, has the backing of Barclays Bank and Goldman Sachs, and will not require a penny from taxpayers.

“It’s time for the MLS to come to the Southwest and rise with our fans in Phoenix,” Bakay said in a released statement announcing the bid.

Club owners noted that no other competing city has as large a population, nor as many millennials and Latinos, two groups driving much of the sport’s surge in popularity in the last decade. Phoenix also has the largest TV audience and no existing MLS team with 300 miles.

The club proposes a soccer-only stadium seating 8,000 to 10,000 fans at first. Seating would resemble that at the Waste Management Phoenix Open.

It says it has secured rights with the Salt River Pima-Maricopa Indian Community to develop the venue, and begin construction.  The first version of the stadium will open in March with 6,100 seats. The plan is to expand the facility to as large as 10,000 seats.  Ultimately, the goal is reach 25,000 climate-controlled seats.

The proposed soccer stadium would be located near the intersection of Curry Road and McClintock Drive in south Scottsdale.
Courtesy of Google Maps

The stadium, along with a training and academy complex, would be on the reservation at Curry Road near the intersections of Loops 101 and 202 in south Scottsdale.

Recent soccer events in the Valley have been well attended. Three times in the last three years, 60,000 fans packed University of Phoenix Stadium in Glendale to watch Mexico’s national team, including a warm-up World Cup showdown with the U.S. in 2014.

All of which suggests the linesman’s flag may stay down when the MLS expansion committee begins its deliberations. Major League President and Assistant Commissioner Mark Abbott told reporters this week that would happen in “upcoming weeks.”

He added the league hopes to name the next two expansion teams sometime this year, and for them to compete in 2020. The MLS will select two more teams at some indeterminate time to be added later.

“I cannot imagine a more positive environment to lift Phoenix up to the MLS,” franchise co-owner and board member Tim Riester said. “I think we have an extremely attractive chance.”

But there are signs the Rising could be yet flagged offside. Some experts, including sports journalist Kevin Reichard think Phoenix’s timing may be off.

“It’s a longshot because there are so many good bids out there."

Complicating Phoenix’s application, three other professional sports franchises in the Valley – the Suns, Coyotes, and Diamondbacks – are all looking for new or improved venues. That, Reichard said, puts pressure on all sports owners.

The club is less concerned. Phoenix Rising FC owners meet with Major League Soccer officials during a recent visit to the soccer club.
Courtesy of Phoenix Rising FC
“If you are a sponsor of MLS, having Phoenix in the league has a dramatic increase on your reach,” Riester said.

MLS officials say bidders with strong ownership groups, a solid stadium plan, and the right market will be looked on most favorably. But league officials were coy about which cities stood the best chances, and some obvious advantages or drawbacks may not matter so much.

For decades, observers have said Arizona’s searing summer temperatures were the death knell for netting a big pro soccer team. Yet, the 2022 World Cup is to be played in equally sweltering Qatar, other MLS teams play in inhospitable climates such as those in Houston or Minneapolis, and Arizona hosts other pro teams.

The games will kick off after sundown, and will be scheduled to give Phoenix more home games before the triple digits arrive.

The Rising cites the size and distance of the Phoenix market from others as a plus. Yet, Abbott noted geography “can cut both ways.” He told reporters, “One of the core, I think, real competitive advantages or identities of our league are these great rivalries we have.”

He was referring to the intensity shown by rival Seattle and Portland, Oregon, or Los Angeles and San Jose, California, fans, relative neighbors in MLS terms.

The depth of fan support is another key factor for the MLS. Here, the Rising has work ahead.

“We need a community of soccer fans committed to rising into the MLS,” Riester said, echoing a theme in much of the club’s publicity literature.

The 2016 USL Division Three season was not the ideal starting place to stake a claim.

The Rising won only four of its 16 home games last year. The team ended up third from the bottom and 18 points behind champions Sacramento Republic, one of the teams in competition for an MLS expansion slot.

The results showed in the stands. Phoenix has a fan base of 4,400; Sacramento’s is closer to 23,000, according to the soccer industry tracker transfermarkt.com.

The club is undeterred.

Last year, the team played at stadium in Peoria built for baseball. The turnout reflected the diehards, but that, Riester says, will change with a comfortable venue built for the purpose. The Rising says it’s investing big on players, coaches, and an all-soccer facility to give the region “a professional soccer team playing at a level you just want to see.”

It’s not the club the owners acquired.

The original Arizona United lasted three years, after the owner ran out of money. Bought, renamed, and revamped, the Rising is building for the future.

Yallop isn't a household name in Arizona. But he played nearly 400 games in the English league, many in its top division, before hopping the pond. On this side of the Atlantic, he coached the San Jose Earthquakes to two titles, brought megastar David Beckham to the LA Galaxy, and also coached the Canadian national team.

However, some of the Rising’s plans may rest on shaky foundations.

One selling point in the bid: plans for a light rail station next to the future stadium. The league is keen on luring urban, millennial fans to convenient venues. Seattle, Portland, San Jose and Minneapolis are just some teams with close-in stadiums near transit.

Problem is, there are no plans on the books for a light rail station, or any other kind, at Curry Road, said Valley Metro. Tempe is developing plans for a street car to integrate with Metro, but that entails a three-mile loop near ASU’s main campus, with a short spur along Rio Salado Parkway. Work is set to begin by year’s end, and the short line is projected to open in 2020, Metro said.

The nearest light rail station to the stadium is nearly two miles away.

Against that backdrop, the reviews on Phoenix’s chances have been mixed.

“The size of the market is not as relevant as you think, because it’s a sport based on 20,000 fans and a limited slate of games. MLS tends to be much more focused on the fan base and its experience,” he said.

Kansas City, Missouri, offers the model, with distinct sections for families, corporate booths, general admission, and a standing section for the hardcore fans who come through their own entrance and never interact with the rest of the stadium,” Reichard said.

Jeffrey Carlisle, writing for ESPN observed, “Among the expansion candidates, Phoenix is the largest city in the U.S. without an MLS team, and the fact that its stadium site has been secured is a big plus. The site plans include housing the club's academy and access to light rail. That the ownership group has USL experience is a plus, though the team didn't draw well last season.”

NBC Sports wrote, “Phoenix is seriously in the mix after Major League Soccer invited USL team Phoenix Rising to submit an application,” but did not elaborate on its chances.

Sports Illustrated’s Planet Futbol evaluated seven bids in detail this week. Phoenix was not among the first batch.

For its part, the Rising is less focused on the opposition and more on its own game plan.

“Phoenix as a whole has demonstrated time and time again that it can support the largest sports franchises,” Riester said. “I’ve lived here 32 years, and I’m betting my own money on Phoenix.”

All eyes now are on New York City, the MLS, the referee. He will decide to the blow the whistle on the Rising's bid and halt in its tracks, or allow the club to continue on to the goal.