'Sex Mex' Is Trendy, but Using Sex to Sell Tacos Is Hardly New 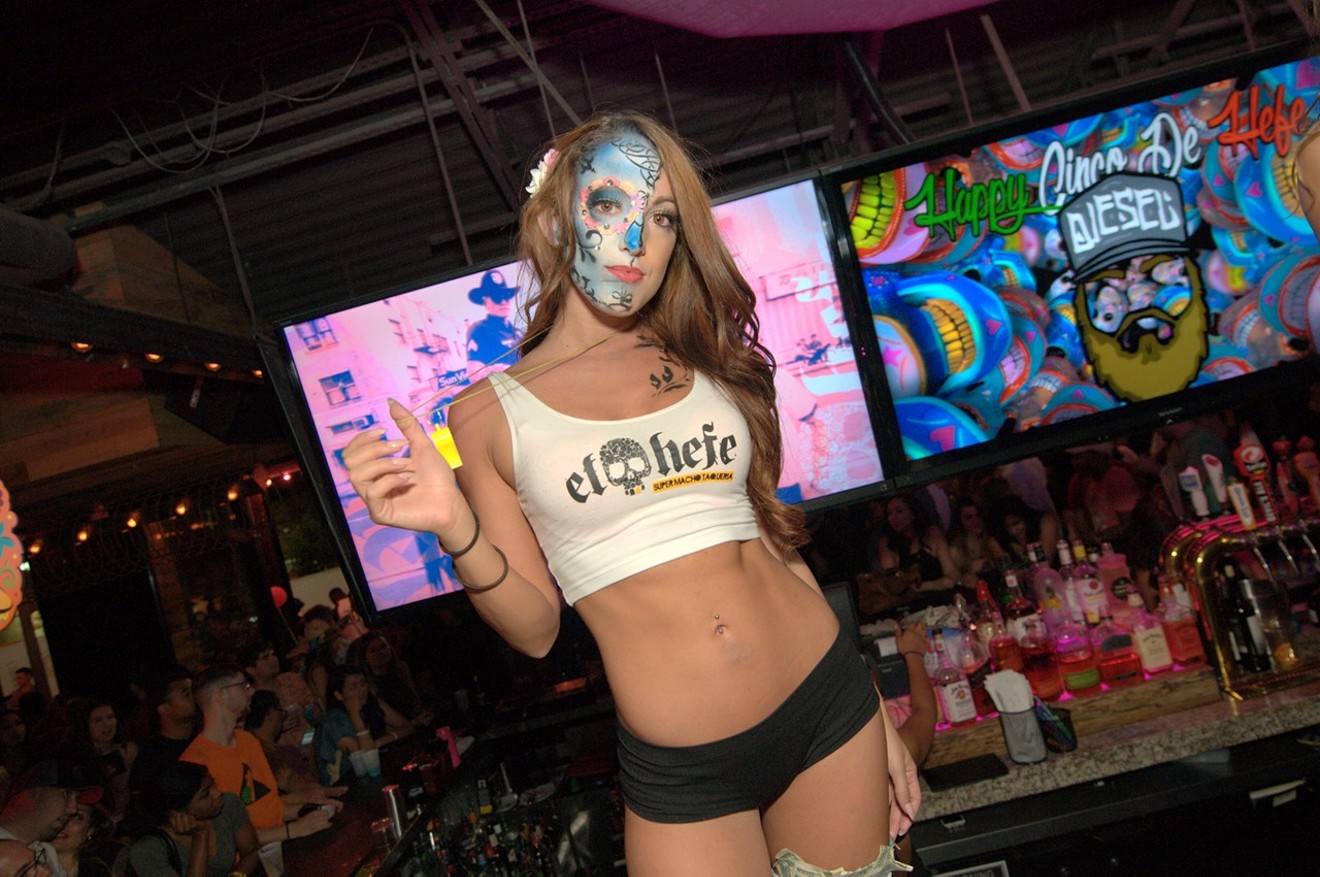 On this night, the Beergaritas were flowing, the wordless thump of EDM vibrated in the air, and as promised, a couple of Hefe Girls danced on the bar. One of the women, gyrating in hot pants and a low-cut tank top, poured a waterfall of tequila, straight from the bottle, into the gaping mouth of a young bearded dude. His friends slapped him on the back in approval, and his face took on the glow of someone who had just taken communion.

El Hefe, especially on nights like these, is a conspicuous example of a certain type of modern Mexican restaurant: loud, style-conscious, and not shy about using sex appeal to sell tacos and tequila.

“Hmmm, how can we describe El Hefe?” the restaurant’s website reads. “Think Dia de Los Muertos — but with style (and great-looking servers!)”

El Hefe and Casa Amigos aren’t the only restaurants putting “sexy” at the center of their brand, of course. Hooters brought the “breastaurant” into the American dining mainstream in the 1980s and 1990s. Similar concepts have followed suit, replicating the boobs-and-booze formula to the tune of more than $1 billion in annual sales, according to several reports.

But there’s also a whole subgenre of these kinds of restaurants — call them “Sex Mex,” if you want — that appears to be growing. There’s the Florida restaurant that describes its menu as “sexy Mexican food and craft cocktails.” The San Antonio Mexican restaurant where the all-female wait staff wear lingerie and swimwear. The Harlem taco shop, Sexy Taco/Dirty Cash, whose logo features a pinup model straddling a hard shell taco with one hand while balancing a margarita in the other.

All of which begs the question: Is Sex Mex a new trend in Mexican dining? More to the point, should it be? 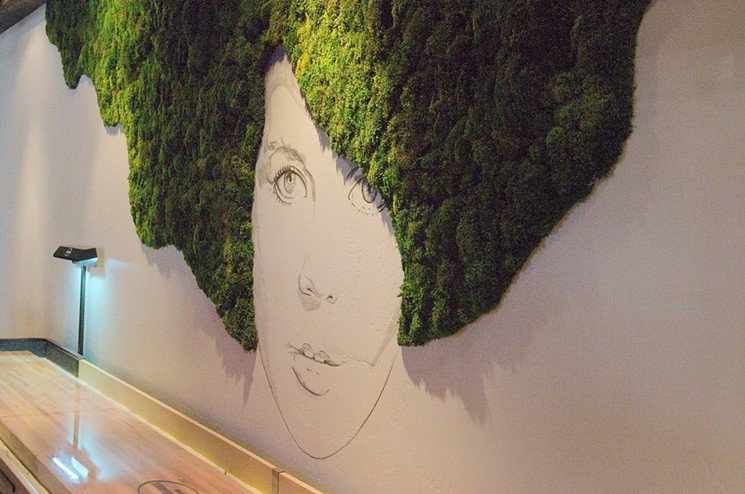 Art at Casa Amigos in Scottsdale.
Benjamin Leatherman
“Sexy, spicy — those are the kinds of words that have historically been used to stereotype Latinas,” says Dr. Meredith Abarca, an English professor at the University of Texas at El Paso.

Abarca has written extensively about the intersection of class, gender, and Mexican foodways. She’s not sure what to think about a restaurant that markets itself as “sexy” and “spicy.”

“Spicy, in the context of chiles and Mexican food history, that makes sense to me,” she says. “But when you add the word sexy, it raises a lot of questions.”

“The first thing that comes to mind is ‘hot tamale.’ The old stereotype of Latinas as hot, sizzling things.”

Hot tamale. Spicy señorita. The words invoke a dark-haired, red-lipped, hypersexual Latina woman. It’s one of the oldest and most persistent Latina stereotypes in the book. 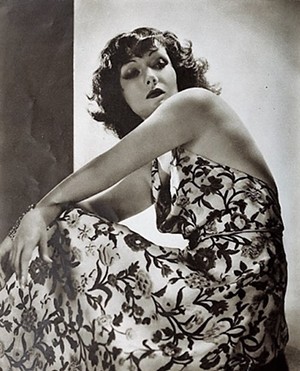 Spicy suggests someone who is alluring, but also tempestuous and childlike. To be spicy is to be a person who cannot be taken entirely seriously, and possibly shouldn’t be trusted.

It might seem like a harmless, even flattering, cliché. But tell that to Josefa Loaiza, the Gold Rush-era Californian with the dubious distinction of being what many historians believe is the only woman to be lynched and hanged in the state of California. Her crime: stabbing a man who broke into her house. Reports from the era describe her as a hot-blooded beauty. From her saga, it’s easy to imagine the terrible ways that “spicy” and “hot-blooded” can be transmuted into “crazy” — or “dangerous.” 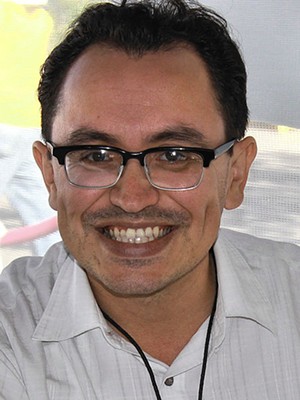 Gustavo Arellano
Larry D. Moore
How does the “spicy Latina” trope intersect with the food world, though? I asked Gustavo Arellano, whose book Taco USA: How Mexican Food Conquered America charts the intriguing trajectory of Mexican cooking in the U.S.

Arellano, famous for gleefully imploding racist stereotypes in his popular long-running syndicated column “Ask a Mexican,” says that the “spicy Latina” is a very old trope that played a big part in popularizing Mexican food in the U.S.

“It goes back all the way to the first famous Mexican restaurateurs, when they were known as chili queens in San Antonio,” he says.

Arellano devotes a chapter in his book to the story of the chili queens. These were the Mexican female cooks who set up makeshift restaurants at night in the plazas of 19th-century San Antonio. The food — which included chile con carne and tamales dished out of big pots placed over open fires — attracted curious tourists drawn to the “exotic” local dishes.

They were drawn not only by the novelty of the food, but by the “coquettish señoritas” serving it, which is how writer O. Henry describes the women in his short story “The Enchanted Kiss.”

“They were literally the first spicy señoritas,” says Arellano. “And whether they did it purposely or not, a lot of their appeal was their sex appeal.”

The chili queens may have faded from the plazas of San Antonio decades ago, but the idea of “coquettish señoritas” lives on to this day.

Before there were overtly sexual breastaurants, Mexican restaurants were adept at highlighting female sexuality, albeit in slightly more subtle ways than today’s Hefe Girls.

Like other “ethnic” cuisines angling for the American mainstream, Mexican restaurants in the latter half of the 20th century often played up the romance of exoticism, in this case the romance of “Old Mexico.” Portraying Mexican women in a certain light was a big part of that romantic image. 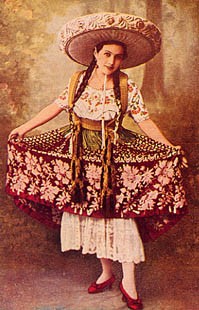 Arelleno points to the china poblana costume — a sometimes low-cut peasant dress often worn by female servers — which became a hallmark of higher-end Mexican restaurants in the latter half of the 20th century. The costume was a tangible marker that placed Latinas as exotic, sensual, and decorative.

The china poblana costume has largely been retired from contemporary Mexican restaurants. But in cities like metro Phoenix, Arellano says, Sex Mex continues in at least two different veins.

If the Scottsdale crowds have places like El Hefe, then the Mexican immigrant crowd has places like Mariscos Hector, a sexed-up Sinaloan marisquería (seafood restaurant) that’s become a mainstay of the Orange County Mexican food scene.

Mariscos Hector proudly bills itself as the “Mexican Hooters.” Unlike other breastaurants, which downplay charges of sexism by talking up the quality of their chicken wings or burgers, Mariscos Hector feels more like an oversexed bar that happens to serve seafood. The restaurant’s female servers, a curvaceous crew that serves aguachile platters with a side of earsplitting banda music, are shamelessly plugged as the restaurant’s feature attraction. (Mariscos Hector did not respond to New Times’ request for an interview.)

This type of Mexican restaurant, geared toward Mexican immigrant men, doesn’t play on racial stereotypes to appeal to a non-Mexican dining public. It relies, instead, on good old-fashioned Mexican machismo.

In the end, El Hefe and Mariscos Hector, two restaurants that ostensibly seem worlds apart, feel a little like kindred spirits. Beneath Hector’s thunderous banda music, and El Hefe’s thumping EDM soundtrack, you can hear both speaking the universal language of sexism. 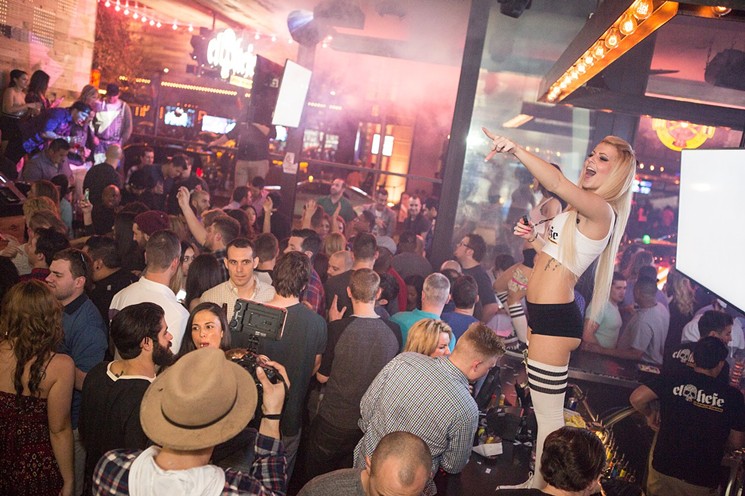 “Sexy” has become a popular — and, arguably, overused and confused — marketing and design term, a catchall for anything meant to be understood as youthful, deluxe, or stylish. I suspect that’s what places like Casa Amigos have in mind when they talk about a “spicy, sexy” Mexican restaurant.

But sexy, when it’s expressly describing a sexually charged restaurant environment — well, that can be problematic, Abarca tells me.

Hyper-sexualized work environments, like those found in some restaurants, shape the “bigger picture” of society, she says. They reflect the balance of power in the world — one that often belongs to powerful men.

“With all these accusations we keep hearing about ... men who feel like they can do whatever they want — this is just another way in which, systematically, women are stereotyped and objectified,” she says.

No matter what is meant by using the word “sexy,” though, using sex appeal to sell Mexican food, even on the broadest terms, inevitably evokes more than a century of racist and sexist stereotypes — cue the hot tamales, hot-blooded chicas, and loud, vapid bombshells.

And it’s worth noting that cheerfully branding Mexican food as “sexy” or “fun” or “spicy” exoticizes a food culture that is not exotic. Mexican food, in case you haven’t noticed, has been around these parts for quite a while. It’s as American as apple pie, or Taco Bell.

“Mexican food now is so popular,” Arellano tells me. “You really don’t need sex appeal to sell it anymore.”

That kind of clear-eyed assessment still seems lost on some restaurateurs, though, who continue to lean on hackneyed concepts to sell food and drink. Why not, instead, focus that energy on making great food?

It’s hard to ignore, too, how disingenuous, tone-deaf, and unwelcoming these kinds of restaurants can feel.

Proclaiming that your Mexican restaurant is like Dia de Los Muertos, for instance — but with more style and great-looking servers — underlines a fixation with style over substance, and a lack of respect for the culture that’s helping put dollars in your pocket. And hiring only “sexy chicas” to serve food? It’s a surefire way to shut out a big part of the dining public.

“Sex and food, that’s not a new connection,” says Abarca. “But it’s interesting that it’s being used so boldly by restaurants.

“The question remains, who are they hoping to attract?”