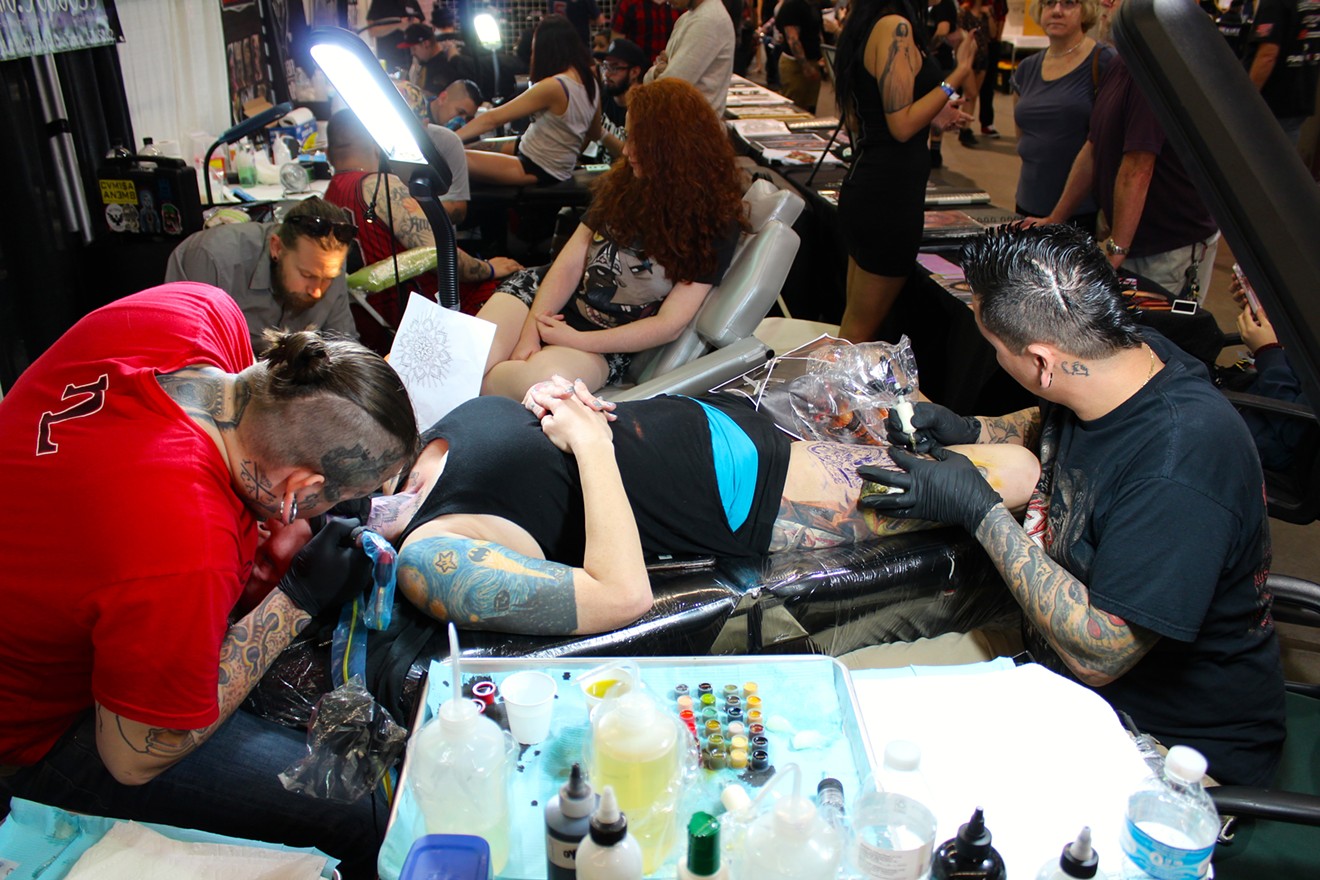 A brave patron at the Phoenix Body Art Expo opts to get two tattoos at once on the front of the neck and inner thigh. Both skin spaces are sensitive areas. Justin Criado
Tattoos are a public personal decision. A lot of time goes into selecting the right composition, art, and artist. The whole process is filled with patience and pain, as anything worth having on your body until death must be thoroughly though out and earned, in a sense.

Since the turn of the century, body art has become more widely accepted across all professions and platforms. So nowadays, it’s not too unusual to find out the IT guy has a full chest piece and the receptionist at the doctor’s office has an affinity for floral tattoos.

With such acceptance of self-expression and so many professional practitioners, tattoos have broken into popular culture.

Below are some skin industry trends we spotted during the Phoenix Body Art Expo at the Arizona State Fairgrounds. 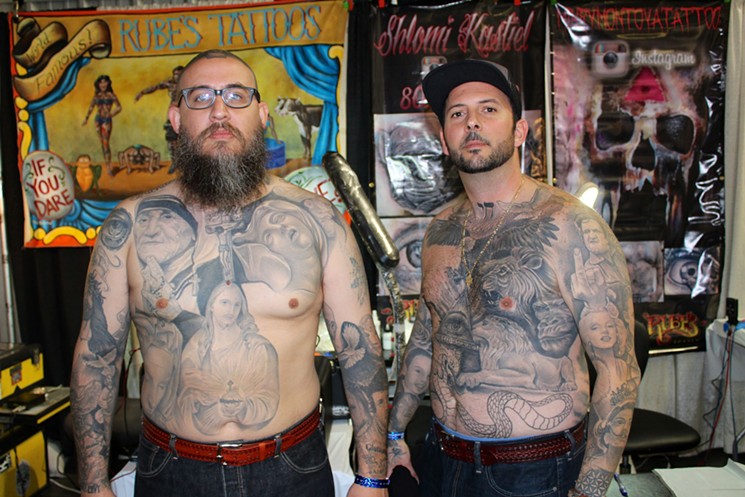 Juice, left, and Shlomi Kastiel of Rube's Tattoo in Arcadia, California, show off their black and white portraits done by coworker Mikey Montoya.
Justin Criado
Black-and-White Portraits
Mikey Montoya of Rube’s Tattoo in Arcadia, California, explains that the most popular tattoo type he’s seen recently is black-and-white portraits. The style mixes several aspects of tattooing, including realism and line work. Montoya says such portraits have always been big in Cali, but now he’s seeing them gain popularity across the Southwest. Portrait pieces can depict famous figures, religious idols, animals, or family members. Among the black-and-white portraits we saw at the Body Expo were such famous monsters as Boris Karloff’s Frankenstein character and the latest representation of the Teenage Mutant Ninja Turtles. Kowabunga! 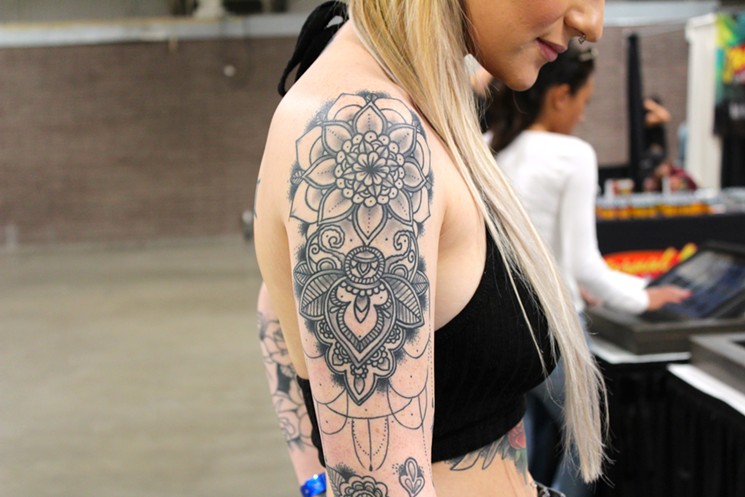 Kris Nelson shows off her underbust tattoo by Sam Corser of 2nd Street Tattoo in Prescott Valley.
Justin Criado
Underbust Tattoos
There are some places on the body that produce more pain when a needle is continuously jabbed into it than others. The area between one's chest and abdomen, we imagine, is one of them. The underbust tattoo is a permanent corset of sorts, with the final presentation accentuating an area often overlooked when considering tattoo placement. The underbust area itself is more popular than a particular style. Edges of such a tattoos were seen sneaking out from under halter tops at the Body Expo, and included geometric or filigree-esque line work. Artist Matthew Cordova's locket-sized portrait of his mother on his upper jaw.
Justin Criado
Face Tattoos
With more tattoo acceptance comes more comfortability with where a tattoo can go. Creeping from the collar line, tattoos on the neck and surrounding area used to be the most extreme showing of ink allegiance. But within the past few years, the face has topped the neck as the most hardcore spot to get tattooed. Whether it’s under the eye, along the jawline, or on the temple, tattoos on the face and head may be the boldest proclamation of one’s love for body art. Designs are often simple out of necessity since they have to go on smaller spaces. Artist Matthew Cordova of Aspired Ink (Orange County, California and Albuquerque, New Mexico) has a locket-size portrait of his mother on his upper jaw. “That’s his mom, bro. He loves showing her off,” coworker Dillon Giarraffa says. Artist Dillon Giarraffa shows an example of a skull-clock morph he did.
Justin Criado
Morphs
Experimentation can lead to innovation or absurdity. (See: Taco Bell’s Naked Chicken Chalupa and the Snuggie.) The tattoo industry is an artistic one, with professionals working towards perfecting their craft and carving their own path. Styles blend into one another, which is where morphs come from. A morph tattoo, in the simplest terms, is when one object becomes another. Snapshots of such a transition can be captured in tattoos in the form of a pin-up girl bending backwards to form a skull or flames turning into wolves’ heads. Giarraffa say he’s been doing a lot of roses and skulls, but morph requests are becoming more common.