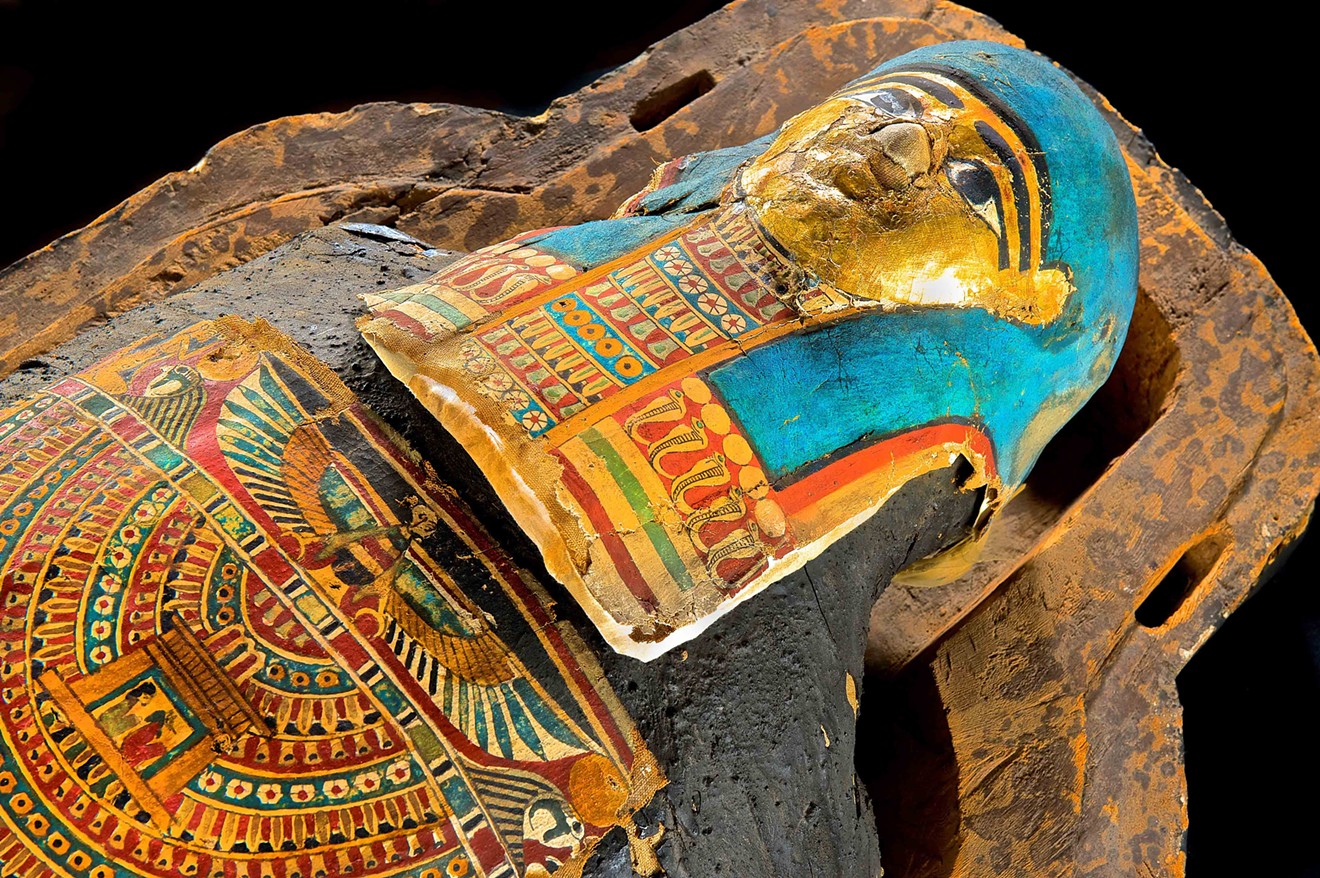 Many ancient Egyptian mummies and artifacts will be on display at "Mummies of the World." Courtesy of the Arizona Science Center
If you thought mummies were just a part of ancient Egyptian culture, you’re dead wrong. Mummies are found all over the world — and they’re not just limited to humans. The Arizona Science Center’s latest exhibit, “Mummies of the World,” lets visitors come face-to-face with 40 human and animal mummies from around the globe, all without leaving Phoenix.

Matthew Schwartz, director of exhibits at the Science Center, says this mummy exhibition is unique because they have such a large variety of mummies, unlike other exhibits that choose to focus on just one. They also know a great deal about each mummy’s background.

“We know a lot of history about the actual people and their circumstances before they died,” Schwartz said. “We’re also interested in using the mummies to examine their culture and their history.”

People tend to think about the intentional mummification of living beings, but it can also happen unintentionally. One of the mummies on display is German nobleman Baron Von Holz, who died during the Thirty Years’ War and was accidentally mummified in his family crypt.

“What if you get flowers for Valentine’s Day and you dry them out?” Custer says. “Desiccating them is actually preserving them — mummification.”

The newest mummy at the exhibition was mummified in 1994 for scientific research purposes. The University of Maryland studied ancient Egyptian mummification processes and replicated it on a donated body. MUMAB, the mummy’s nickname, will be on display as part of the exhibition.

“We’ve only had a couple decades so far with that one, where some mummies have held up for thousands of years,” Custer says. “They continue to learn a lot from that particular mummy.”

There will also be plenty of animals on display, from a lizard to a baby crocodile. In ancient Egypt, animals were often intentionally mummified to accompany humans into the afterlife.

Visitors can see MUMAB, a mummy created in 1994 using ancient Egyptian mummification processes, at "Mummies of the World."
Courtesy of the Arizona Science Center
This mummy exhibit has similar themes to one of the Science Center’s previous exhibits, “Pompeii: The Exhibition,” that was on display a year ago. Schwartz saw the immense success of that exhibit and wanted to bring another artifact-based display that sparked scientific curiosity to Phoenix.

“'Pompeii' was an extremely popular exhibit,” he says. “We really liked the intersection of the science and the culture, the historical artifacts, and how we could look at the science angle of those really important historical events.”

“It has a touch component so that you can feel what mummified skin feels like,” she says.

Custer hopes the mummy exhibition will break through common stereotypes people have about mummies while creating valuable learning opportunities on how they're made, as well as the cultural history behind each one.

“I think there is a lot of opportunity for investigating our own curiosity and wonder, and also to keep asking more questions,” she says.

"Mummies Of The World." Sunday, February 10, to Monday, September 2, at Arizona Science Center, 600 East Washington Street; 602-716-2000; azscience.org. Tickets are $11.95 for adults and $9.95 for children in addition to regular museum admission, which is $18 for adults and $13 for children. Purchasing advance, timed-entry tickets at azscience.org is strongly encouraged.
KEEP PHOENIX NEW TIMES FREE... Since we started Phoenix New Times, it has been defined as the free, independent voice of Phoenix, and we'd like to keep it that way. With local media under siege, it's more important than ever for us to rally support behind funding our local journalism. You can help by participating in our "I Support" program, allowing us to keep offering readers access to our incisive coverage of local news, food and culture with no paywalls.
Make a one-time donation today for as little as $1.
Megan Marples