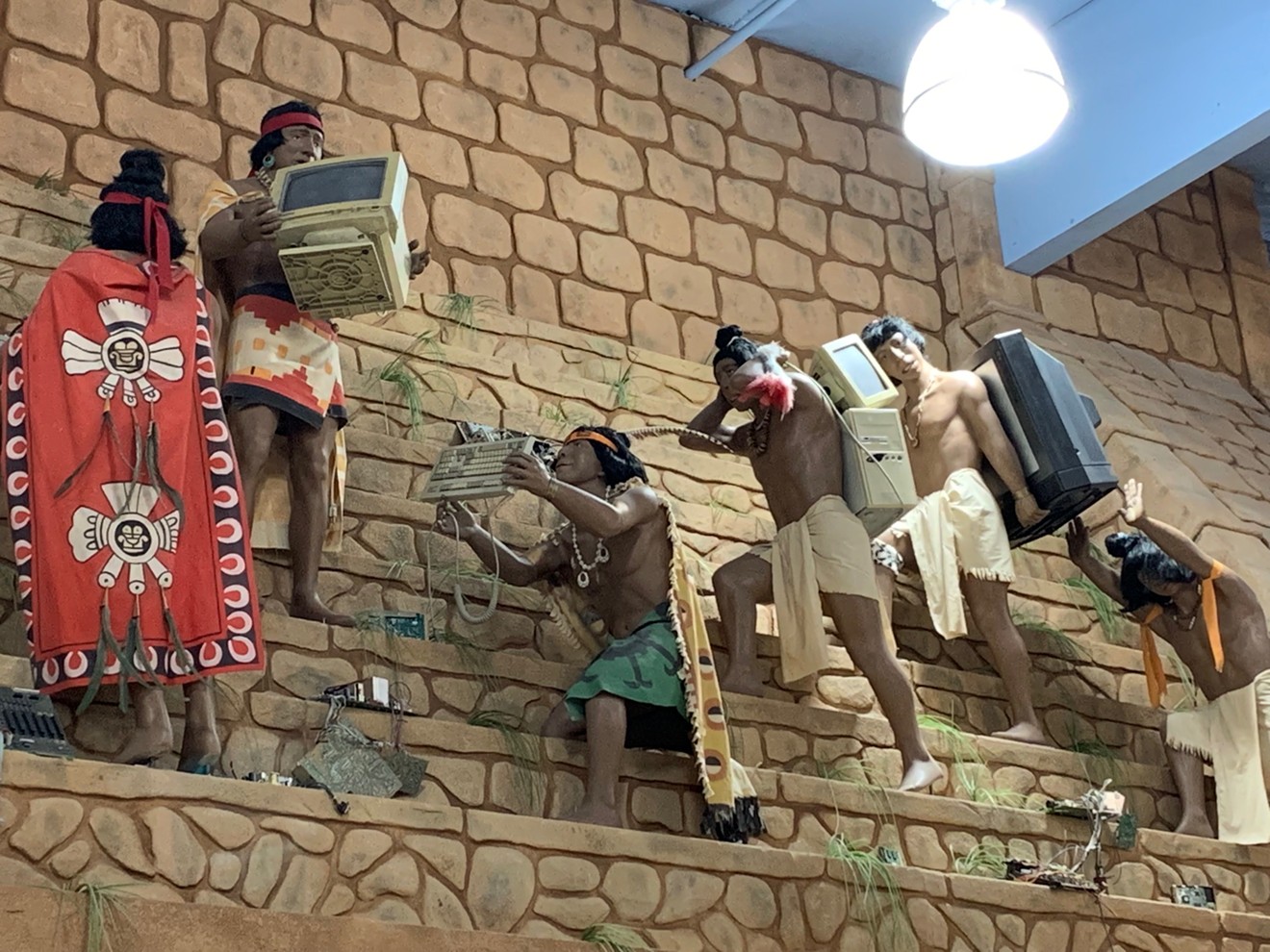 The manager of Fry’s Electronics on Thunderbird Road was always surprised when people didn’t notice that the store was Aztec-themed. “The very front of the store has two giant dragons,” Dylan Dalzell said last Wednesday afternoon, then shook his head in disbelief. “And all the signage is done in Aztec lettering.” He was standing alongside a Styrofoam pillar made to look like Aztec stone. Nearby, a towering display of Diet Pepsi loomed.

Dalzell is, he said, an archeology buff. “I’m pretty sure there were no Aztecs here in Arizona. I grew up in Michigan, but I went to school to be an archeologist, and I just kept working here at Fry’s. I made far more money here in sales than I ever would as an archeologist, so I figured I’ll do that later when I’m older,” the 43-year-old explained.

It has been 25 years since he’d studied archeology, but he thought the peninsula that comes down around Mexico is where the Aztecs were. “I think,” he deferred.

Just past a row of Aztec-themed arcade games, a row of 16 palm trees lined the entryway into the store. The question customers asked most often was whether the trees were real. They looked like they were growing out of the tile floor, Dalzell pointed out, but they were mostly palm bark glued to some kind of resin or something.

“If memory serves me, the two dragons out front are from the Quetzalcoatl,” Dalzell said. “Something like that. It’s a big giant long name, and that’s what the dragons are from. There’s another dragon over there,” he pointed toward a doorway shaped like a wide, scaly mouth. A sign above it read “Listening Room.”

“It’s supposed to look like you’re going into a temple or something like that,” he said, then pointed to the brightly colored ceramic-tiled floor. “Right here is the Aztec calendar. This is probably the high point of the store, the thing that most people are attracted to. They stop here and take pictures.”

Above him, near the ceiling, were Aztec carvings that accompanied the ceramic floor calendar. “Each one represents a month or a season or something like that,” Dalzell explained. He wasn’t sure what the faux stonework was made of. There was a great deal of it, some of it mounted with taxidermized wildlife.

“That’s a leopard,” he said, pointing to a large cat scaling the entry to the store’s café, a pile of fake rocks and rubber plants situated in the center of the store. “It’s only open during lunch hours. They serve sandwiches, nachos, movie theater kind of stuff. People come to this store for lunch.”

The owners of Fry’s wanted all their stores to be unique, Dalzell said. Each of the 34 locations has a different theme, based on something the area is known for. “Our Houston location is our NASA store. They have a mockup of the space shuttle with jet engines. Every hour it goes through a launch sequence. The store rumbles and makes a lot of noise.”

The other Fry’s are much quieter, Dalzell said. “In Burbank, where all the 1950s science-fiction movies were made, they have a big flying saucer crashing through the front of the store. They have the big giant robot from The Day the Earth Stood Still in the middle of the floor. And our Woodland Hills location, that’s an Alice in Wonderland-themed store, so they have like the queen of hearts with all the cards flying around.”

Special effects designer Eric Christensen oversaw the design of the Phoenix store, which opened in November of 1999. “It’s Aztec-themed because this is the Valley of the Sun,” Dalzell figured, “and the Aztecs worshipped the sun.”

The back wall of the store featured a diorama of life-sized mannequins dressed in Aztec costumes, sacrificing outdated electronics to an unseen god. “The Aztecs made blood sacrifices,” Dalzell said. “So these guys are offering up an old computer monitor and a pre-flat-screen TV. The guy with the leopard cape is sacrificing a Sony Walkman.”

The chain is owned by the Fry family, who used to own Fry’s Food and Drug. After they sold the grocery chain to Kroger in 1980, Dalzell said, they opened a store in Silicon Valley. “It was supposed to be a one-stop shop for all the techies who lived there at the time. On one side they sold microprocessors, resistors, capacitors, the small stuff for engineering computers. And then the other side was all your groceries: milk, cereal, fruit.”

The Fry family soon realized the only groceries they were selling in Silicon Valley were chips and soda. “Because their customer was techies,” Dalzell offered. “Not the kind of people who were shopping for stuff to make spaghetti for dinner.” Today, where groceries are concerned, Fry’s Electronics sells only snack food.

On this day, they weren’t selling much of anything. Employees wandered past rows of half-empty shelves. A clerk stopped to straighten a line of cologne bottles near a mostly bare endcap stacked with clearance DVDs.

“We’re going through a big inventory reorganization,” Dalzell said about the empty shelves. “We’re converting the stores to more of an online thing, to be competitive. Right now, we’re shifting a lot of things to make room for some other stuff that’s coming in.”

A customer entered and stopped in the corridor of palm trees. “Do you work here?” she asked a man who was carrying a bag of Doritos to a long row of silent cash registers. “I need to talk to someone about how they get these trees to grow out of the tile like this.”
KEEP PHOENIX NEW TIMES FREE... Since we started Phoenix New Times, it has been defined as the free, independent voice of Phoenix, and we'd like to keep it that way. With local media under siege, it's more important than ever for us to rally support behind funding our local journalism. You can help by participating in our "I Support" program, allowing us to keep offering readers access to our incisive coverage of local news, food and culture with no paywalls.
Make a one-time donation today for as little as $1.