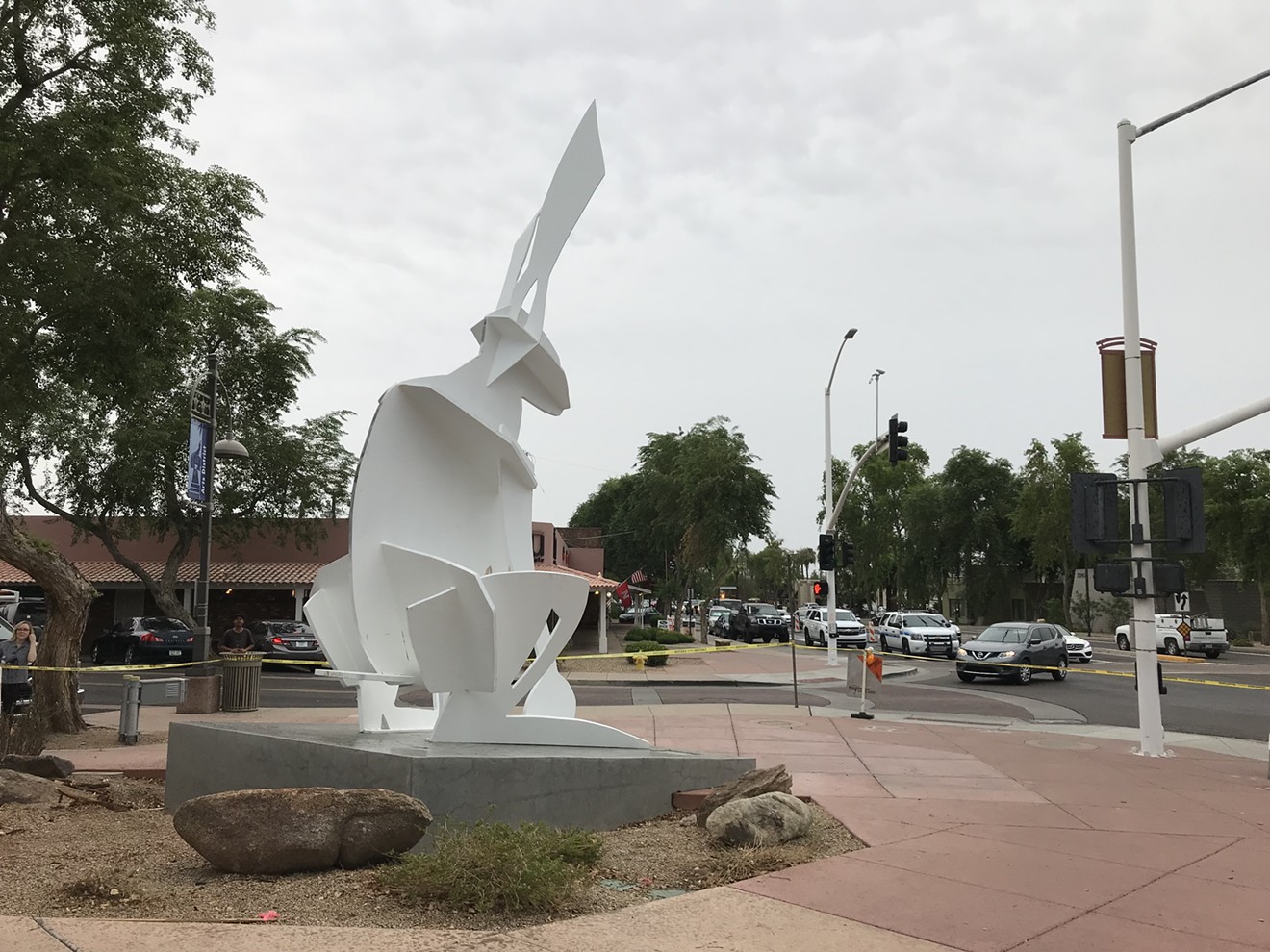 One-Eyed Jack on installation day, before John Randall Nelson added finishing touches on-site. Lynn Trimble
After years of controversy, John Randall Nelson’s giant rabbit has finally gone up in Scottsdale. The 26-foot-tall sculpture was installed on the northwest corner of Indian School Road and Marshall Way on Wednesday, September 19. Titled One-Eyed Jack, it comprises a white rabbit sitting on its haunches, with both ears jutting up towards the sky.

It’s been three years since Nelson was shortlisted for the Scottsdale Public Art project, along with two artists from other states who’d also responded to the public call for art. At first, he pitched creating a series of word sculptures with salvaged letters, featuring A-R-T-S and other G-rated four-letter words.

But that never happened, because another artist got the commission. Turns out, their design didn’t work in the designated space, so Nelson got another shot at it. That’s when he proposed the rabbit idea, inspired in part by the rabbit’s long history in art as a symbol of magic, transformation, and intuition.

In September 2016, Scottsdale Public Art held an open house to share Nelson’s rabbit design and gather public feedback. Eighty-three people completed the survey asking for their input, and 78 of them expressed their support.

Early morning look at One-Eyed Jack, before John Randall Nelson did some finishing touches.
Lynn Trimble
Even so, Nelson’s plan had some naysayers.

Some sat on the city’s design review panel tasked with approving his design. “I heard people say everything from 'It’s a humping rabbit' to 'It’ll give kids nightmares,'” Nelson says. “And some people just don’t like public art.”

"I’ve produced over twenty public art works in six different states over the last twenty years, and almost every one has had some delays, design changes, or budget issues," Nelson says. "Every public art project is political in so far as the budget is often taxpayer funded, so in some ways this piece is like so many others that I’ve worked on."

In Scottsdale, even Nelson's proposed titles drew criticism. He nixed the title Jackalope after someone stated strong opposition, and the title Black-Tailed Jack as well, which referenced a species of hare common in the Western U.S. and Mexico. In the end, Nelson settled on One-Eyed Jack, which plays on Old Town Scottsdale’s Wild West aesthetic.

For some people, the rabbit's planned location was the issue. Early on, the sculpture was designed to sit closer to the curb. Some objected on the grounds it would impede sidewalk traffic, or put kids at risk if they ran across the street to see it. The sculpture’s material drew criticism as well, from those who worried the metal surface would burn people who touched it. That's part of the reason Nelson went with painting it white.

Nelson worked with Scottsdale Public Art to address the placement concerns, suggesting they set the sculpture farther back from the curb. And they raised the height of the sculpture’s base, making it less likely children would try to climb on the artwork. Still, the design review board voted against the design in December 2017. “That almost killed the whole project,” Nelson says.

In the end, they went directly to the city council, which has the power to overrule the design board. In February, all but one city council member voted to approve the design, which meant the project could finally move forward. The concrete platform underneath the sculpture went in during August, then cured for several weeks before the rabbit was installed atop it. 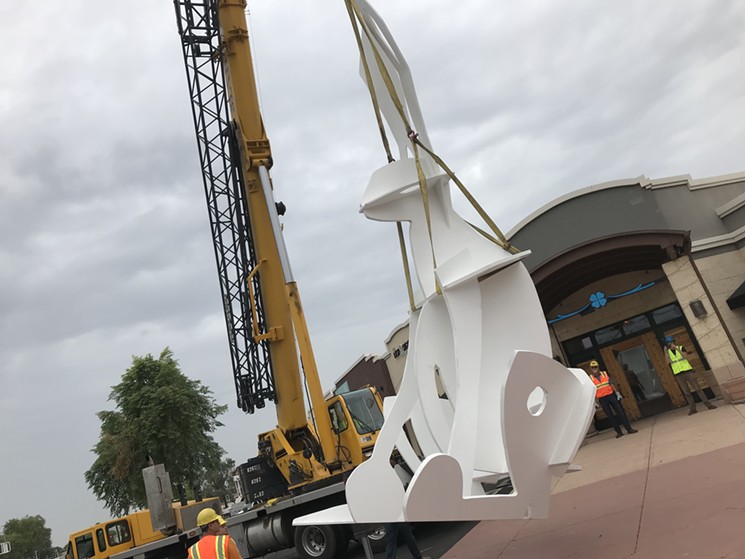 One-Eyed Jack making the journey from flatbed truck to sidewalk on September 19.
Lynn Trimble
The sculpture traveled on its back by oversized flatbed truck from R.J. Ruff & Company in southwest Phoenix, where it was fabricated, to Old Town Scottsdale, the morning of September 19. The sculpture weighs about 20,000 pounds, which means it had to be lifted from the truck by crane, then carefully moved to the platform. More than a dozen people looked on as it was slowly lowered into place during a light midday rainstorm.

“It was touch and go even when we installed it,” Nelson says. “This is the first time it’s been upright since we put the ears on.”

Nelson returned before sunrise on Thursday, September 20, to do some final painting on the piece. It’s the first time he’d seen it with the lighting, installed in the base and shining upwards on the rabbit’s geometric shapes. “We’ll play with the lighting a bit down the road, so sometimes you might have a pink rabbit or a blue rabbit,” he says.

Now that One-Eyed Jack is installed, Nelson can look forward to the official celebration Scottsdale Public Art is presenting on Thursday, October 25, which will include a reading by Alberto Rios, the state’s inaugural poet laureate.

“I’m relieved,” Nelson says of finally getting the rabbit installed. “It certainly has presence, and I really hope it gives people a sense of wonder.”

One-Eyed Jack Celebration. Thursday, October 25, from 6 to 7 p.m. at Blue Clover Distillery, 7042 East Indian School Road, Scottsdale. John Randall Nelson will be available for a meet and greet from 5 to 6 p.m. at Gebert Contemporary, 7160 East Main Street. Free admission; scottsdalepublicart.org.
KEEP PHOENIX NEW TIMES FREE... Since we started Phoenix New Times, it has been defined as the free, independent voice of Phoenix, and we'd like to keep it that way. With local media under siege, it's more important than ever for us to rally support behind funding our local journalism. You can help by participating in our "I Support" program, allowing us to keep offering readers access to our incisive coverage of local news, food and culture with no paywalls.
Make a one-time donation today for as little as $1.