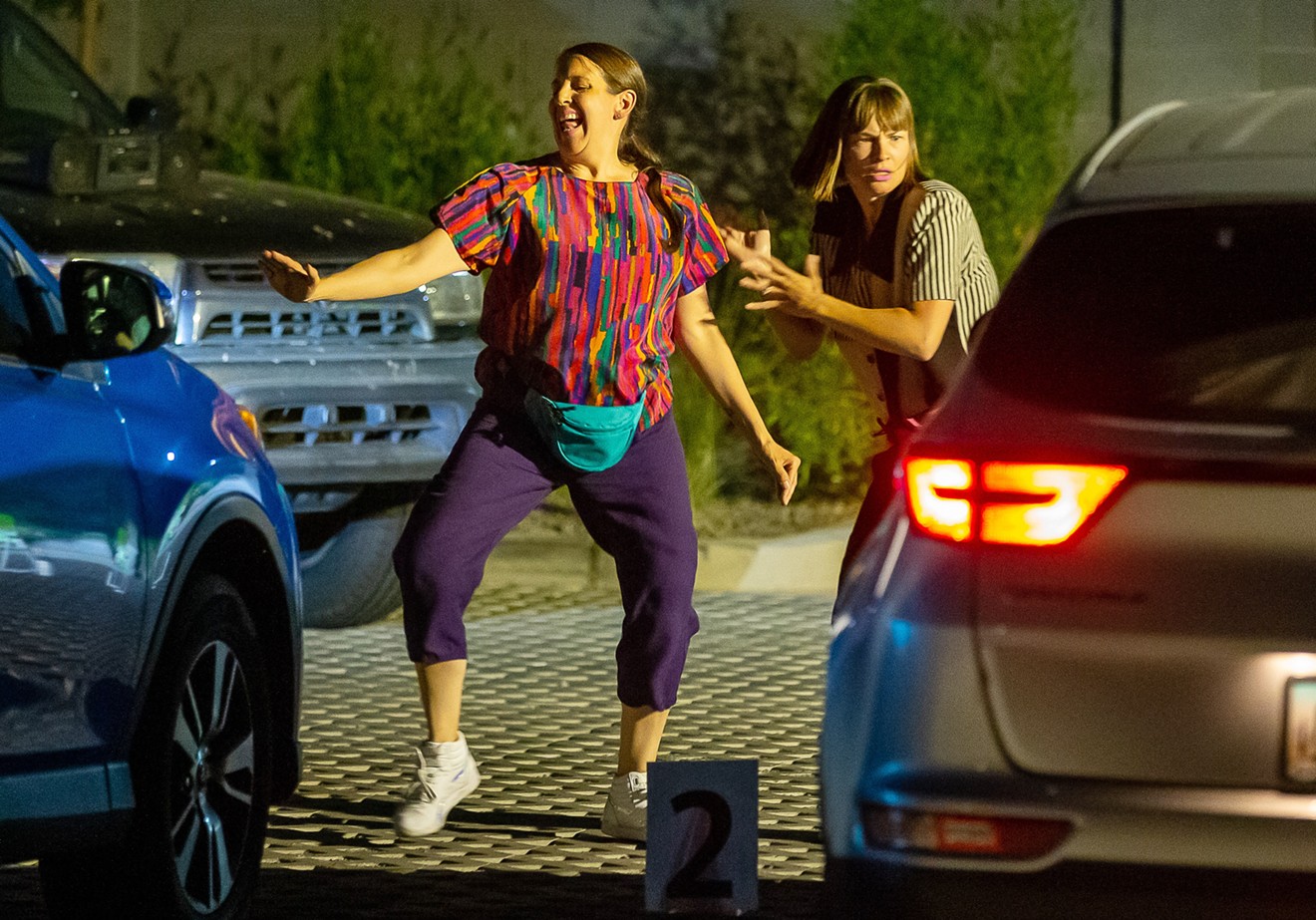 Leanne Schmidt (left) and Marlene Strang (right) perform as The Ladies. Michael Simon
When the going gets tough, the tough try thinking outside the box. We’ve all had to adapt to the COVID-19 outbreak, and some have come up with unique, unusual, and ingenious solutions to do so. (After all, it's not like drive-by birthday parties or stripper food deliveries were ever a thing before March.)

Here in the Valley, the culture scene has found a few ways to deal with the realities and restrictions of pandemic life and still reach their audiences. One option is having people stay inside their cars.

Right now, a few local artists and attractions are offering drive-in or drive-thru experiences where patrons can stay socially distanced behind their steering wheels and still partake in the fun.

Over at the Phoenix Zoo footpaths have been transformed into roadways where the public can get an eyeful of its bestiary. It’s part of “Cruise the Zoo,” which takes place the first Thursday through Monday of June, July, and August. Hours are 7 a.m. to noon.

Vehicles follow a self-guided route of the facility, adhering to a speed limit of 4 m.p.h. and navigating both the Tropics and Africa trails. Visitors pass enclosures for orangutans, elephants, jaguars, flamingoes, and other creatures. (But don’t blast your horn in excitement when seeing your favorites, since it disturbs the animals.)

The trip lasts 30 minutes and an optional audio tour providing information and insight about each animal along the way can be downloaded from the Phoenix Zoo’s website. Tickets are $50 per vehicle for zoo members, $65 for the general public. You’ll want to get yours soon, as they’re reportedly going fast.

Out of Africa Wildlife Park up in Camp Verde offers a similar drive-thru experience. Visitors can embark on a personal safari (minus the pith helmet and jodhpurs) while navigating the attraction’s vast wildlife preserves every Tuesday and Wednesday from 9:30 a.m. to 4 p.m. Out of Africa offers drive-thru encounters with big cats.
marada/CC BY-ND 2.0/Flickr
The tour includes the Masai Mara region of Kenya and the Serengeti of Tanzania, where native African animals like hyenas, zebras, and wildebeests are accessible for close encounters.

Fierce and furry creatures from our neck of the woods — black bears, javelinas, and gray wolves — can also be found lurking in their own areas.

Staff members will be stationed at each habitat to share knowledge of the park’s animals, including its collection of lions and other big cats. Before you ask: Yes, they have tigers, and no, Out of Africa has zero affiliation with Joe Exotic. Admission is $20 per adult, $10 for kids 3-12.

You’ll find characters just as colorful as the whack-a-doodle Tiger King star, only way more wholesome, at the next drive-in performance by the Adult Puppet Slam. And if it’s anything like the last one, it should be a memorable time.

On May 16, the nonprofit theater in downtown Phoenix put on a special drive-in edition of its Puppets vs. DJs show. A quirky cast of puppets danced and frolicked to exotic global sounds and electronic deep cuts spun by Djentrification during back-to-back shows. (Picture an Animal Crossing dance party starring Muppets with a soundtrack by Billy Daniel Bunter.) A cowgirl kitten named Daisy bobbed to thick tropical beats. A mermaid marionette cavorted with a puppy to worldbeat-infused lounge rock. An enormous spiky lizard got freaky as vibrant disco-esque tunes played.

It was Adult Puppet Slam’s first gig since COVID-19 hit in March, and the gleeful mashup of artistry and music felt cathartic after two months in quarantine.

According to Adult Puppet Slam’s Facebook, future drive-in shows may happen again in the coming months. Nothing’s been announced as of yet, but you can check their social media for details when they’re available. 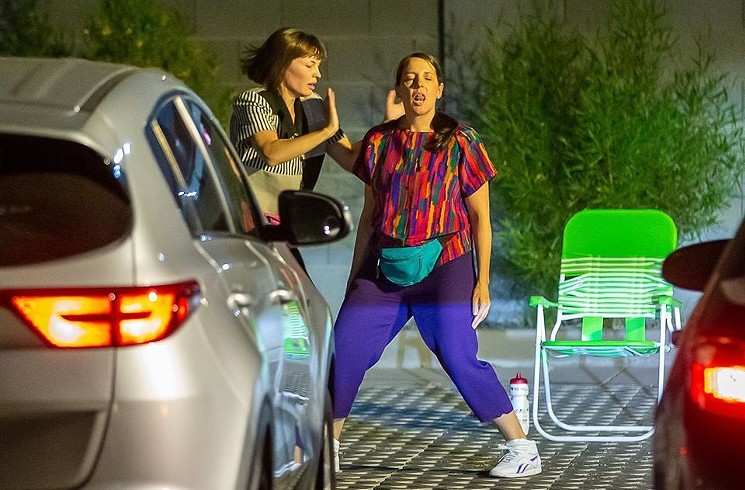 Ladies in the Headlights

You should also keep abreast of when local comediennes Leanne Schmidt and Marlene Strang will be performing again as The Ladies. The two-woman act blends performance art, physical comedy, and interpretive dance with a dash of suburbanite schmaltz, and in doing so are creating immersive shows in public spaces that are unlike anything in the Valley.

The pair portrays two ’90s homemakers. They engage in hyperactive jags of prancing, awkward movements, and audience interaction while channeling the ennui and anxieties of motherhood. (It’s like Karens Gone Wild.) And if you attend, you’ll probably be approached to join the show.

Lately, they’ve taken to local parking lots for the pandemic-inspired Ladies in the Headlights show, where the setup is as unusual as their performance. Ticketholders are given 24 hours’ advance notice of the venue location. The 15-minute shows are illuminated by the audience’s high beams. A soundtrack of mellow jazz and uptempo plays over 88.1 FM while the pair dance around lawn chairs and pantomime a hand-washing routine as a narrator describes their inner musings.

Their next performances happen at 8 and 8:30 p.m. on June 6 and 13 and tickets are $19.99 at The Ladies' website. Expect the unexpected, which is an obligatory mantra for current times.
KEEP PHOENIX NEW TIMES FREE... Since we started Phoenix New Times, it has been defined as the free, independent voice of Phoenix, and we'd like to keep it that way. With local media under siege, it's more important than ever for us to rally support behind funding our local journalism. You can help by participating in our "I Support" program, allowing us to keep offering readers access to our incisive coverage of local news, food and culture with no paywalls.
Make a one-time donation today for as little as $1.