Here's Your Guide to November First Friday in Phoenix

Be sure you check out the title of this piece at Cobra Flute Studios. Malena Barnhart/James Bewley
Pace yourself, art lovers! November First Friday will soon be upon us, and you’ll have well over a dozen fresh shows to choose from. We’ve organized your options by region to help you see more art during just a few hours. And we’ve included a roundup of places where you can enjoy both visual and performing arts – including live music, dance, poetry, and film.

Cobra Flute Projects is presenting works by artists who have at least one thing in common. Fellow artist Bill Dambrova credits each one with helping him to loosen up a little, a process that’s been increasingly reflected in his paintings. Featured artists include Malena Barnhart, Turner Davis, Dain Gore, Beatrice Moore, Randy Slack, and many more. First Friday hours are 6 to 10 p.m.

Dozens of artists will be showing works at Unexpected Art where First Friday hours are 6 to 10 p.m. Featured artists include Gino Belassin, Joshua Dopp, Sue Meyers, and Nick Rascona.

Head to {9} The Gallery to explore paintings by artist and musician Jenny Jarnagin, whose abstractions of landscapes are heavily influenced by the red dirt she recalls from early days spent in Oklahoma. First Friday hours are 6 to 10 p.m.

Checking out the detail in Niki Woehler's work.
FOUND:RE Phoenix

“A Little Bit of Me”
FOUND:RE Phoenix
1100 North Central Avenue

Artist Niki Woehler will be showing abstract figurative works created using materials including acrylic paint and resin. The artist uses variations of texture and color to explore a wide range of human emotions. First Friday hours at FOUND:RE Phoenix are 6 to 10 p.m.

Head to At Central Gallery inside Burton Barr Central Library to explore creative altars honoring and celebrating the lives of public figures, friends, family members, and fellow community members who’ve passed. They're made by artists such as Jeff Falk. First Friday hours are 6:30 to 8 p.m.

Head to HOSH Gallery inside Palabras Bilingual Bookstore to see works by Miguel Ibarra. They explore art as a means of facing anxiety and depression. The Phoenix artist, whose works often include symmetrical designs, is heavily influenced by street art and street culture. The Crate Creepers, a vinyl record collective, will spin tunes. And a plant-based pop-up restaurant will be on site. First Friday hours are 6 to 9 p.m.

Taking shapes as a starting point, artists Abe Zucca and Pete Petrisko have created works for a new exhibition featuring paintings and digital collages. The evening includes sound art rooted in sonic geography. A 45-minute program by Media Patros will play at 7 p.m., 7:45 p.m., and 8:30 p.m. inside Abe Zucca Gallery.

See artworks created by people living with Parkinson’s, as well as their care partners, during this exhibition at Olney Gallery. First Friday hours are 6 to 9 p.m. Live performance includes a percussion ensemble at 5:45 p.m. and vocal performance at 7:30 p.m. Muhammed Ali Parkinson Center choirs will perform at 6:30 p.m.

You can explore artwork and poetry by Eden McNutt at Grand Avenue Records, where the lineup also includes instrumental vibrations by musicians Barry Moon and Doug Nottingham. First Friday hours are 6 to 10 p.m. 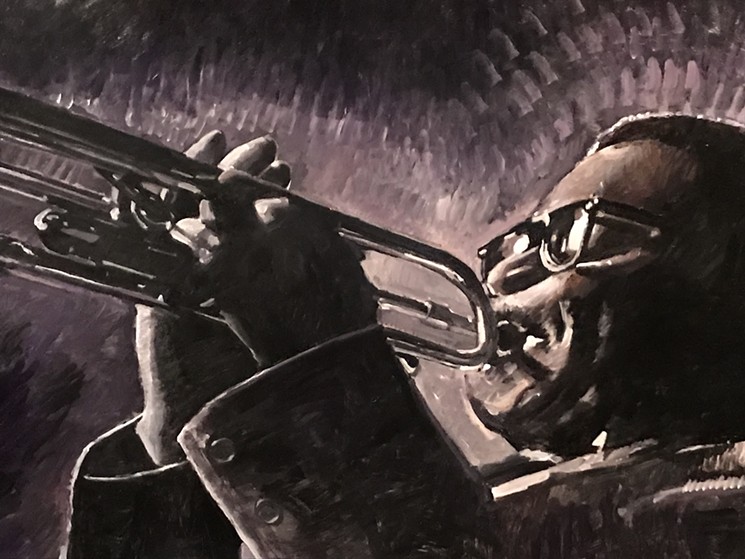 One of many Abe Zucca paintings we've spotted at The Nash.
Abe Zucca/Photo by Lynn Trimble
First Friday
The Nash
110 East Roosevelt Road

The Nash is presenting a free concert by the Raúl Yuñez Quartet, which starts at 7:30 p.m. on First Friday. While you’re there, look for portraits of jazz greats painted by Abe Zucca.

See how the Yosemite landscape influenced work by David Hockney and indigenous basket weavers, during free First Friday hours from 6 to 10 p.m. at the Heard Museum. The evening also includes live-weaving and iPad drawing demonstrations. See live dance performance at 6:30 and 8 p.m.
KEEP PHOENIX NEW TIMES FREE... Since we started Phoenix New Times, it has been defined as the free, independent voice of Phoenix, and we'd like to keep it that way. With local media under siege, it's more important than ever for us to rally support behind funding our local journalism. You can help by participating in our "I Support" program, allowing us to keep offering readers access to our incisive coverage of local news, food and culture with no paywalls.
Make a one-time donation today for as little as $1.