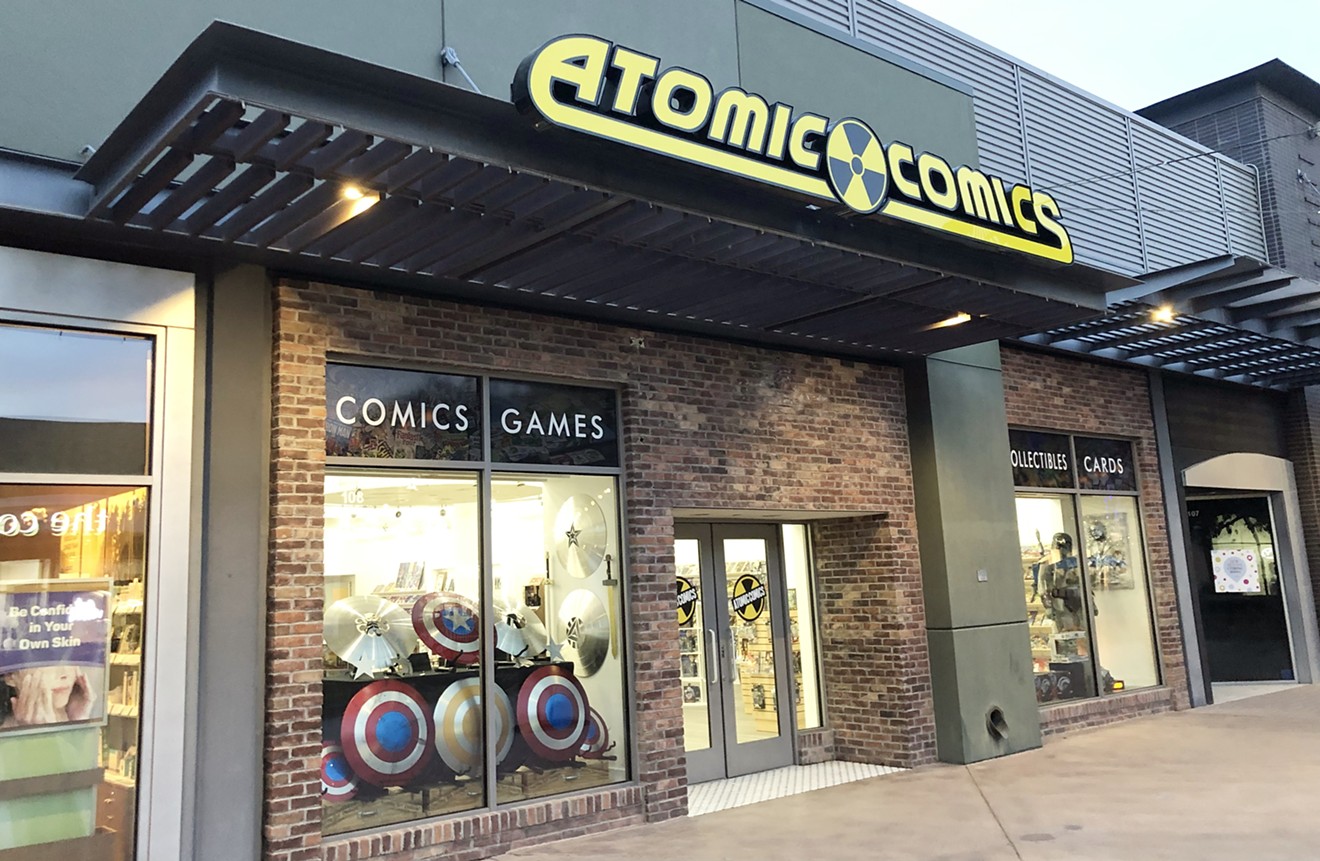 Last month, the 57-year-old Valley resident and lifelong geek brought his store Atomic Comics back from the dead a decade after it went out of business. The shop, a staple of the Valley’s comic book scene in the 1990s and 2000s, reopened in late November at Gilbert’s SanTan Village shopping mall near Williams Field Road and the Loop 202 freeway.

Like the members of The Avengers battling Thanos, Malve teamed up with some friends to make it happen as he co-owns the store with business partners (and fellow comic book geeks) Scott Hagen and Joe Furman.

“They helped make it happen,” Malve told Phoenix New Times. “Without their help, I don’t necessarily know if Atomic Comics would’ve ever come back.”

It’s a change from Atomic Comics original 25-year run from 1986 to 2011 when Malve was the sole owner and operated four locations across metro Phoenix. During its heyday, the chain was the go-to spot for comics and collectibles in the Valley, as well as a nationally recognized brand.

The chain hosted appearances by comic book creatives on the regular. Malve had folks like Stan Lee and Todd McFarlane on speed dial. And a fictionalized version of Atomic Comics even appeared in the 2010 superhero flick Kick-Ass.

“Those were the glory days of Atomic Comics,” Malve says. “People came to us to get their comics. We had artists from Marvel, DC, and Image coming in for in-store appearances. When Public Enemy had a comic book out they played a concert at our Metrocenter store.”

Those glory days didn’t last forever, though. In the fall of 2006, a 16-year-old uninsured drive plowed through the front window of the Atomic Comics store in Mesa (the chain's biggest location), rupturing a water main and causing more than $1 million in damages.

“It was devastating. I was underinsured at the time, which was my fault since my policy covered all of our stores instead of that specific location, so there wasn't enough to cover all the damages,” Malve says. “I had to rebuild my biggest store out of my own pocket and we were closed all through the holidays that year.”

Two years later, the Great Recession hit, which exacerbated Atomic Comics’ financial woes. More bad luck followed, both for the chain and the comics industry in general, which saw a downturn in business at the beginning of the 2010s.

Atomic Comics founder and co-owner Mike Malve.
Jack Malve
“There were more people buying stuff online, the digital revolution was just beginning, everyday customers were buying less, and the numbers were down. It was a time when everybody thought the industry was collapsing and a lot of stores were closing,” Malve says. “We had a pretty big overhead with the rent and everything at [multiple] locations, so it was harder for us to fight through it than if I had a couple of stores.”

It added up and Malve finally declared bankruptcy and pulled the plug on Atomic Comics in 2011, announcing the news in an e-mailed newsletter to the chain’s customers and fanbase.

“It was a very sad day for me personally when we shut our doors, but also for all the people who shopped there over the years,” he says. “Things kept changing and we tried keeping up, but it was too much to absorb.”

Malve stayed involved in the comics industry, albeit behind the scenes. He launched Captured Planet Studios, created trailers for upcoming comic book titles being put out by Marvel Comics and digitized back issues for publishers like Image and IDW.

Meanwhile, Malve says he eventually wanted to own another comic book store if the right opportunity presented itself. Earlier this year, it finally happened, courtesy of Scott Hagen.

The local entrepreneur and restaurateur behind upscale eatery Craft 64 was an Atomic Comics regular back in the day. Over the years, the pair had discussed the possibility of opening a store together for years, Malve says.

"Bringing back Atomic Comics wasn't a topic of conversation. It was just like, 'Let's open a store,’ which would’ve had a different name,” Malve says. “We kept talking and finally things started happening.”

Especially after Joe Furman got involved. The local systems administrator and fellow comics geek had met Hagen through his restaurant and the two also struck upon the idea of launching a store. Over the summer, they began scouting locations and brought Malve on board.

The trio found a 4,100-square-foot space at SanTan Village in Gilbert a few doors down from a Harkins Theatres location. Since it was similar in some respects to a couple of Atomic Comics' old locations, Malve was inspired to revive his old brand.

"As we were putting everything together, I was like, 'Since we're at a mall, why are we not calling it Atomic Comics?’ he says. “It just made sense.”

Since reopening on November 24, Malve says the store has been a hit.
KEEP PHOENIX NEW TIMES FREE... Since we started Phoenix New Times, it has been defined as the free, independent voice of Phoenix, and we'd like to keep it that way. With local media under siege, it's more important than ever for us to rally support behind funding our local journalism. You can help by participating in our "I Support" program, allowing us to keep offering readers access to our incisive coverage of local news, food and culture with no paywalls.
Make a one-time donation today for as little as $1.