Here’s How to See Comet SWAN Over Arizona 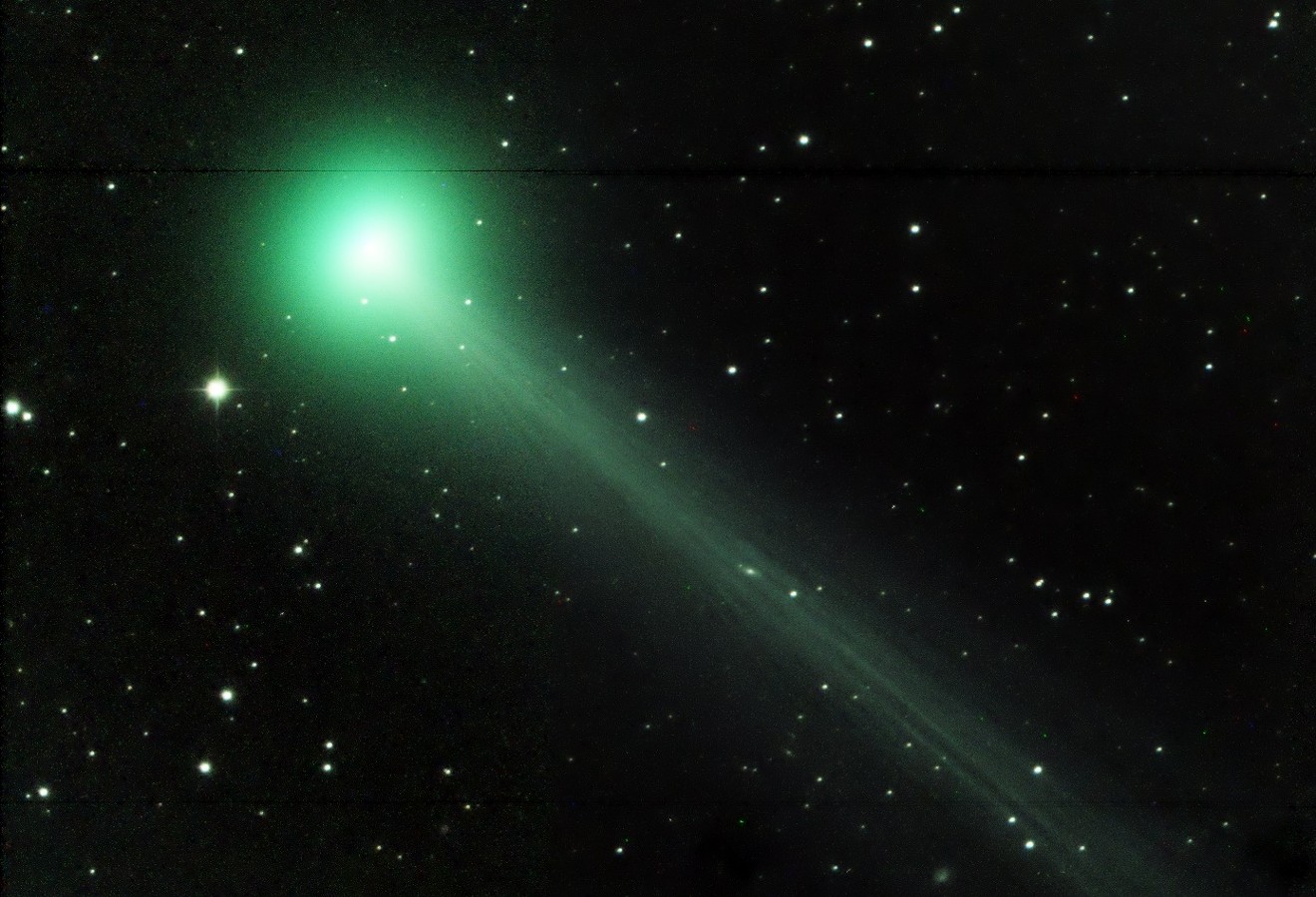 A photo of Comet SWAN from earlier this month. Diego Toscan/CC BY-SA 4.0/Wikimedia Commons (cropped)
It’s been a busy spring for skywatchers in Arizona. There have been supermoons, meteor showers, and highly visible flyovers by the International Space Station taking place in the heavens.

Now, the cosmos has gifted us with the chance to have a cometary encounter between now and the end of the month.

Comet SWAN will be visible from Arizona nightly for the next couple of weeks, allowing you the chance to check that experience off your skywatcher bucket list. Just make sure you’ve got a telescope or some binoculars handy, not to mention a bit of patience.

Unlike the great comets that have cruised through our solar system in recent decades, like Hale-Bopp or Shoemaker-Levy 9 back in the ‘90s, SWAN won’t be as brilliant or easily noticeable in the sky. It still will be visible, albeit before dawn or after dusk, and will take some hunting to find.

The comet, officially known as C/2020 F8 (SWAN), was first discovered in March. Astronomers worldwide have hoped it would become more visible and brilliant as it got closer to the sun, instead of fading out as most comets tend to do. (Comet ATLAS from earlier this year was expected to brighten before it went bust and broke apart.)

Claude Haynes of the East Valley Astronomy Club says comets are mercurial like that.

“It's very rare to have a bright, great comet. They're oftentimes very fickle,” he says. “What happens is, you discover a comet far away, you measure its relative brightness, and you think, ‘Oh, and it will grow from there.’ But that's not always the case. Comets don’t always glow at the same rate. Some are greater, some are lesser.”

Comet SWAN has brightened to a small degree since its discovery in March and can only be seen with the aid of a telescope or certain binoculars. You’ll also need to wake up at ungodly hour, since your best chance to see it will come during the early hours on Friday, May 22, and Saturday, May 23.

Still, Haynes says seeing Comet SWAN is an experience that certain skywatchers could enjoy if they’re willing to put in the effort.

“I don't want to undersell it, since it's still fun,” he says. “If somebody has an interest, it's a worthy thing to go and try to find. But just know that there’s some [extra steps] involved. I just don't want the average person to go and end up seeing nothing and say, “Gee, I wasted an hour.’”

If you’d like to catch Comet SWAN (and you have a sense of adventure), here’s what you’ll need to know in order to see it.


So Why Is It Called Comet SWAN?

It was discovered on March 25 by Australian astronomer Michael Mattiazzo using the Solar Wind ANisotropies (or SWAN) imaging instrument, which is onboard the Solar and Heliospheric Observatory satellite currently orbiting Earth.

Where Did It Come From?

Like many comets, it originated in the Oort cloud, the distant sphere of ice and interstellar debris that surrounds our solar system, and took approximately 18,000 years to get to our corner of the cosmos.

Why Isn’t SWAN As Brilliant as Comets Like Hale-Bopp?

Largely because of its composition. Comets are essentially giant balls of dust and frozen gasses like water vapor, ammonia, and methane. According to Mike Marron, president of the Phoenix Astronomical Society, they start melting when approaching the sun, which causes a tail of vaporized gas and dust to form.

“What we're seeing is an atmosphere of dust and gas around the comet, known as the halo, which is stretched into a jet of erupted gas and dust that points directly away from the sun and is blown by the solar wind,” Marron says.

The gas and dust also will catch the sunlight, which causes a comet to glow. Those with more dust (like Hale-Bopp) tend to be brighter and more spectacular whereas SWAN is mostly gas and appears to be fuzzier and dimmer.


So When and Where Will Comet SWAN Be Visible?

From now until Sunday, May 24, SWAN will glow in the northeastern sky near the constellation Perseus for about an hour or so just before sunrise. It’s your best shot to see it, particularly on Friday, May 22, and Saturday, May 23, when the comet approaches its perihelion (or closest point to the sun).

SWAN will then appear more in the northwestern sky starting on Monday, May 25, when it will be closer to the Auriga constellation and appear shortly after sundown, but will be less visible.

During both periods, the comet will be around 10 degrees above the horizon (pro tip: Hold three fingers together at arm's length where the sky meets the land to help determine that).

Nothing but clear skies through the end of the month, according to the forecast.


What Time Should You Look?

Skywatchers will have a small window of roughly an hour to catch the comet each day. Up until May 23, you can start looking from 3:30 to 4 a.m. and watch as the morning twilight begins and causes SWAN to get brighter. Starting on May 25, it will appear about an hour after sunset.


Where’s the Best Location to Try Spotting the Comet?

Somewhere outdoors that’s very dark and has clear views of a horizon unencumbered by mountains. We suggest heading for somewhere on the outskirts of town with little light pollution and wide-open vistas.

Will You Need a Telescope or Binoculars?

Yes, as the comet won’t be visible to the naked eye. Haynes says you’ll have to use a good pair of binoculars (50mm or better) or a telescope at least four inches in length. “It doesn't have to be huge,” he says. “I would say start with low power because you'll want a wider field of view, and then if you have various eyepieces, you could increase it.”

Marron recommends staying aware of the sun’s location at all times. “You really don’t want to be looking anywhere near the sun when it starts rising,” he says.

How Do You Find Comet SWAN in the Sky?

Haynes and other astronomers recommend using nearby stars as reference points before sweeping the area nearby using your binoculars or telescope. Through May 24, the comet will be somewhere between the stars of Algol and Xi Persei in the constellation Perseus. Starting on May 25, it will be closer to Capella. “Since it's not an especially bright comet, you’ll have to really hunt for it,” Haynes says.

For help finding these stars or constellations, try using the website and app Stellarium or any of the other stargazing apps available for Android and iOS. But once you’ve determined SWAN’s location, Haynes recommends stowing your phone.

“Let your eyes adjust to the dark,” he says. “A cellphone can take away your dark adaptation pretty quickly and you want your [pupils] to be as wide open as possible to try to see things that are faint.”

While the above photo is both spectacular and dramatic, it admittedly was taken by pro-level astronomers with high-end gear in an ideal location. Comet SWAN will appear to be a blue-green fuzzy spot followed by a faint tail.

As we mentioned, there’s a chance it could become more visible toward the end of the month as it gets closer to the sun.

"As continues to heat up, it will inevitably give off more gas and hopefully glow much brighter," Marron says. “You never know with comets since they’re so fickle and anything could happen. I've been in astronomy my entire life and have seen stranger things happen.”
KEEP PHOENIX NEW TIMES FREE... Since we started Phoenix New Times, it has been defined as the free, independent voice of Phoenix, and we'd like to keep it that way. With local media under siege, it's more important than ever for us to rally support behind funding our local journalism. You can help by participating in our "I Support" program, allowing us to keep offering readers access to our incisive coverage of local news, food and culture with no paywalls.
Make a one-time donation today for as little as $1.