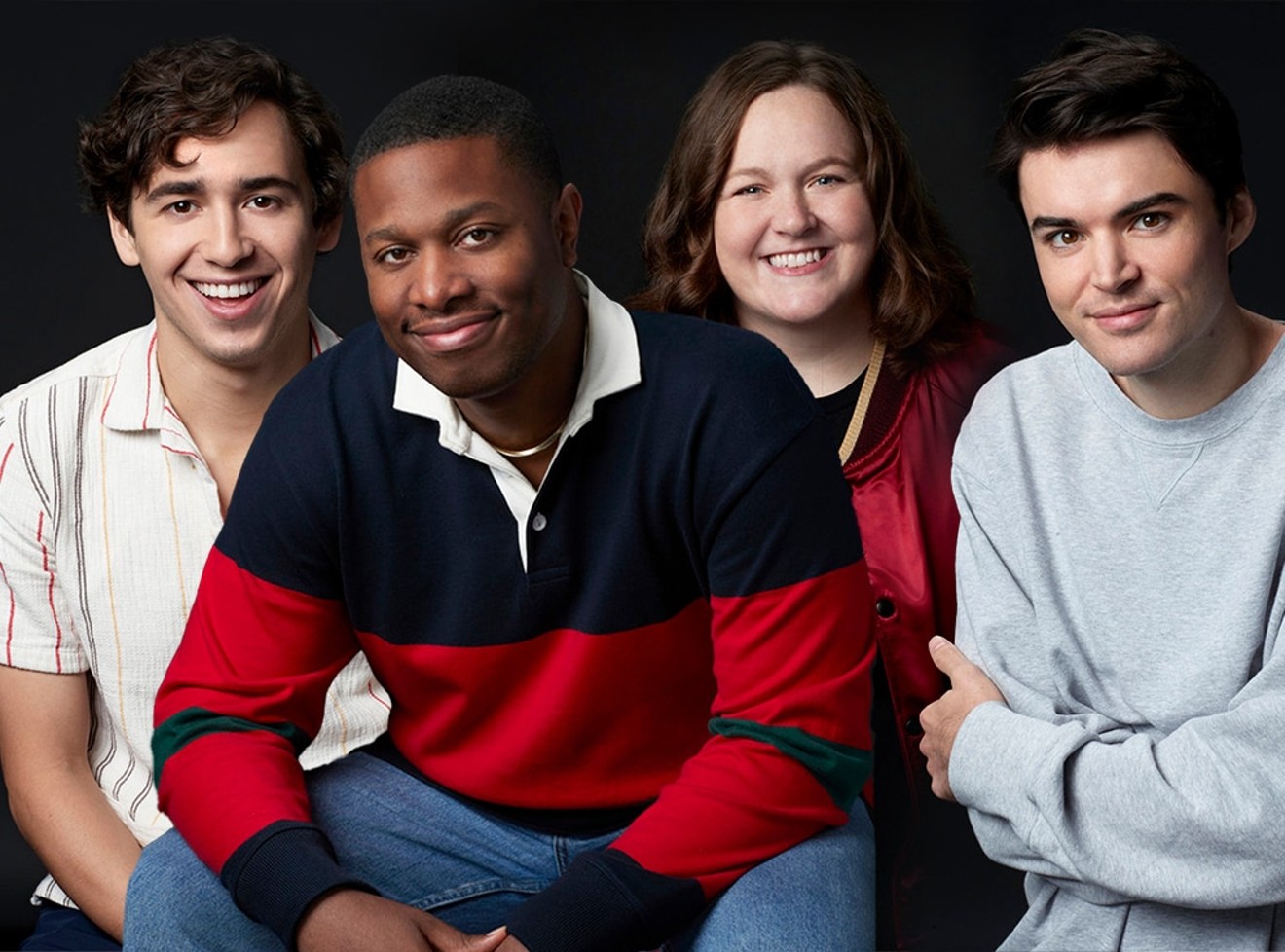 The four new additions to the cast of Saturday Night Live include, from left: Marcello Hernandez, Devon Walker, Molly Kearney and metro Phoenix native Michael Longfellow. Mary Ellen Matthews/NBC
When Saturday Night Live needs a real comedian to fill out the cast, where does the popular NBC sketch comedy-variety show turn for its 48th season? Forget New York and Los Angeles, the bicoastal entertainment capitals of the world. Phoenix might as well be Comedy Central because that’s where Michael Longfellow became funny enough to fit in as one of SNL’s four freshest, featured faces for the new season that premieres in Studio 8H at 30 Rockefeller Plaza on October 1.

Longfellow, a 28-year-old metro Phoenix native and Arizona State University graduate, joins other first-timers Marcello Hernandez of Miami, Molly Kearney of Cleveland, and Devon Walker of Austin, Texas, on the award-winning series. It has earned 93 Emmys — counting trophies for its specials and short form series — since it debuted in 1975. The latest honor for the SNL team headed by creator and executive producer Lorne Michaels arrived on September 12 for Outstanding Variety Sketch Series.

"This will be a transition year, and the change years are always difficult but also really exciting because there's new people and things are changing and a different generation comes into the show," Michaels told the media backstage that night after accepting the Emmy.

A couple of days later, the cast additions were announced. Longfellow took to his Instagram account, where he has 107,000 followers, to crack wise: “Get to be on tv this year I'm sorry!”

That self-deprecating humor apparently has served Longfellow well since he earned a bachelor of arts degree in English literature at ASU in 2016.

New Saturday Night Live featured performer Michael Longfellow grew up in the Valley and graduated from Arizona State.
Mary Ellen Matthews/NBC
In a 2016 interview on ASU’s website ahead of the spring commencement, Longfellow said, “I did comedy for the first time as a freshman and immediately realized it was the only thing I really wanted to do. I knew if I was going to have to go to college, a degree that dealt with words and language would best suit my interests.

"Also, math was difficult, and when science became more than baking soda volcanoes or putting small things in water to watch them get bigger, I really had nowhere else to turn,” he added.

Metro Phoenix clubs and venues where he has worked include Stand Up Live, Valley Bar, the Tempe Improv and Desert Frostover 2015, a two-day event held that December featuring seven comedians, more than 20 bands, food trucks, and other activities.

Now based in Los Angeles since graduating, Longfellow has a list of credits, mostly as a stand-up comedian, that include: a blink-and-you’ll-miss-him stint (“for 48 seconds,” he joked) on a 2017 episode of the Fox comedy Laughs; his late-night TV debut on Conan in 2018; a well-received appearance on 2019’s Bring the Funny, an NBC comedy/reality series; and a spot at the 2017 New York Comedy Festival, where he was heralded by TBS as one of its “Comics to Watch.”

Another career steppingstone to consider for Longfellow is as one of eight “fresh comedic voices” on the inaugural Netflix’s Introducing ... stand-up showcase in L.A., that aired on Netflix Is a Joke’s YouTube channel and other online outlets.
His jokes in that nearly eight-minute monologue primarily pertained to his parents, who split a while ago, leaving Longfellow to try to get along with one father and two stepdads. “Three good ones, too,” the comic pointed out amid bursts of laughter during the bit. “My first one, Tom, the OG. … We’re very different. He’s very strict, very intense. My dad’s a divorce attorney who’s been divorced multiple times. I mean, this guy walks the walk. This guy … is he a bad husband or a workaholic?”

That short session certainly left them laughing, but now the pressure might fall on the shoulders of Longfellow and his fellow newbies as they prepare for Season 48 of Saturday Night Live. Especially since the show recently said goodbye to prominent players such as Kate McKinnon, Pete Davidson, Kyle Mooney, and Phoenix’s own Aidy Bryant, who graduated from Xavier College Preparatory in 2005. A cast member since 2012, the 35-year-old Bryant was a three-time Emmy nominee on SNL. So what happens as the torch is passed from one Phoenician to another? Hopefully, it’s back to funny business as usual.

In that ASU interview six years ago, Longfellow knew where he was headed, but apparently didn’t realize how long it would take to get there. Asked about his plans after graduation, he offered, “I’m busting a Kimmy Schmidt and moving to New York City to be a big-time New York City comedian. Comedy shows are primarily at night, so hopefully I can fill my days up with a writing position somewhere nice. If that doesn’t work, you can catch me serving McMuffins at your local Brooklyn McDonald’s.”

Even comedians deserve a break today, tomorrow and next month. See if Longfellow has a chance to chew up the scenery during SNL’s October 1 season opener, which also will be streamed live on Peacock. The show is scheduled to include Top Gun: Maverick actor Miles Teller as host, with Kendrick Lamar as the musical guest.
KEEP PHOENIX NEW TIMES FREE... Since we started Phoenix New Times, it has been defined as the free, independent voice of Phoenix, and we'd like to keep it that way. With local media under siege, it's more important than ever for us to rally support behind funding our local journalism. You can help by participating in our "I Support" program, allowing us to keep offering readers access to our incisive coverage of local news, food and culture with no paywalls.
Make a one-time donation today for as little as $1.