Works by several artists installed in the windows at Modified Arts in June 2020. Modifed Arts
Modified Arts in Roosevelt Row reopened in October, following a lengthy pandemic pause. That’s good news for the city’s cultural life, as Modified Arts has played a key role in developing Phoenix’s art and music scenes through the years.

The venue decided to temporarily close during the initial wave of shutdowns, when concerns about Covid-19 caused the NBA to suspend the 2019-20 season and South by Southwest organizers decided to cancel their 2020 festival.

At the time, artists Christopher Jagmin, Ann Morton, and Safwat Saleem were getting ready to install a collaborative exhibition. But that exhibit, like others scheduled to follow it, never happened. Instead, the gallery found a way to adapt to pandemic life.

“We had a few months of stagnancy, but then we began organizing window installations and incorporating more performance works,” says Merryn Omotayo Alaka, a Phoenix-based artist who serves as the gallery’s director and curator.


Their red brick building, which is located at 407 East Roosevelt Street, has a wide bank of street-facing windows that proved useful for adapting to pandemic life. Audiences could watch indoor performance from the street, and artists had a creative canvas for showing film and visual art.

“It turned out to be a great way to collaborate with artists working in different areas,” Alaka says. “I think it’s something you’ll see us do more of in the future.”

Douglas Miles showed Future Intercepts in the windows at Modified Arts in April 2021.
Modified Arts
Now that the indoor space is open with regular hours again, artwork fills the walls.

Collectively, they explore a range of personal and political issues related to identity, memories, isolation, relocation, immigration, belonging, and home. They’re themes that resonate within the dual context of pandemic life and political upheaval, in Arizona and beyond. 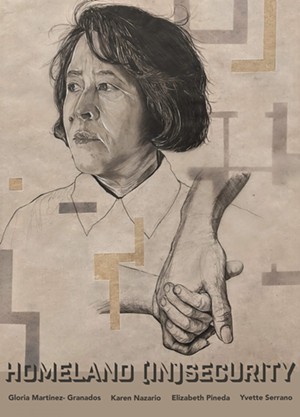 Poster for the current exhibition at Modified Arts.
Modified Arts
“A lot of this work was made during the pandemic, and it’s interesting to see how these artists use different materials and styles to address similar concerns,” Alaka adds.

Alaka says she’s still finessing the exhibition lineup for the next few months, which includes working to reschedule artists whose shows didn’t open due to the pandemic.

In March 2022, Modified Arts will be showing a new exhibition by Jagmin, Morton, and Saleem, who decided to make new work rather than merely mount the exhibit they’d planned for March 2020.

Turns out, the gallery underwent another change during its pandemic pause. Miguel Monzón, an artist who’d been serving as the gallery director, decided to focus on his MFA program at ASU, and Alaka went from being a curatorial assistant to heading the creative space.

Amid the pandemic, she’s given a lot of thought to how she’d like to activate the gallery moving forward. “I’ve been doing studio visits with some artists who are new to Phoenix, and with longtime artists who’ve never had a show at Modified Arts,” she says.

“My goal as a Black artist and woman has always been to bring more diversity to the space, and to explore more issues related to gender,” Alaka adds. She’s planning to bring in guest curators who can help to make that happen.

A lot has happened since the gallery celebrated its 20th anniversary with “A City, Modified,” an exhibition that opened on First Friday in November 2019.

“The gallery has such an important history and role in the community, and I really want to assure that we continue to stay relevant.”
KEEP PHOENIX NEW TIMES FREE... Since we started Phoenix New Times, it has been defined as the free, independent voice of Phoenix, and we'd like to keep it that way. With local media under siege, it's more important than ever for us to rally support behind funding our local journalism. You can help by participating in our "I Support" program, allowing us to keep offering readers access to our incisive coverage of local news, food and culture with no paywalls.
Make a one-time donation today for as little as $1.